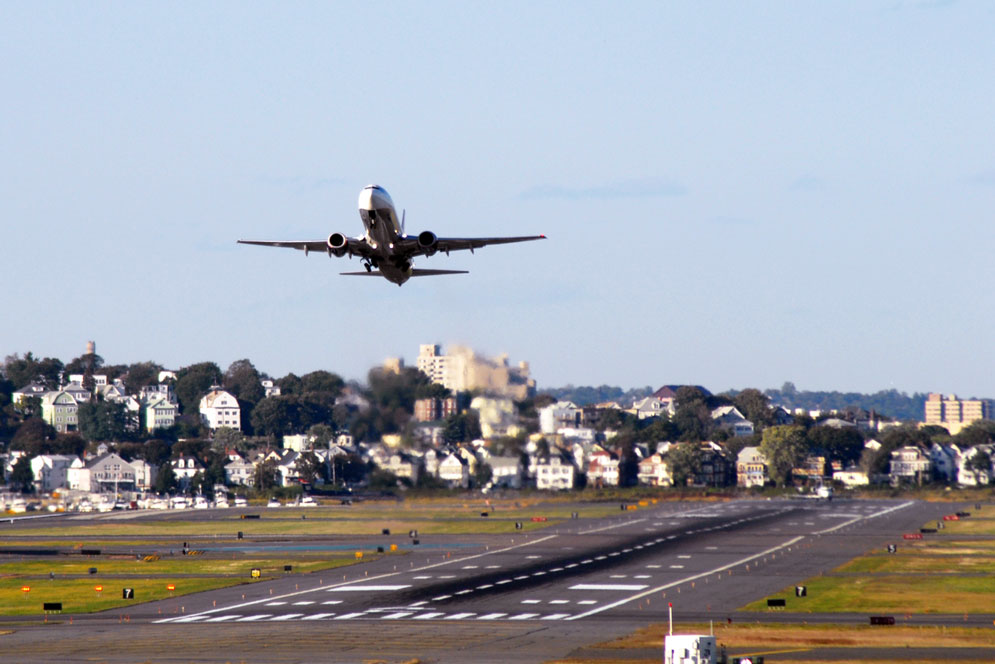 BU students will study noise spillover from Logan Airport into residential areas of Milton, Mass., this semester. Photo by SPO123/iStock

Last year, Carrie Preston and her colleagues teaching the Kilachand Honors College class on Global Health invented fictional crises to test what their students had learned during the semester. Yet with opioid addiction and air pollution afflicting real people throughout the city and in surrounding communities, they figured, why not use a real-life laboratory?

So this semester, their students will team with officials in Winthrop, Mass., on how to address that city’s health scourges. “More and more, I wonder why we ask students to work so hard preparing themselves to impact the world later on,” says Preston, the college’s director and a College of Arts & Sciences professor of English and of women’s, gender, and sexuality studies. “In many instances, their labor can have an impact right now. MetroBridge is building that possibility at BU.”

The MetroBridge she refers to is a new program created by BU’s Initiative on Cities that puts the brainpower and the time of faculty and students at the disposal of New England municipalities. Preston is among the professors in three BU schools who will assign various classes—involving about 250 students, undergraduate and graduate—on projects including Winthrop and seven other municipalities.

How much noise from Logan Airport assails ears in Milton, Mass.? CAS political science students will help the town calculate that. How should New Bedford, Mass., map out a downtown district to host start-ups and artist studios and housing? City planning students from Metropolitan College will lend their insights, while management studies students from the Questrom School of Business will help the city plan a needed downtown grocery store. How satisfied are residents of Providence, R.I., with city services? Other CAS political science students will design a survey to ask them.

“We’ll kind of sit in the middle of it and do the matchmaking” between schools and communities, says MetroBridge faculty director David Glick, a CAS assistant professor of political science. Students in his Special Topics in Public Policy class will help officials in Watertown, Mass., draft regulations governing Airbnb and other home-sharing services—exposing them to broader policy matters, Glick says.

“Airbnb issues are also tied to bigger questions about housing, affordability, changes in neighborhoods, and other questions that are central to eastern Massachusetts and beyond,” he says. “One thing I hope the students come away from this project with is an understanding of the links between policy and politics. The issues of Airbnb are as much about whose voices are influential, who government responds to, which concerns it prioritizes, and how it balances issues as they search for a technically optimal solution.”

Watertown will gain as much, says the town’s community planning and development director Steve Magoon: “We have been struggling with how best to regulate this growing industry. There are a number of conflicting interests and directions we could go as a community. We are hoping that with the help of [MetroBridge], we can divine the best solution to these issues and create a regulatory framework that will best satisfy our conflicting interests.”

MetroBridge program manager Emily Robbins says the initiative will be funded for its initial two years by the College of Arts & Sciences and won’t scrimp on the range of projects and schools that could be involved. “We don’t see it having any limitations,” she says. “It can be across the entire University. The agenda is going to be driven by what the partnering city really needs.”

For partners, MetroBridge seeks midsize-to-large communities that are within a day’s trip from campus (the population requirement is a little looser for Massachusetts communities). Robbins and Glick also are talking with BU deans and faculty to check which classes might be appropriate homes for certain projects. Of course, availability matters; “We certainly can’t just dump projects on classes and say, ‘Professor, this year you are doing this,’” says Glick.

“The Initiative on Cities aims to advance urban leadership,” says Graham Wilson, IOC director, “and support the next generation of city leaders.” Wilson, a CAS professor of political science, says MetroBridge “will help us achieve these goals on an even larger scale by establishing a range of cross-discipline, collaborative projects for our students and neighboring cities and towns to work on together.”