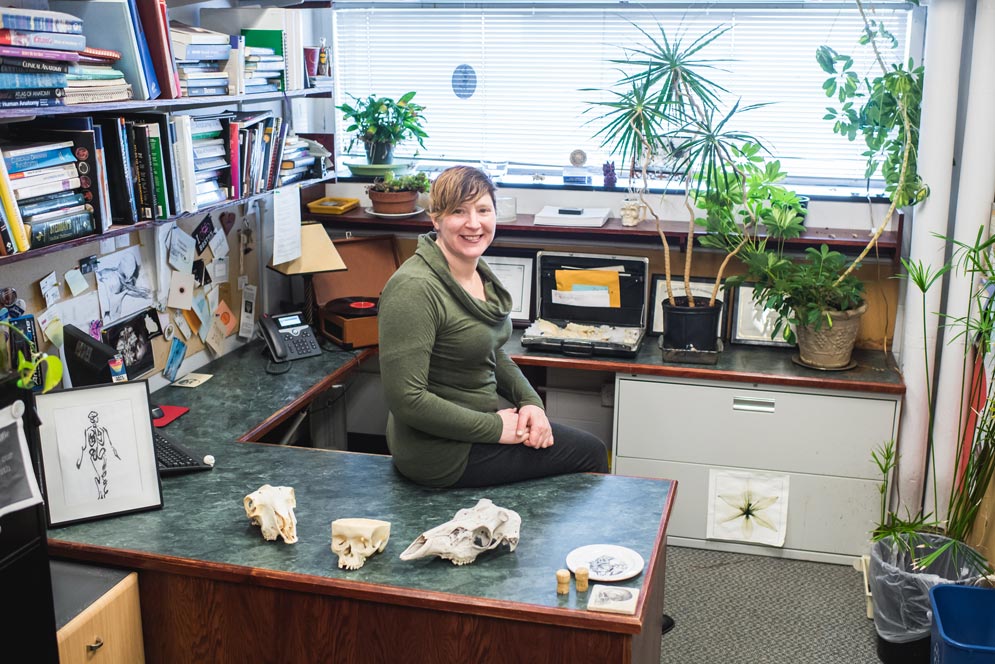 Click on the circles above to see more of what Ann Zumwalt displays in her School of Medicine office.

How do you get a sheep to exercise? Just ask Ann Zumwalt, a School of Medicine associate professor of anatomy and neurobiology, who has sheep bones on display in her office.

As a PhD student at Johns Hopkins University School of Medicine, Zumwalt wrote her dissertation on the effect exercise has on muscle attachment sites. As part of her research, she put sheep on treadmills to exercise, and then compared their bone morphology, or structure, to those of sheep who had not been exercised.

It wasn’t easy to convince her subjects to cooperate, Zumwalt says, until she learned that there are two tricks to sheep cooperation. The first is that grain food is roughly equivalent to dog treats for pooches, and second, sheep don’t like to be alone. “So if you put them on a treadmill and you put a mirror in front of them, they don’t feel alone anymore. They think, I’m with a buddy,” she says.

Zumwalt, who came to BU in 2007, is the course director for the biomedical sciences and medical gross anatomy courses, where she oversees teaching. She describes the latter course as a “rite of passage” for medical students since it’s where they dissect their first human body (the process was described in-depth in a previous article in BU’s alumni magazine, Bostonia. She says it’s her job to help them think and emotionally process this ordeal.

“It’s weighty in the sense that we’re not just dealing with anatomy, but helping the students through one of their first experiences with death and dying,” Zumwalt says. “It’s a lot of navigating some of the gray area of being in medicine, where they have to learn how to do something that’s difficult but necessary, which is a lot of what being a doctor is. You have to do things that most people don’t normally do in regular life. I consider it to be a really important part of my job.”

In our series “Office Artifacts,” BU Today highlights interesting artifacts professors and staff display in their office. Have a suggestion about someone we should profile? Email orourkej@bu.edu.

There are 5 comments on Office Artifacts: Ann Zumwalt