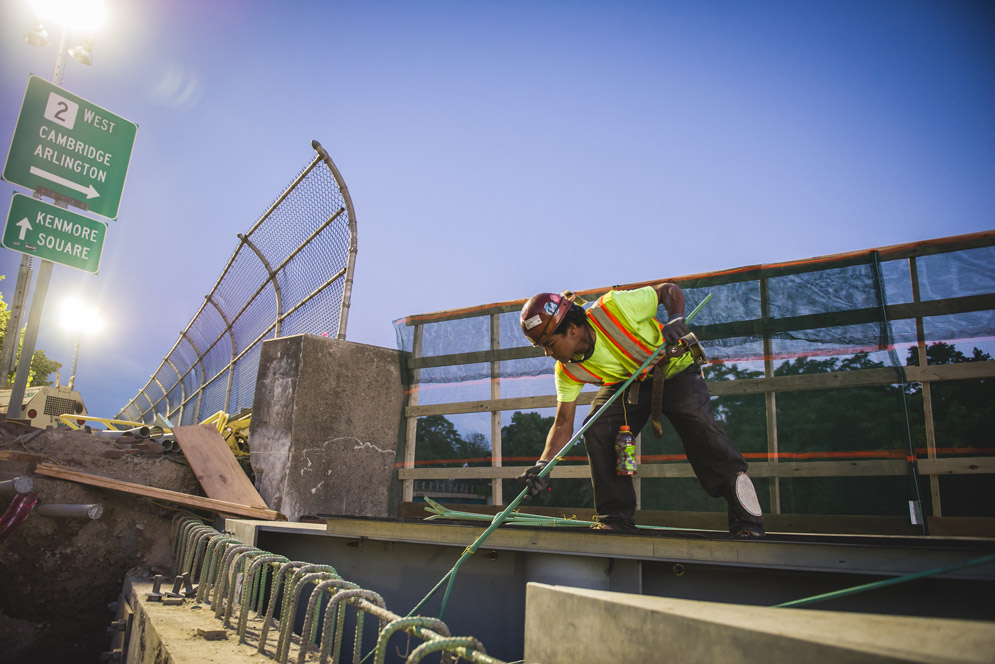 The Massachusetts Department of Transportation (MassDOT) plans to announce in the coming weeks the date for the temporary closing of the Commonwealth Avenue bridge for reconstruction work this summer.

The commonwealth expects to close the bridge, which carries Comm Ave traffic and MBTA Green Line B trolleys and spans the Massachusetts Turnpike (I-90), for approximately two July-August weeks to replace its westbound lanes. Last summer, the eastbound lanes were replaced.

“MassDOT looks forward to finalizing the dates for intensive construction operations this summer and providing more information on the associated impacts in the coming weeks,” department spokesman Patrick Marvin says.

“We learned a great deal from last summer’s shutdown, which has helped inform our planning and preparation efforts” for this summer, says Thomas Daley, BU’s associate vice president for facilities management and planning. “Overall, 2017 was successful because we were able to effectively maintain essential operations while minimizing our physical presence on campus during their project.”

“At this early point, we want to stress the importance of once again planning ahead and preparing for the project’s impact to our daily operations. When MassDOT formalizes this year’s shutdown dates, we will inform the community as we finalize our preparations.”

BU’s website on the work will be updated as information becomes available.

MassDOT scheduled both phases of the replacement for the time of year when bridge traffic—foot, two-wheel, four-wheel, and more-wheels—is significantly reduced. The department’s website says that this summer’s reconstruction will be similar to the work done last summer.

Comm Ave is expected to be closed to motor vehicle traffic between Kenmore Square to the east and Packard’s Corner to the west for 15-and-a-half days. Only “patrons of businesses, residents, MBTA buses, emergency services, pedestrians, and bicyclists” will be allowed over that stretch, according to the website.

The BU Bridge will close for the same length of time to all general traffic, with only pedestrians and bicyclists permitted to cross. The Mass Pike, between its Allston interchange and the Beacon Street overpass, will be reduced to one or two lanes in both directions for an estimated nine-and-a-half days. Its east on-ramp from Cambridge Street/Soldiers Field Road will close during that time, while the Exit 20 off-ramp from the westbound Pike to Brighton/Cambridge/Storrow Drive will close intermittently.

As was the case last year, the MBTA B trolley will be replaced with shuttle buses between Babcock and Blandford Streets to carry people along Comm Ave during the closure. The MBTA CT2 and 47 bus routes will be detoured during the closure, while service on its commuter rail line to Framingham and Worcester, and on Amtrak’s Lake Shore Limited line, will be affected for two weekends—the state has not yet announced how—but will maintain its usual schedule on weekdays.

Last summer’s work closed the area around the bridge for three weeks. During the closure, from late July through mid-August, workers replaced the bridge’s eastbound lane, sidewalk, bike lane, and both sides of the MBTA Green Line trolley area. MassDOT says it shortened the project’s duration from what would have been several years by using accelerated construction techniques. The eastbound lane was replaced with prefabricated components—267 concrete panels and 44 girders—which were ferried to the work site, where 200 workers labored around the clock to assemble them. These techniques will be used again this summer for the westbound work.

The $110 million project to replace the bridge’s entire concrete deck and steel support beams, which have deteriorated over their half-century of life, is part of the commonwealth’s major improvement work to Comm Ave that is scheduled to end in 2019.