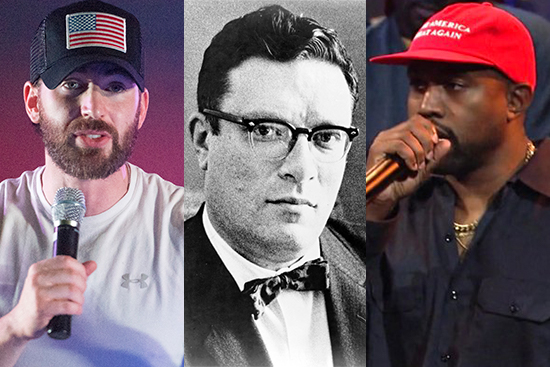 Only in this new era of President Trump could one story bring together the actor who played Captain America, the rapper Kanye West, and the late Russian scholar and prolific author Isaac Asimov, a BU College of Arts & Sciences professor of biochemistry.

But that’s what just happened over the weekend.

To back up, West was the musical guest on the season premiere of Saturday Night Live (yes, the episode where Cambridge actor Matt Damon parodied Supreme Court nominee Brett Kavanaugh). At the very end, as the show was going off air, West began what some described later as a pro-Trump speech to the audience, prompting some boos from the crowd and stunned silence from cast members.

Then, at 3:35 pm on Sunday, West posted on Twitter a photo of himself on a private jet wearing a red “Make America Great Again” hat, along with this caption: “This represents good and America becoming whole again. We will no longer outsource to other countries. We build factories here in America and create jobs. We will provide jobs for all who are free from prisons as we abolish the 13th amendment. Message sent with love.”

Well, that tweet quickly took off thanks to West’s 28.5 million followers. But an hour and a half later, it also caught the attention of the actor Chris Evans, who grew up in Sudbury, Mass., and is best known for his role as Captain America in the Marvel Comics film franchise.

Captain America retweeted West’s post to his 9.6 million followers, along with his own two cents: “There’s nothing more maddening than debating someone who doesn’t know history, doesn’t read books, and frames their myopia as virtue. The level of unapologetic conjecture I’ve encountered lately isn’t just frustrating, it’s retrogressive, unprecedented and absolutely terrifying.”

The Twitter spat could have ended there. But that’s when things got downright weird, as if Captain America vs. Kanye West wasn’t weird enough. Evans posted an image of Isaac Asimov, silver-haired with big bushy sideburns, along with this Asimov pearl of wisdom: “The strain of anti-intellectualism has been a constant thread winding its way through our political and cultural life, nurtured by the false notion that democracy means that ‘my ignorance is just as good as your knowledge.’”

The line is from an article Asimov wrote for Newsweek, titled “A Cult of Ignorance,” that appeared on January 21, 1980. (Asimov’s entire collection is held by BU’s Howard Gotlieb Archival Research Center, 470 published books and hundreds of his shorter works and manuscripts, photographs, and more.)

Evans tweeted that quote out with a single word: “This.”

West quickly clarified his original post, saying he didn’t think the 13th amendment should be abolished, merely amended. But by then, Twitter had erupted, and other celebrities chimed in to support Evans, like singer Lana Del Rey, who wrote: “Trump becoming our president was a loss for the country but your support of him is a loss for the culture.”

As for the one party in this MAGA saga who is no longer living, Asimov, who died in 1992 at age 72, was no stranger to strong words that stirred things up. As a result of McCarthyism in the early 1950s, Asimov’s writings in the 1960s caught the attention of the FBI, which investigated whether he might have been a known Soviet spy. Of course, nothing was found.

Born in Russia, Asimov’s family immigrated to the United States when he was three years old. After he completed his studies at Columbia University, Asimov came to BU in 1949. A press release at the time said: “Isaac Asimov becomes a first-year instructor of biochemistry at the School of Medicine. Asimov, the scientist and author, was writing pulp science fiction stories in his spare time at his Somerville home while doing cancer research at the School of Medicine.”

By the late 1970s, Asimov was a CAS professor of biochemistry, but by then he was more of an occasional lecturer.

In addition to winning Hugo and Nebula Awards, one of his science fiction novels, I, Robot, was adapted into the 2004 sci-fi film I, Robot, starring Will Smith.

There are 3 comments on Kanye West, Chris Evans, and Isaac Asimov