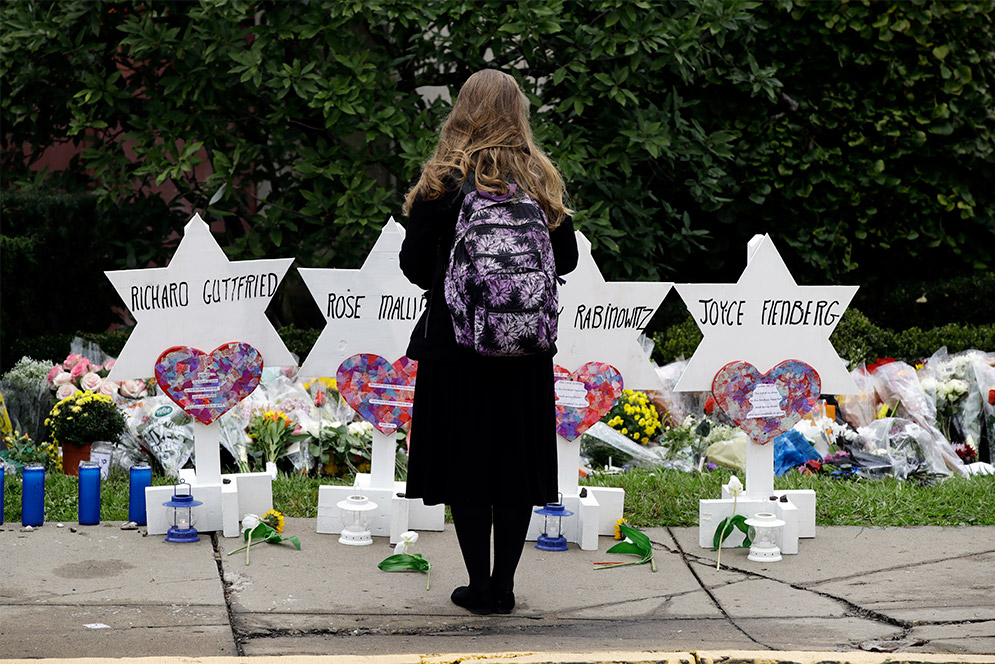 The Stars of David in front of the Tree of Life Synagogue display the names of those killed in the deadly shooting at the synagogue in Pittsburgh, Pa., on Saturday, October 27. AP Photo/Matt Rourke

Lone gunman and avowed anti-Semite Robert Bowers walked into Pittsburgh’s Tree of Life synagogue on Saturday, October 27, and murdered 11 people, wounding another 6. The massacre sent shock waves across the nation and around the globe and comes at a time when attacks on Jews are on the rise both in the United States and across Europe.

The words of one of BU’s most famous professors, the late Elie Wiesel (Hon.’74), are now more relevant than ever. A writer, humanitarian, Holocaust survivor, and Nobel Peace Prize laureate, Wiesel, who died in 2016 at age 87, spent much of his life reminding the world of the dangers of indifference and hate and the importance of speaking up against injustice and intolerance. At the time of his death, he was BU’s Andrew W. Mellon Professor Emeritus in the Humanities and a College of Arts & Sciences professor emeritus of philosophy and religion.

Elie Wiesel—in his own words:

“I swore never to be silent whenever and wherever human beings endure suffering and humiliation. We must always take sides.”

“No human race is superior; no religious faith is inferior. All collective judgments are wrong. Only racists make them.”

“Someone who hates one group will end up hating everyone—and, ultimately, hating himself or herself.”

“In any society, fanatics who hate don’t only hate me—they hate you, too. They hate everybody.”

“There may be times when we are powerless to prevent injustice, but there must never be a time when we fail to protest.”

“We must always take sides. Neutrality helps the oppressor, never the victim. Silence encourages the tormentor, never the tormented. Sometimes we must interfere. When human lives are endangered, when human dignity is in jeopardy, national borders and sensitivities become irrelevant. Wherever men or women are persecuted because of their race, religion, or political views, that place must—at that moment—become the center of the universe.”

“Action is the only remedy to indifference: the most insidious danger of all.”

Part two of the Fall 2018 Elie Wiesel Memorial Lectures, “After Kristallnacht: The Routinization of German State Violence in the East,” with Omer Bartov, a Brown University professor of European history, is tonight, Monday, October 29, at 7 pm in the Photonics Center Colloquium Room, Room 906, 8 St. Mary’s St. Part three of the lecture series, “Lessons from the Past: From Kristallnacht to the Modern Refugee Crisis,” with Mark Hetfield, president and CEO of HIAS, is on Monday, November 12, at 7 pm at the School of Law Auditorium, 765 Comm Ave.

The Words of Elie Wiesel (Hon.’74) Are More Urgent Than Ever after Pittsburgh Tragedy

There is 1 comment on The Words of Elie Wiesel (Hon.’74) Are More Urgent Than Ever after Pittsburgh Tragedy

The Words of Elie Wiesel (Hon.’74) Are More Urgent Than Ever after Pittsburgh Tragedy
1
share this