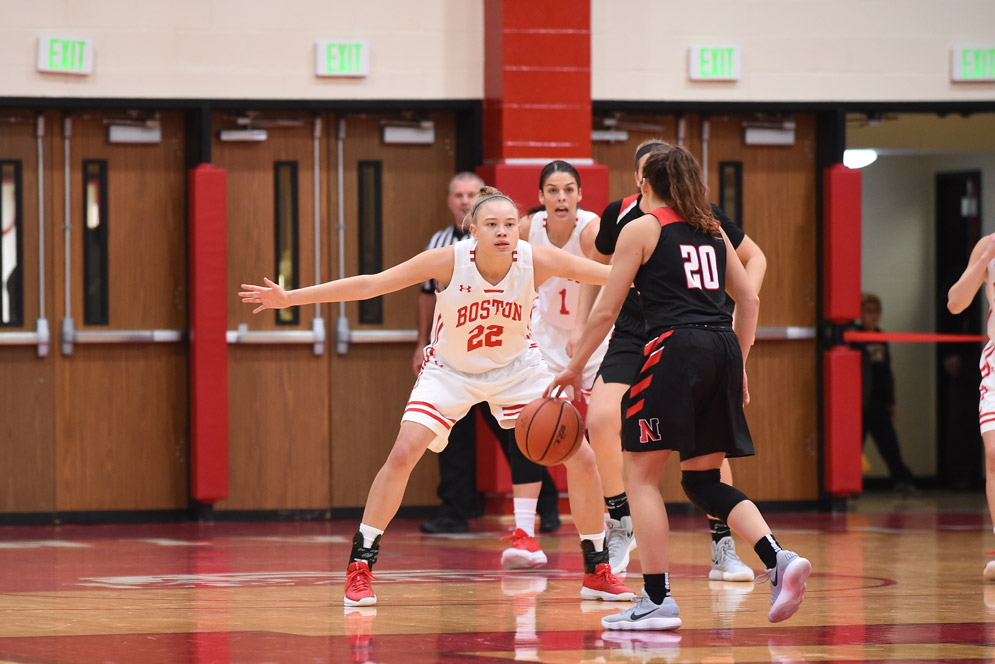 Ask her BU women’s basketball teammates to describe three-time captain Corrine Williams (CGS’16, COM’18) and you’ll hear about her leadership skills and versatility on the court. Ask head coach Katy Steding and she cites another quality.

“I think of somebody who’s probably the most consistent person I’ve ever met,” Steding says. “She’s always the same. You know exactly what you’re gonna get when you talk to Corrine. She’s caring, she’s steady.”

On paper, Williams’ stats won’t blow you away: 8.9 points, 5 rebounds, and 2.2 assists per game. What has made her an invaluable part of the team is her ability to command the respect of her teammates and her tenacity in helping the team struggle through a couple of lackluster seasons to become a real presence in the Patriot League.

The coach recalls the moment she and her staff realized Williams had the potential to lead the team. During a game at the start of the 2015–2016 season, Williams shouted some “choice words” on the baseline to her teammates, Steding says. The coaches side-eyed one another, realizing that Williams was ready to hold people accountable.

“She doesn’t get emotional because she’s so steady, so when she does get emotional, it really carries a lot of weight,” Steding says. “Coaches—we get emotional all the time, so sometimes it doesn’t carry as much weight because there’s this: ‘She’s amped up about turnovers again. She wants us to box out again.’ But when somebody like Corrine really lets you have it, then it’s like, ‘Wow, okay. This is really serious.’”

She’s “very, very level-headed,” says Naiyah Thompson (CAS’19, Sargent’19). “Regardless of if we’re having a rough practice or a rough game, whether we’re behind or we’re ahead, she keeps us on an even keel.”

“As I’ve gotten older,” Williams says, “when we’re all together and a few girls starting getting rowdy, I’m definitely the one who’s the peacemaker.”

At 6’1”, she has the size of a forward and the speed of a guard and has proven herself to be the ultimate jack-of-all-trades on the court. She plays “every position except the point guard,” Tenisha Pressley (Sargent’21) says.

“Throughout my whole career,” Williams acknowledges, “I’ve just played wherever I was needed. Wherever coach needs me to play, I can do it.”

Given her versatility and her leadership skills, it’s hard to imagine that at one point she contemplated walking away from her college basketball career.

A native of Bloomfield, Conn., Williams’ love for basketball came naturally. Her father had played at Eastern Connecticut State University. By the time she was in eighth grade, she had received an offer to play from Assumption College. “You always hear from your coaches and your parents that you can play at the next level, and you can go to school and get a free education,” she says, but it wasn’t until colleges started reaching out to her that she began to believe it. A four-time Central Connecticut Conference selection, she finished her high school career with 1,281 points.

Williams was recruited by BU during her high school junior year. She accepted, but just months before she was to start, there was an abrupt change in the coaching staff with the resignation of head coach Kelly Greenberg.

“I was a little taken back, but I never called any other school,” Williams says. “I was in it for the long haul regardless.”

Her BU career began with a 3-3 record, but the season quickly went downhill—the Terriers went 2-for-25 the rest of the way. Off the floor, Williams struggled to adjust to college, to balance academics and athletics. The routine became onerous: “Wake up, go to class, practice, lift, do homework, and go to bed,” she says. “It was that same thing every single day.”

Midway through freshmen year, she seriously considered leaving the team. But with Steding’s encouragement, she hung in there despite a sophomore season that saw the Terriers lose their first 15 games and finish with a 3-27 record.

“Coming into sophomore year, it was kind of a continuation of how we ended the first year,” Williams says. “It was a rough time in general. Rough time.”

Over the past two years, the team’s fortunes have improved significantly. The Terriers finished last season with a 13-17 record and earned their first Patriot League tournament appearance under Steding. And despite beginning this season with a 5-5 nonconference record, they are 10-16 with just two games left in the regular season, a slight regression from last year.

Players call their captain the glue of the team, and they credit much of the past two years’ turnaround to her. “She’s just a great person to model yourself after, not just on the court, but off the court,” Pressley says.

For her part, Williams says she’s grateful to former captains like Courtney Latham (Questrom’17) for their example, which provided much needed perspective as the team battled during her first two seasons. “This season, when we hit a lull and had a six-game losing streak, we knew we had been in a worse scenario before,” she says. “We have had to fight through much worse games than that. You get stronger from going through those struggles.”

Williams has not only found her voice on the court, but balance off the court as well. As both a sophomore and junior, she was named to the Patriot League Academic Honor Roll.

And as she begins contemplating life after BU, she says she plans to pursue a career in college athletics communications.

Both the coaching staff and next season’s returning players are already trying to imagine the program without her. “I don’t know what college basketball is without her,” Thompson says. “That’s gonna be wild.”

“Even thinking about not having her around, I’m like, phew, that’s a big pair of shoes to fill,” Steding says. “It’s going be a steep learning curve for whoever has to come behind her, because they’re going to realize how much Corrine did. We’re going to miss her a lot.”

The BU women’s basketball team takes on Army tomorrow, Saturday, February 24, at 2 pm, at Case Gym, 285 Babcock St. Tickets are $8 for the general public, $5 for faculty, staff, and students without a sports pass, and free for students with a sports pass. The Patriot League Network will broadcast the game live.

The Glue That Holds the Women’s Basketball Terriers Together