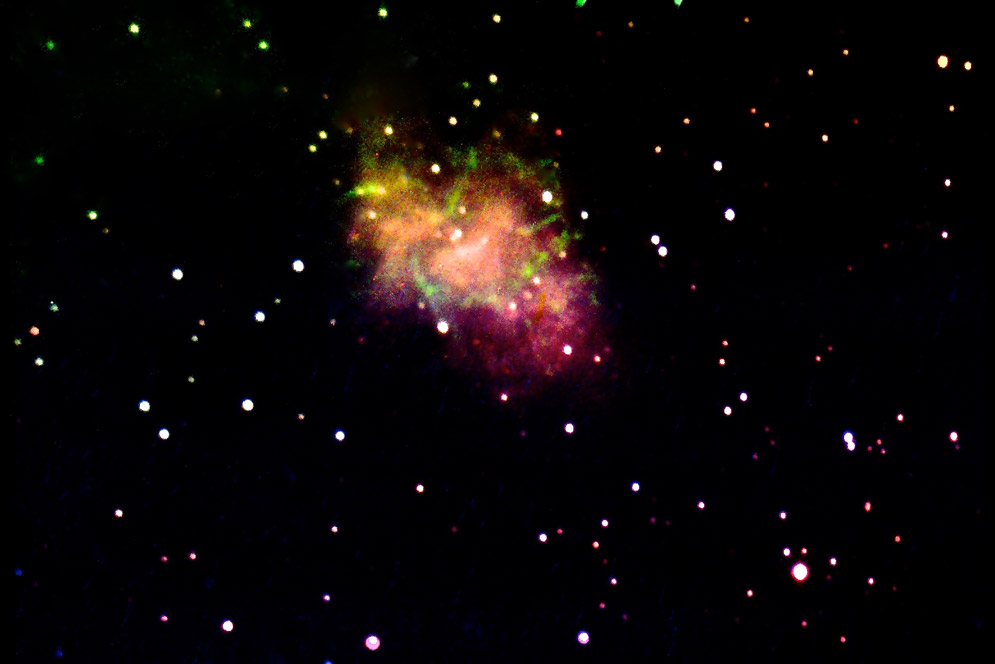 A BU Astronomical Society photo of Messier 1 taken with the 14-inch telescope on the CAS roof. Also known as the “Crab Nebula,” M1 is a supernova remnant in the constellation of Taurus. Photo courtesy of BUAS

Searching for a place to discuss the latest space news, take photos of distant astronomical objects, watch episodes of Star Trek and Cosmos, or engage in the occasional lightsaber duel? The BU Astronomical Society (BUAS) is the club you’re looking for.

Comprising a small but dedicated group of space-loving students, the club, which is affiliated with the College of Arts & Sciences astronomy department, meets every Wednesday from 6:30 to 7:30 pm in CAS 502 (the room is tricky to find so directions are here). Club secretary Alina Chenausky (ENG’19) begins meetings by passing around a sign-in sheet: members sign in and answer the “question of the week.” These range from serious (“What’s your favorite astronomy-related equation?”) to light (“Jedi or Sith?”). President Zach Orent (CAS’18) then reviews recent space news.

Meetings orbit (pun intended) around a main activity or theme. One week, members heatedly debated who was the “best astronomer.” They whittled an initial list of eight of the field’s brightest down to Stephen Hawking (the physicist and cosmologist who predicted the existence of black holes) versus Carl Sagan (an astronomer best known for his work in science popularization). The spirited arguments lasted about half an hour—with a brief tangent on the ethics of marijuana (Sagan was a longtime casual user of cannabis and a strong advocate for its legalization). Ultimately, Orent (careful to say the decision didn’t necessarily reflect his opinion) declared Team Hawking the winner.

Another recent meeting saw members playing a few rounds of “What in the Universe Am I?” a 20 Questions–like game with a spacey twist. Club vice president John Hunter (CAS’19) projected a photo of an astronomy-related object on a screen, among the ones that night: James Webb Space Telescope, the Orion Nebula, and Martian volcano Olympus Mons. They took turns sitting with their backs to the photos, asking questions to guess the object: “Am I man-made?” “Am I in this solar system?” “Am I bigger than a galaxy?” “Do I orbit the sun?”

Among other activities: guest lectures, undergraduate and graduate astronomy research presentations, trips to Boston’s Museum of Science, and stargazing excursions. Last year, students drove to one member’s home in western Massachusetts so they could look up into clear skies, away from city light pollution. This fall they hope to do a camping trip that will include telescopes.

For many members, though, observing and astrophotography are their favorite activities. On clear Friday and Saturday nights, they use the 14-inch telescope on the CAS roof to look at astronomical objects and take pictures. The telescope is mostly operated from a computer lab on the sixth floor.

On those nights, BUAS members will look up at objects of interest in the Boston sky, point the telescope towards each, and take photographs. When they capture a good image, they upload it to their website and add it to their ever-growing “Catalog of the Cosmos.” The club launched the catalog project three years ago; their goal is to “image the best that the Boston sky has to offer.”

BUAS also participates in science outreach. Last semester, club members teamed up with School of Education students to give astronomy demonstrations for middle school students. And earlier this month, they volunteered at the annual SET (Science, Engineering, Technology) in the City, an annual career exploration day for high school girls run by the Boston Area Girls STEM Collaborative.

There are no prerequisites or qualifications for joining the club. Members are undergrad and grad students from several BU colleges. What unites everybody is a common fascination with outer space.

Adela Patru (CAS’21), a freshman studying biochemistry and molecular biology, says one of the things she likes about the club is that it doesn’t require members to know all the nitty-gritty details of a particular subject, unlike some of the other academic clubs on campus. “It’s less pressure in that respect,” she says.

Astronomy and physics major David Gomez (CAS’19) also values the club’s  balance between laid-back fun and hard science. “We get to talk about a lot of cool stuff, but we also get to not worry so much about all the specifics,” he says. “We touch a lot of the specifics, but it’s not super-crazy in-depth.”

BUAS even has an exoplanet (a planet outside of our solar system) named after it—albeit unofficially. “We were sifting through exoplanet data from Kepler”—NASA’s Kepler mission looks for planets around other stars, and like all NASA missions, its data are publicly available online—“and we found one and we named it BUAS,” Hunter says.