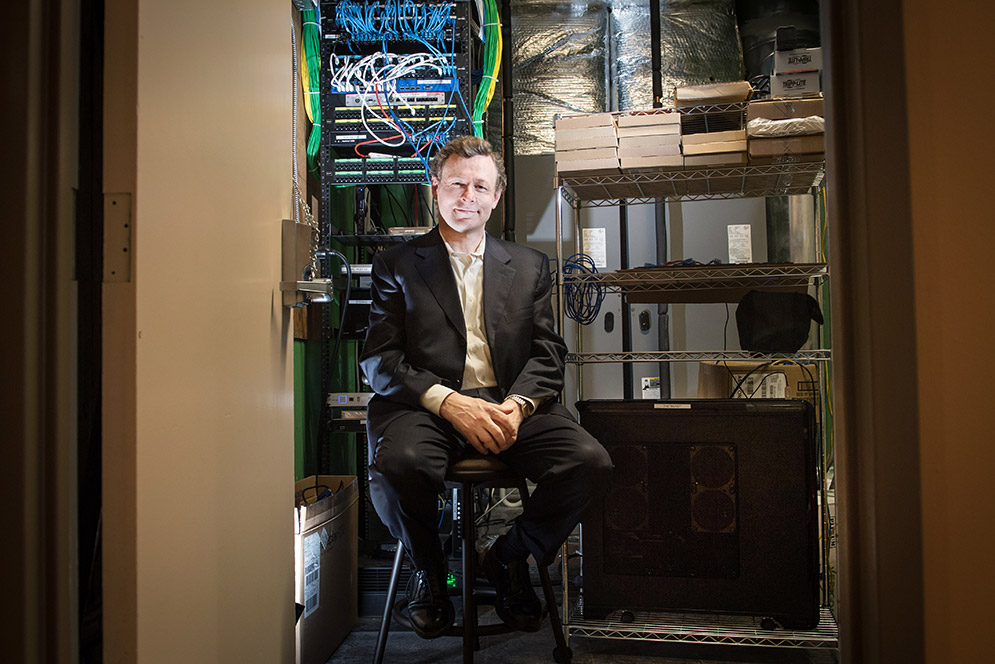 “I don’t even like computers,” Connor Wood confesses. So why is this postdoctoral fellow in religion studies so enthusiastic about the computer simulation displayed on his laptop, resembling the result of an explosion at a spaghetti factory and an adjacent paint store—a tangle of curved, intersecting, multicolored lines?

Because those lines represent the new frontier of computer-simulated religion studies being explored by Wood (GRS’16) and other researchers under Wesley Wildman, a School of Theology professor of philosophy, theology, and ethics. The answers they seek might help explain things from religion’s benefits (potentially better mental health) to its evils (violence in the name of God).

In the field of religion studies, Wildman says, he became an early adopter of computer simulation after a working lifetime had taught him that “social dynamics like religion are complex…and that makes them difficult to understand.” Beholding breakthroughs in other fields made possible by computers, it struck him that “virtual social worlds” could help religion scholars tackle previously unanswerable questions.

Case in point: the lines on Wood’s laptop, a computer simulation predicting answers to the question: Why do regular practitioners of religion seem to do better, mental health–wise, than the nonobservant? (They have slightly lower suicide rates, for instance, Wood says.) One theory holds that religions requiring disciplines like fasting or regular prayer build behavioral self-regulation in their members. Using a computer at Virginia’s Old Dominion University, where the BU researchers have collaborators, Wood made the simulation, which predicts how many people would stay in a religion based on its strictness.

He compared that to real-world data about defection rates from 18 Christian denominations, ranging from those with strict obligations like the Mormons (a fast-growing faith) to the more permissive United Church of Christ, which has shrunk from two million members in the 1950s to less than a million today. The computer model “corroborated and predicted that people’s subjective well-being and self-control would rise in a growing community” with rigorous rituals, Wood says.

They can do such simulations now in the comfort of Wildman’s STH office, where they’ve parked “the Beast,” as they’ve dubbed the $55,000 computer they had custom-built for their research. Resembling a black extra-large suitcase, the Beast’s capabilities match the scholars’ needs, Wildman says: “The particular models we’re using involve computer agents, the religious subjects being studied, with virtual minds.…To get religious cognition expressed in the computer model, you’re going to need a lot of memory.”

Money for the Beast came out of a $2.4 million grant, most of it from the John Templeton Foundation, to use computer modeling and simulation to test heretofore untestable hypotheses about religion. Now halfway through that three-year grant, Wildman is also a coresearcher in the early stages of another grant, of $2 million, from the Norwegian government’s Research Council. Norway is concerned about immigrants, mainly Muslim, who don’t assimilate, he says. “The grant’s challenge to us is to figure out…the process of integration and refugee flow and the risks of religious extremist violence.”

“This is a potential explanatory tool for understanding why people get radicalized, why religious violence is increasing, why we’re seeing culture wars about religion in our political discourse.”—Connor Wood

Wood is using the Beast to research a separate question that nevertheless may have bearing on Norway’s problem. Religion confers structure and hierarchical roles on life, he says, from tribal initiation rites to bar mitzvahs to weddings. He wondered whether such structure builds resilience in ways that unstructured societies—including secularized ones—don’t. The Beast simulated a group of individuals that it depicted by wave patterns onscreen; when Wood tells the computer to eliminate structures and hierarchy, the waves jump apart chaotically, a computerized depiction of nonresilience.

“This is a potential explanatory tool for understanding why people get radicalized, why religious violence is increasing, why we’re seeing culture wars about religion in our political discourse,” he says. While an un-hierarchical society might feel more equal, many people seek structure, he says, and violent religious groups are nothing if not structured according to a rigid insiders-vs.-outsiders outlook. To test the accuracy of the computer’s prediction, Wood will use a variety of real-life data, including how adolescent social networks work and how emotions can spread like contagious diseases among online communities.

Wildman’s research team has used the Beast to analyze people’s reactions to terrifying events such as natural disasters or disease outbreaks. The frightened often flood churches to “cope with death-salient events,” Wildman notes. A philosopher like himself, operating without simulation tools, “could sit down and say, it makes sense to me that people would react to this terrifying event by seeking supernatural agent help; they’d probably start going to church or temple more.…I could write a book about that, and it’d be the theoretical story behind my hypothesis.

“But it’s just a hypothesis. It really needs to be tested,” he says. Using the Beast, the team created a computer-simulated virtual human mind capable of simulating the impacts of terror on behavior. The model, in turn, suggests that religious ritual observance would spike after terror-inspiring events drove people beyond a certain threshold of fear. The simulated output will be tested against what sociologists and demographers have learned about spikes in religious observance following a frightening event, such as the 2011 New Zealand earthquake that killed 185.

“And that,” Wildman says, “makes for a less speculative and more interesting book.”

Besides predicting contemporary realities, he says he plans to turn his computer modeling toward the past, studying religion’s role in such epic developments as humans’ transition from hunting and gathering to agriculture.

The Beast requires the researchers to articulate as precisely as possible the hypotheses they hope to model. “Computers are dumb,” Wood says. “They’re not conscious, no matter what Silicon Valley says….They can’t do context, they can’t get a facial expression, they can’t make a leap to understand what you’re saying.” That may explain what Wildman calls the aversion in the humanities to the kind of abstraction that computers permit. But while fieldwork is priceless, he says, modeling stretches the realm of academic theorizing.

“You’ve got a big, complicated system in the real world; you try and approach it from the top, from sociology, you can only get so far,” he says. “You approach it from the bottom, from psychology and neuroscience; you can only get so far.…How do you get to the actual system dynamics? The thing to do is to simulate the complicated social system in a computer so that you can slowly study it.”

What Computer Modeling Can Tell Us about Religion

What Computer Modeling Can Tell Us about Religion
7
share this