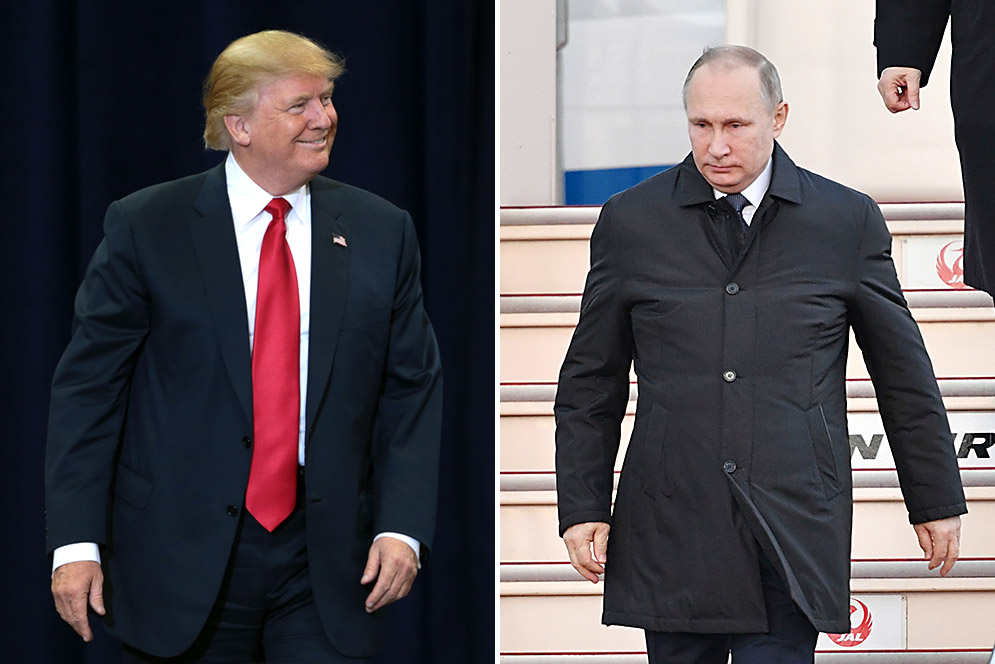 President Donald Trump has been criticized for his rosy assessment of Russian President Vladimir Putin, but his administration’s contacts with that nation have been problematic so far. Trump photo by Flickr contributor Gage Skidmore; Putin photo by the Yomiuri Shimbun via AP Images

And Loftis would have seen it, if it had happened in the past few decades. He served in the State Department and the Foreign Service from 1980 to 2012, through the administrations of Jimmy Carter, Ronald Reagan, both George Bushes, Bill Clinton, and Barack Obama. He has worked all over the globe in a wide variety of assignments, including acting coordinator for reconstruction and stabilization (2010-2012), special representative for avian and pandemic influenza (2009), senior adviser for security negotiations and agreements (2004-2007), and ambassador to Lesotho (2001-2004). Ask him about his encounters with Russians diplomats and military men over the years, and he’s got stories from Switzerland, New Zealand, and Mozambique.

BU Today talked with Loftis in his Bay State Road office about Trump’s approach to Russia and the impact it could have.

BU Today: There’s so much going on with Trump and Russia, it’s hard to know where to begin. What do you suggest?

Loftis: The inclination to have a better relationship with Russia is not a bad thing in and of itself. If you remember when Obama came in and Hillary Clinton was secretary of state, they talked about a reset of relations. But there are things that Russia has been doing for the last eight years that made that reset impossible, and made our close longtime allies extraordinarily nervous. And without laying out what he wants from that relationship with Russia, Trump is leaving everybody very much up in the air.

In the last week or two, Russian jets have done flybys on US ships, we have a Russian spy ship sitting off Connecticut…

A lot of this is normal game-playing. The press is making a big deal of these flybys, but these have been going on for a long time. They have pushed the envelope a little bit, but that often happens in the early days of a new administration, to see how we’re going to respond. You test the new guy.

But a lot of what’s happening isn’t normal, is it?

First of all, Trump as a candidate calls on the Russians to hack Hillary Clinton’s campaign. Now you’ve got Flynn. Where Flynn apparently crossed the line was talking very specific policy, and in a way at odds with the then-current administration’s policy. And then he lied about it, or misled Vice President Pence. And then you also have members of the campaign apparently talking to Russian intelligence operatives. Put all that together and it brings a lot more attention to what would normally be there.

There’s also the question of whether Putin has some kind of hold on Trump himself, a suspicion that persists despite denials.

The whole sex scandal stuff, to me it’s all smoke and mirrors, I seriously doubt there’s anything to that. But I am one of the people who think it would be very helpful if Trump would release his tax returns so we could see if he has business ties to Russia. To my mind that’s one of the real unhealthy things, this lingering suspicion that somehow Vladimir Putin has an in on our president. Not healthy. At all.

Trump says it’s good to have better relations with Russia.

Do we want to throw over 60 years of incredibly valued relationships with our European and East Asian allies for the promise of some sort of better relationship with an authoritarian regime in Russia, where the president shuts down every form of opposition? A country that is deliberately going in and destabilizing its neighbors, is that the country we want to say is our number one partner in the world? I don’t think so.

What could we gain from closer ties?

There is something to be gained if we can help modify their behavior. If a better relationship means that they stop messing around in Ukraine and stop their provocative actions in the Baltics and stop shoring up oppressive and abhorrent regimes like Assad in Syria.

I haven’t seen it. People think diplomacy is about getting along with people, and it’s not. Diplomacy is about getting other countries to do what you want them to do. The point of having a better relationship with Russia, or any other country, is not to have a better relationship with Russia. It’s to have a relationship that persuades them to act in ways where our interest is congruent. So far there’s not a lot of evidence that we are getting a lot in return.

What does Putin want from Trump?

You can’t reconstitute the Soviet Union, but Putin definitely wants to re-create Russia as a great power. Part of his calculation appears to be that the way to make Russia a great power is to make others weaker. Russian history suggests that they are incredibly insecure—and there are reasons why, they’ve been invaded an awful lot—but the problem is that Russian insecurity translates into bad news for all of its neighbors. Keeping the West weak is to their advantage.

Some US career diplomats seem to be jumping ship, while others are staying on. What is their calculation?

In general, how paranoid should people be about Trump and Russia?

People should be slightly paranoid. This is going to sound really trite, but the powers of democracy, the checks and balances that we have in this country, eventually work. This is a slow-moving ship; it takes time. But the press is not lying down, you see the demonstrations going on, you see people within Trump’s own party fighting against things he is going to do. The president has a tremendous amount of power, but he will be questioned often and loudly. That’s not going away.

US-Russian Relations Under the Microscope

There are 6 comments on US-Russian Relations Under the Microscope