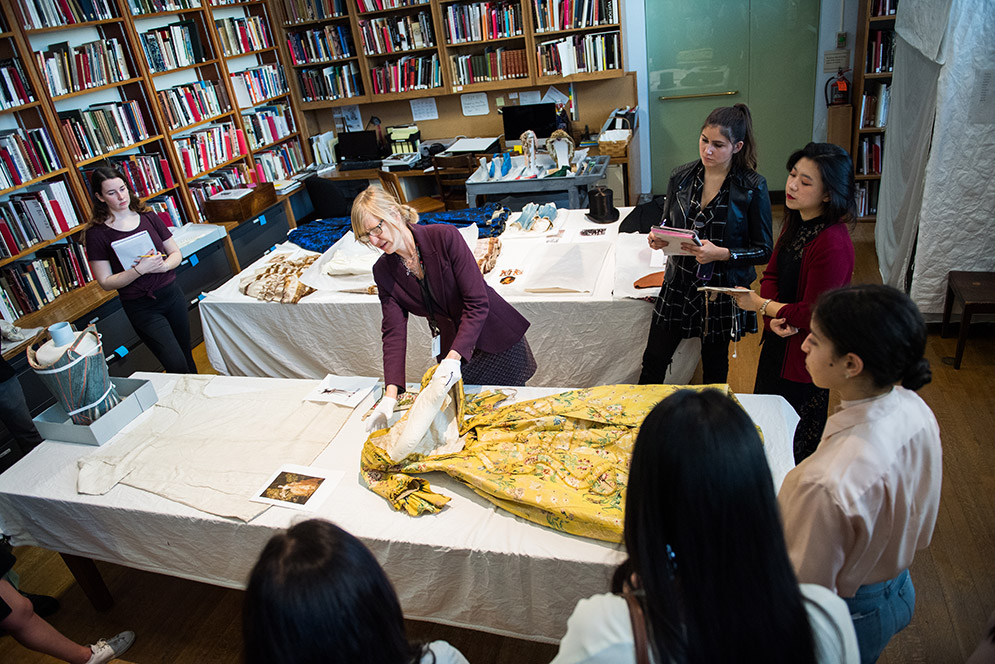 On a warm early spring afternoon, students in Arianne Chernock’s Fashion as History course are gathered on the stone steps of the Museum of Fine Arts, soaking up a few minutes of sunshine before being ushered into the museum’s cool, dark lobby to meet Lauren Whitley, the MFA’s senior curator of textile and fashion arts. There, they will get a behind-the-scenes look at the fashion archives.

Chernock, a College of Arts & Sciences associate professor of history, hopes the new course, offered through the history department and the Women’s, Gender & Sexuality Studies Program, shows students that fashion is far from trivial. Rather, she says “it offers insights into political processes, class and gender relations, imperial dynamics, and economic circuits. Fashion, for example, helped to distinguish the sexes, and it played a colluding role in the development and expansion of empires. Perhaps even more importantly, it has played a role in making history.”

Her inspiration for the class came during a visit to the Victoria and Albert Museum when she was on sabbatical in London. As she was taking in the institution’s vast collection of clothing and textiles, passing by the intricate gowns, corsets, and more on display, she says, “I thought about how great it would be to literally fashion a course around those objects.” The course’s unique fashion lens has drawn students from many different majors, she says.

The MFA trip is one of two excursions (the other takes students to the Shoes: Pleasure and Pain exhibition at the Peabody Essex Museum in Salem, Mass.) that Chernock has organized to help students prepare for a final research paper about a particular item of clothing, footwear, or accessory from the collections that they must put in a historical context. The visits are also part of the history department’s larger effort to take advantage of, and build partnerships with, institutions around the Boston area.

Inside the museum, Whitley leads the class to the textiles and fashion arts study room, where scholars can study the almost 55,000-object textile collection. Although the course curriculum is thematic (and global) rather than chronological, she has focused on items from the 18th and 19th centuries, a period covered in much of the literature the students have read prior to the visit.

Clothing, shoes, and accessories are on display around the book-lined room, on tables and on mannequins. The first item Whitley discusses is a gold brocaded silk dress from mid-18th-century England. The dress, with an elaborate floral pattern and lace details, is known to have been worn by Lydia Catherine, Duchess of Chandos. “This is expensive stuff,” Whitley tells the group in a discussion on fashion’s implications on class in history. “Silk in the 18th century was incredibly valuable, and because of that, clothing was often updated a little later. You updated it and got as much life out of it as you could.”

Starting with the lowest layer, she displays the many other components of the outfit: the slip, the chemise, the corset, and the pannier, or hoop skirt. The intricate, multilayered outfit engenders a question: how heavy would it be?

Quite heavy, Whitley says. “But, more than the weight, it’s just the accumulation of stuff. You’ve also got stockings, garters, buckled shoes. And there’s this very firm, rigid corset holding you in, setting your shoulders pretty far back. You’re kind of stuck in that position.”

Next, the class turns to corsets—the first, from about 1750, is cone-shaped, made of intricate silk, and stiffened and fortified with whalebone. The next, from about 1870, has an hourglass shape (the fashionable figure at the time) and is fortified with strong but lightweight steel, just becoming mass-produced in this Industrial Revolution era.

“It’s interesting to look at England in the 19th century, as opposed to France in the 18th century, because England is where the Industrial Revolution really accelerates and takes off,” Whitley tells the students. “And people look at this era and think, Victorian—backwards, conservative—but it was the era of technological advancement. You had the flying shuttle, you had spinning machines, you had the steam engine, you had railroads, you had the perfecting of the steel technique, you had the perfecting of coal as a source. These were huge. We’re not the same world we are today without those things having happened.”

Whitley shows some of the MFA’s many extraordinary examples of French Revolutionary clothing to the class as examples of fashion’s role in class conflicts. The students lean in as she delicately takes out a faded wool bonnet rouge, or Phrygian cap, that would have been worn by working-class people, the sansculottes (literally, “without breeches”). The students had just finished a unit on fashion and revolution, which included Revolutionary dress in France. The bonnet rouges “were already based somewhat on working-class men’s knitted caps,” Whitley tells them. “But they actually became melded with the notion of these Phrygian caps, which are an ancient form. In ancient Rome, if you freed your slave, then you’d shave their head and give them a cap.”

“Seeing the Phrygian cap in person—the faded colors, the texture and shape—really made me understand that someone quite literally lived in that cap,” says Martin Yim (CAS’17). “The cap was, in part, a reflection of that person who used to exist. That person’s politics, lifestyle, and taste… It was a very tangible moment and helped me appreciate that fashion really can be an informative lens for historical inquiry.”

Chernock’s other units for the semester—including Fashion, Race, and Social Resistance and Fashion as Industry—incorporate lessons ranging from the zoot suit riots to fast fashion’s implications for the environment. Because of her students’ enthusiasm, she plans to offer the class again next spring.

The museum visit “was such a special experience,” says Alexandra Machado (COM’17). “Because of this class, I think I will pay more attention to what you can learn about the cultures and times fashion represents. This is probably one of the best classes I have ever taken at BU.”

One Class, One Day: Threading History

There is 1 comment on One Class, One Day: Threading History