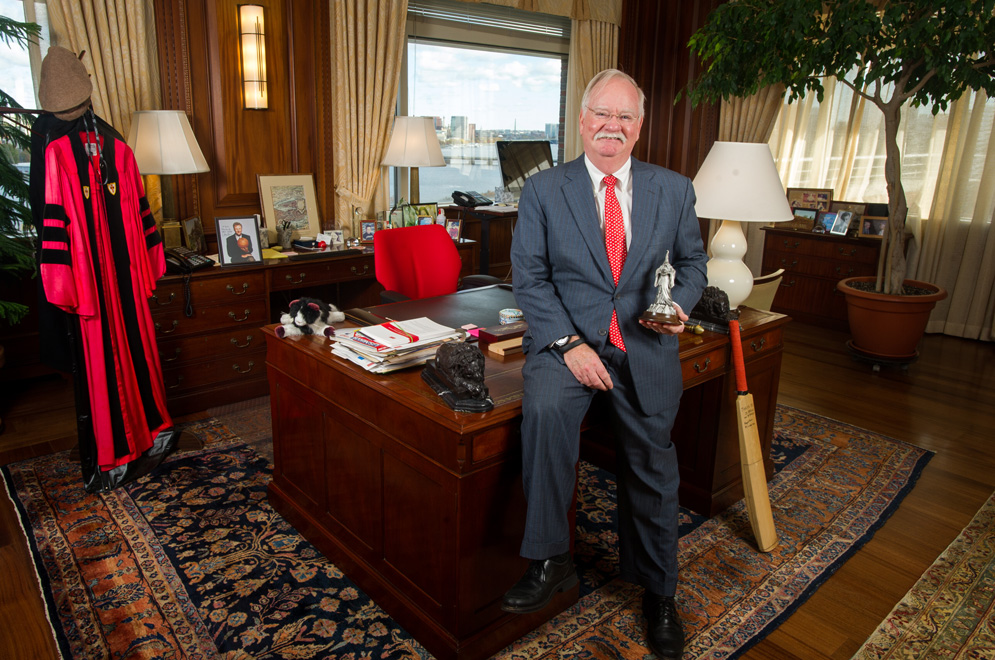 Click on the circles above to see more of what Robert A. Brown displays in his Silber Way office.

Visitors to BU President Robert A. Brown’s oak-paneled office, on the eighth floor of One Silber Way, are probably most impressed by the view. Large wraparound windows look out on the Zakim Bridge, the Kenmore Square Citgo sign, the Charles River, and beyond. Inside, there are also some interesting things to see: Oriental rugs, a seven-foot tree perched in the corner, and some pretty quirky stuff that he’s collected over his 38-year career in academia.

The artifacts include signed photos of sports legends, trinkets from grateful students and employees, and perhaps most meaningful, memorabilia from his kids.

Sitting on the president’s imposing desk is a four-inch statue of the wizard Merlin peering into a crystal ball, a Christmas gift from his two sons, then ages 16 and 14. They gave Brown the statue when he became provost of MIT in 1998 (a job he held until 2005, when he became president of BU), “because they said that’s what they thought the job was,” he says. “You end up making a lot of decisions, and I think a lot of people think a lot of the decisions are mystical.”

“People always ask me what higher education will be like in 20 or 30 years,” says Brown, a history buff. “You really are looking into a crystal ball just to understand what society will look like… You can go back 50 years ago and see people asking the same question, thinking that higher education would change for the same reasons they think about it changing today, and it really hasn’t changed that much. It really is about how people value education and how they think about that value. When people ask questions like that, it’s a metaphor for looking around the corner.”

In our series “Office Artifacts,” BU Today highlights interesting artifacts professors display in their office. Have a suggestion about someone we should profile? Email amlaskow@bu.edu.

There are 5 comments on Office Artifacts: Robert A. Brown