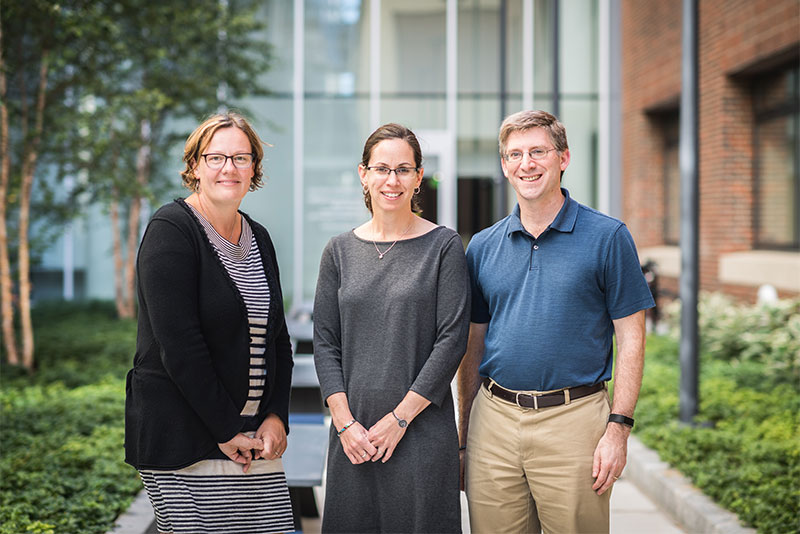 More than half the world’s population lives in cities, which are increasingly vulnerable to air and water pollution, storm surges, heat waves, and other extreme weather. Urban areas consume 67 percent of global energy and emit 71 percent of the world’s carbon dioxide. In Boston, and cities across the country, growing traffic congestion increases emissions of pollutants that can raise rates of cardiovascular and respiratory illness. In short, cities are a very good place to start solving the planet’s environmental and climate change problems.

Pamela Templer, a professor of biology at the Boston University College of Arts & Sciences (CAS), and a team of interdisciplinary researchers from CAS and the BU School of Public Health (SPH) are aiming a broad-based new teaching program at exactly that. The researchers have been awarded a $3 million, five-year National Science Foundation Research Traineeship (NRT) grant to prepare a new generation of interdisciplinary scientists to tackle urgent urban environmental problems through what is hoped will be a model graduate program for other universities.

Templer, who is principal investigator on the grant, and her colleagues will train 60 graduate students in the CAS biogeoscience and SPH environmental health PhD programs with the technical knowledge, policy know-how, and communications skills needed to help cities address multidimensional problems at the intersection of the environment and public health.

“It’s very important that our students understand how to do basic science and publish their results in scientific journals,” says Templer, “but we also want to train them to ask scientific questions that will produce information that policy makers can use, so they can make a difference.”

Started by a group of CAS faculty in 2009, the biogeoscience program draws students primarily from the departments of biology and Earth and environment, as well as from the archaeology program. Biogeoscience is the study of interactions among the Earth’s atmosphere, biosphere, hydrosphere, and geosphere. It includes research into how land cover, rising temperatures, and fossil-fuel emissions affect water and air quality. Templer and her colleagues believe theirs is the first graduate program to combine training in biogeoscience and environmental health.

“Graduates will be equipped to address foundational questions about the physical environment and to reduce the impacts of the environment on both ecosystem function and human health,” says Templer, who will direct the NRT program.

The BU program, Boston UniverCity: Partnering Graduate Students and Cities to Tackle Urban Environmental Challenges, was one of 17 projects sharing a total of $51 million in NRT grants to develop transformative models for interdisciplinary graduate education in science, technology, engineering, and mathematics (STEM) fields. All of the projects are aimed at training students to address complex problems at the intersection of different scientific disciplines.

Lucy Hutyra, an associate professor of Earth and environment, and Jonathan Levy, an SPH professor of environmental health, are co-principal investigators on BU’s grant and will serve as associate directors of the Boston UniverCity program.

“This program is building and institutionalizing a commitment of scientists as civic actors,” says Hutyra. “We have an opportunity, and arguably a responsibility, to take our basic science to the streets to solve the real-world problems of our community—and all of our communities. This grant creates a mechanism to do that.”

Hutyra and her colleagues believe that federal actions to relax environmental protections give programs like Boston UniverCity an even greater urgency.

“It’s the cities that are developing aggressive climate action plans,” says Levy, “and it’s well timed to have students who know how to actually engage with cities—to know who to engage with, where they can intervene in the process. We’re hoping these students can tackle the big problems relating to air, water, and climate that cities in the 21st century are facing.”

The program will connect students with city officials in Boston and other towns in the metropolitan area, and with private corporations and NGOs, so they can work on team-based collaborative projects that may shape environmental and land-use policies. Templer, Hutyra, and Levy, and other CAS and SPH faculty, already work with officials in Boston and other towns, and Carl Spector, Boston’s commissioner of the environment, is a member of Boston UniverCity’s external advisory council.

As part of its role in the new program, BU’s Initiative on Cities (IOC) will help connect students to government agencies that have expressed an eagerness to work with the University’s researchers on everything from reducing traffic congestion to planting trees to mitigate air pollution.

“The folks doing this important work on the city side often don’t have PhDs or deep scientific knowledge, so there is tremendous need for more direct involvement by the scientific community to help them measure and collect data and take action,” says Katharine Lusk, IOC founding executive director. “The hope is that we can build a model here that can be applied in other cities and universities, so that students can more directly engage in the really sophisticated research that needs to be happening at the intersection of the urban environment and health.”

Because modeling and data analytics will be an important part of the training, the core faculty includes Eric Kolaczyk, a CAS professor of mathematics and statistics, as well as Mark Friedl and Nathan Phillips, both CAS professors of Earth and environment, and Patrick Kinney, an SPH professor of environmental health and the Beverly Brown Professor of Urban Health.

The Boston UniverCity program builds on the hands-on research that Templer, Hutyra, Levy, and other CAS and SPH faculty have been conducting with graduate students to help Boston city officials address everything from methane gas leaks to traffic congestion. In one such project, Hutyra and PhD student Conor Gately (GRS’16) used mobile phone and GPS data collected by the Boston Metropolitan Planning Organization to figure out how fast vehicles were moving and used the speed to model air pollution and emissions from traffic, block by block.

“That was a fascinating scientific problem to undertake, but it’s fantastically applied as well because the city can use that information to identify key areas for policy interventions to make a difference in air quality,” says Hutyra.

As part of his work on the project, Gately, who is now a postdoctoral research scientist dividing his time between CAS and Harvard University’s department of earth and planetary sciences, “got a desk in the Metropolitan planning office and worked side by side with the staff,” says Hutyra. “He’s a perfect example of what the NRT is trying to do, which is to integrate students with government agencies and policy makers to design research problems of the highest social relevance and produce precisely the data they need to inform solutions.”