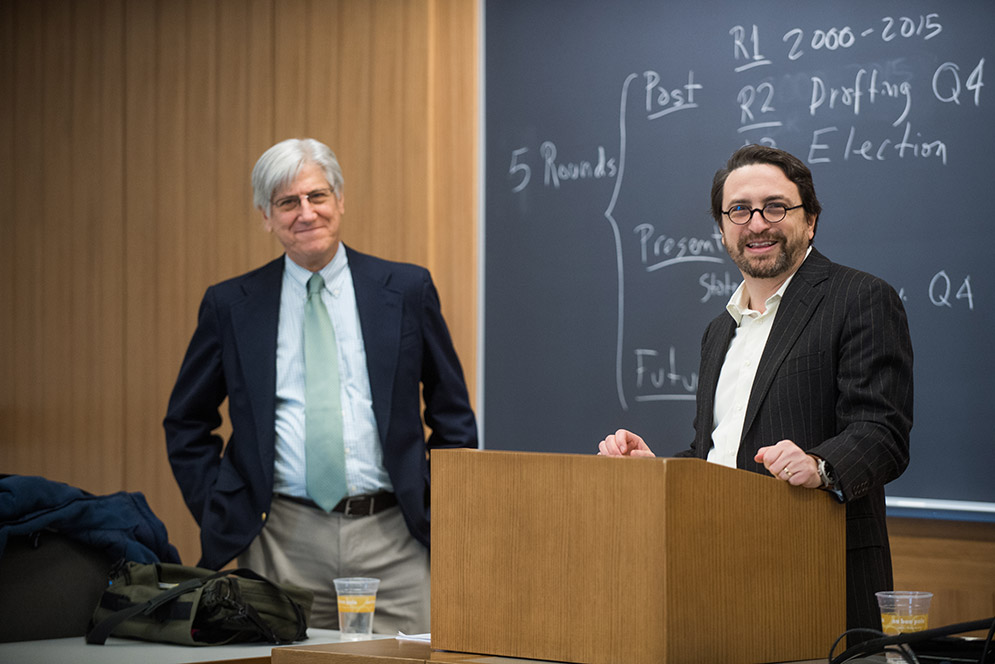 Popular books on legalizing marijuana frequently have fun titles, Jay Wexler says. From Weed the People to Brave New Weed, the School of Law professor waded through many such potboilers (sorry) to prepare his new course, Law and Regulation of Cannabis.

The syllabus, however, forgoes the catchy titles for more scholarly texts and discussion. Coming just months after Massachusetts voters legalized recreational marijuana, the class introduces future lawyers to the tectonic shifts in states that have legalized the drug, and how those laws bump up against the as-yet-immovable rock of federal prohibition. Since drug law is not Wexler’s specialty (that being church-state matters), he boned up on the topic before launching the class and brings in guest experts to lecture.

Among them is Michael Cutler (LAW’73), a defense lawyer and member of the National Organization for the Reform of Marijuana Laws, who helped draft Question 4, the pot-permitting Massachusetts initiative approved last November. Any among the 18 students in the class who feared a dry legal disquisition need not have worried: Cutler offered a two-hour report from the marijuana wars front that was both humorous and opinionated.

He described how Question 4 lawyers drafted a “best practices” law based on successful initiatives elsewhere. Then, as he gave talks in support of the ballot initiative in the months leading up to the election, how he relied particularly on parents in his audience, who worried about their kids abusing pot under what was then the current illegalization regimen. Such people, he said, would be more likely to see the advantages of legalization-cum-regulation (the law bans marijuana use for those 21 and under).

“Every parent knows…you have much easier access to unregulated marijuana than you have to regulated alcohol,” Cutler said.

He shared his view that demographics—younger Americans are legalization’s most ardent supporters—will be destiny. “The prohibition supporters are dying,” he said, his bluntness getting laughs. “The future of marijuana law does not lie with courts. It lies with voters.…The change, I think, is unstoppable.” For those soon-to-be-deceased prohibitionists, the class also considers arguments for keeping marijuana illegal, according to Wexler. One guest speaker runs the medical marijuana program in Massachusetts, whose governor, Charlie Baker, opposed Question 4 because of concerns that children might gain access to pot, the initiative’s restrictions notwithstanding.

Cutler also served up what he calls the slam-dunk arguments for legalization: prohibition’s underlying racism and the harms it sows, such as gangs who profit off illicit marijuana.

Every American drug prohibition, including that on marijuana, “was adopted with explicit racial animus,” he told the class. “It’s not about safety. It’s not about health.” (Wexler agrees. “The origin of marijuana laws is racist,” he said later in an interview. Federal officials used antiminorities rhetoric when they criminalized pot in the early 20th century. Today, the rate of marijuana use by African Americans mirrors its use by whites, but the arrest rate of African Americans for possession is four times greater.)

Wexler wants students to come away understanding more about “this bizarre situation where…you have this gigantic, burgeoning industry at the state level, and it’s completely dependent on the feds not enforcing federal law” that says pot is illegal.

Wexler said most banks won’t do business with the weed industry, because “they could be prosecuted for money laundering and all sorts of federal crimes. Now, the federal government says they’re not going to prosecute you, but they could change their mind tomorrow.” He recalled Attorney General Jeff Sessions’ 1980s comment that “he thought the Ku Klux Klan were good guys until he learned that they smoked marijuana.” (Sessions has said he was joking, but that comment and others led the Senate to reject him for a federal judgeship in 1986.)

The Trump administration’s attitude toward legalization remains an open question to those in the marijuana industry. BU and other universities that receive federal money continue to prohibit the use, possession, cultivation, or distribution of marijuana on campus, regardless of Massachusetts law.

The genesis of Wexler’s class occurred a year ago, when a case book publisher working on a marijuana law book asked him if any LAW professor might want to teach the topic. “I said yeah, I’d be interested,” he recalled, noting that he found similar enthusiasm among his deans.

Dana Dobbins (LAW’18) took the class in advance of a job this summer at a Denver law firm (marijuana has been legal in Colorado since 2014). “It’s an interesting time to study this area of law, because there is so much change,” she said. Three other states besides Massachusetts passed marijuana legalization last fall, while another four approved it for medical use.

The class has been interesting for the differing rationales students have for supporting legalization, Dobbins said. People she differs with politically “want marijuana deregulated because it’s a federalism issue, right? They want states’ rights asserted, whereas…I think that criminalization oppresses minorities unfairly.

“There’s nothing quite like marijuana policy out there,” she said, “because legalization is so new.…It could be a huge area of law.”

The Brave New World of Legalized Marijuana
One Class, One Day
4
share this