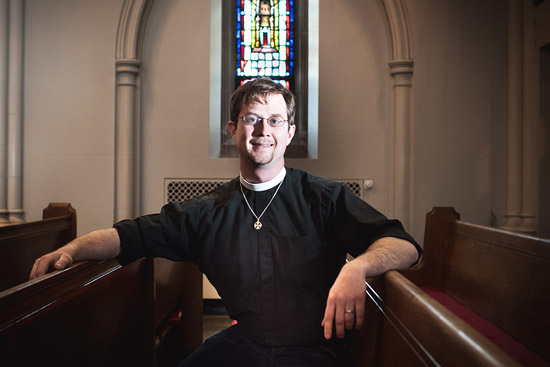 The 1,800-plus marriage licenses filed in Boston between last November and March spiked by one-fifth over the same period one year before. While the city doesn’t record how many of those involved non-citizens, the Boston Globe reports the number for immigrants marrying American citizens—thereby becoming eligible for a green card, which confers permanent residency status and relieves immigrants of anxiety about possible deportation or blocked return if they venture outside the US—increased after Donald Trump’s election, and particularly after his January inauguration and his efforts to impose a travel ban against several Muslim-majority countries.

None of which was news to Brother Larry Whitney (STH’09,’18), University chaplain for community life at Marsh Chapel. He has not only married four couples with American and immigrant partners at no charge since Trump won the presidency, he’s offered via Facebook to officiate at more such nuptials gratis.

“I feel that there’s a moral imperative to use my status as a legal officiate of weddings to help people who feel that they are living under a threat,” says Whitney, a member of the Ithaca, N.Y.–based Lindisfarne Community, an ecumenical religious order.

He performed one of the weddings in December, two in January, and one in February. One couple, both with ties to BU, married at Marsh Chapel, which waived its normal $500 fee for use of its space and wedding coordinator, says Whitney. For the other weddings, performed in the couples’ homes and, in one case, a park, Whitney did not charge a fee or request a donation.

Several courts have ruled against Trump’s proposed travel ban on six mainly Muslim nations, including a federal appeals court in San Francisco this week. The administration has asked the Supreme Court to uphold the ban in a pending case.

BU Today recently talked with Whitney about the issue.

BU Today: Were these marriages you performed moved up because of fear of Trump?

Whitney: These were either moved up or, in at least two of the cases, they hadn’t even officially gotten engaged, but they’d been talking marriage, and all of a sudden it was: now.

What nations were the immigrants from?

Two from Latin America, one from Africa, and one from the Middle East. The African one [is] from Kenya I think, and the Middle Easterner is from Lebanon. All of them are documented.

They’re from nations that wouldn’t have fallen under Trump’s travel order.

I don’t feel like any of the issues that I’ve seen with the people wanting to get married were actually connected to the bans. I think it’s more the sense that he was saying we need to get these immigrants out of here. I think it was the risk of getting deported now that they’re here.

How did these folks find you?

Two of them came through a friend and a colleague, respectively, who knew these couples and said hey, this has come up, they’re afraid, would you be willing to do this? I said of course. The other two [couples] are people I know.

Trump says we’re trying to protect the country, to see if our vetting processes are good enough. What’s your moral objection to what he’s doing?

Our vetting procedures are [already] so thorough. “Thorough” is a massive understatement, to the point that refugees who are afraid for their lives, it’s hard to get permission to come. And it doesn’t take much to get put on the denied list. I think it’s a made up concern that stokes the fears of his base and, thankfully, the courts have seen through it.

As a minister, are you concerned that some of these folks may be rushing into marriage, perhaps for understandable reasons, but that they aren’t ready yet?

Not so much. These have all been people who have been together quite a while and understood the ins and outs of their relationships and knew largely what they were getting into.

A couple saying, hey, we met at the bar last night and want to get married so he doesn’t get deported—I would certainly not come to the conclusion that I would agree to officiate.

In Love and Need a Green Card?

There is 1 comment on In Love and Need a Green Card?

In Love and Need a Green Card?
1
share this