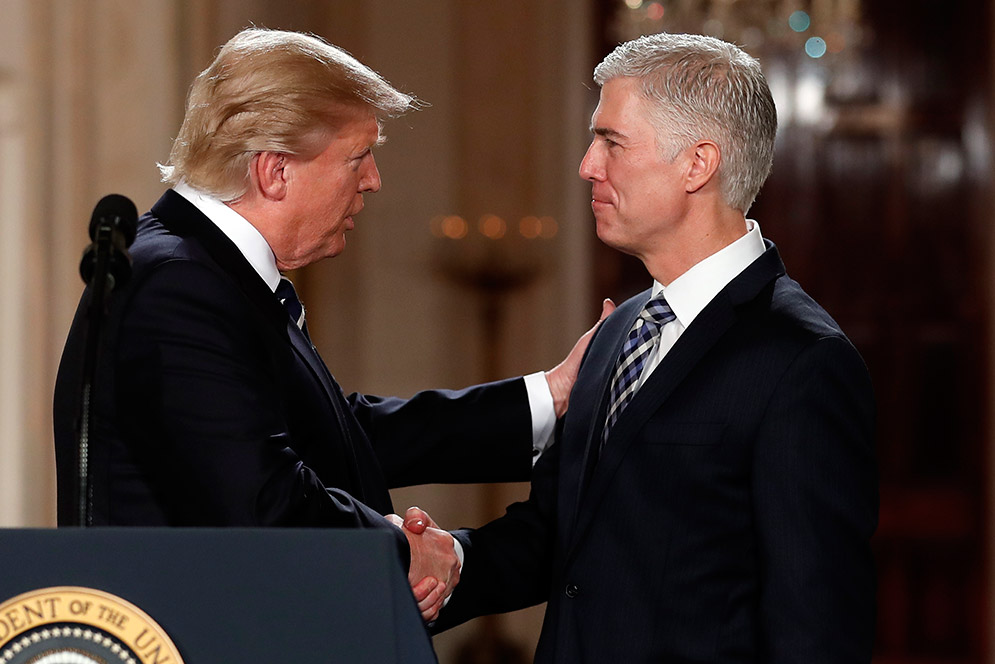 A prime-time TV special starring an originalist interpreter of the Constitution wouldn’t be any network scheduler’s top idea. But that was before Donald Trump became president. The showman-turned–chief executive stage-managed the introduction of his Supreme Court nominee, Neil Gorsuch, like a reverse version of The Apprentice, telling Gorsuch, in effect, “You’re hired” before a nationwide audience last week.

If appointed, 49-year-old Gorsuch, currently a judge on the US appeals court for the Tenth Circuit in Denver, would be the youngest Supreme Court justice. Trump’s pick drew immediate praise from conservatives and Republican senators and protests from civil rights groups and Senate Democrats, angered that Republicans blocked a vote on Judge Merrick Garland, President Obama’s choice to succeed the late Justice Antonin Scalia.

As a proponent of originalism, Gorsuch interprets the Constitution as he believes its framers would have understood the document. That conservative philosophy drew Trump to nominate him, yet Gorsuch may be the most mainstream jurist a Republican president could produce, says Jack Beermann, a School of Law professor and Harry Elwood Warren Scholar.

“For the Trump administration, after hitting a lot of foul balls in its first week, this one’s a home run for them,” says Beermann, an expert on the federal courts. While Gorsuch hasn’t had to rule on certain controversial issues, like abortion, as a federal appeals court judge, he did support Hobby Lobby’s religious exemption from Obamacare’s contraception mandate, a case the arts and crafts retailer won before the Supreme Court in 2014. (Gorsuch cited a law review article by Beermann once in arguing against judicial deference to federal agencies’ interpretation of regulations, the professor says.)

Beermann discussed Gorsuch and the implications of his confirmation with BU Today.

BU Today: If you were a senator, would you vote to confirm Judge Gorsuch?

Beermann: There’s no question that he has the qualifications, the temperament, the commitment to the rule of law that you want from a Supreme Court justice. But there are serious questions whether this position should have even been open for him. Last year President Obama nominated someone just as qualified as Gorsuch—nobody doubted that—and it was extraordinary that the Senate wouldn’t take any action at all. Most senators didn’t even have the courtesy to meet with the man. The Republican Party has been impeding nominations under Obama, even to lower courts.

One possibility would be to have a package deal, where there’s an agreement about what the next two appointments are going to be like, and that the Democrats will have greater input to the next one. There are some rumors that there’s already a justice considering retiring, Justice Kennedy, and his vote is a much more important vote. Gorsuch would fill the same niche as Justice Scalia. If Kennedy leaves, it could shift the balance of the court.

Obviously, Gorsuch isn’t who the Democrats would have chosen, but I don’t agree with any notion that he’s so far out of the mainstream that he’s not someone that ought to be confirmed. I think his views on exemption from laws based on religious views are extreme, but they’re not as extreme as they seemed 20 years ago. Hobby Lobby won their case in the Supreme Court. Maybe I’m out of the mainstream when it comes to those sorts of things.

I think originalism is a failed project. We ought to have our law based on what’s good for society today. What the framers thought was good in 1789 may be terrible for today’s society. You had a constitution written by a small minority; it was only property-owning white men—the vast majority of the American people were disenfranchised during that process—so to say that the views of those people ought to trump what’s good for society seems unsupportable as a moral matter.

What questions should the Senate want answered by this nominee?

If I were a senator, which is almost as likely as Donald Trump winning the Mr. Popularity contest, I would ask about judicial philosophy, and I would vote against anyone who’s an originalist, because I don’t think original intent is a sound philosophy.

When it comes to the executive branch, you want to give a lot of deference to the president to bring his own team in. The judiciary is a much different thing, the third branch of government, independent and with life tenure. So I think the senators ought to vote on Supreme Court nominees the same way they would vote on any piece of legislation: they ought to decide what’s best for the country, what their constituents would want them to do.

The Senate may want to ask him about gun control. He’s been very supportive of the rights of gun owners. The Supreme Court hasn’t really arrived at a formula for reviewing which restrictions are allowed and not allowed as going too far. I think the court has gun control exactly backwards. The purpose of the Second Amendment was to protect militia—people of military age owning military weaponry. But just the way the Supreme Court created the right to abortion in Roe vs. Wade, the court created the right to self-defense with a firearm. That right does not exist in the Constitution; it’s not supported by the text or history of the Constitution.

Should senators ask his views on abortion and Roe vs. Wade?

They definitely should ask. He’s not going to answer. This is a political process, and there are constituencies on both sides that really want to know. He hasn’t come out strongly on the abortion question. Based on his affinity for religious views that he supports in other contexts and the religiously based objections to abortion, I would predict that he would probably be open to overruling Roe vs. Wade. There still won’t be five votes, if he gets confirmed, for overruling Roe vs. Wade.

Is it proper for them to ask his view of President Trump’s immigration restrictions?

Yeah, I think they should ask. They’re not going to get a definitive opinion. That could come to the court. If a nominee said, here’s how I would decide a case, they’d have to recuse themselves.

It sounds like your observation would be, don’t exaggerate his impact on the court; it’s going to restore us to the status quo ante with Scalia.

Right. If either one of the Democratic justices or Kennedy leave the court, then you’re talking about changing the balance of power. You would have a solid five-member Republican majority on just about every issue where politics are salient.

There are 8 comments on Should Trump’s Supreme Court Nominee Be Confirmed?

Should Trump’s Supreme Court Nominee Be Confirmed?
8
share this