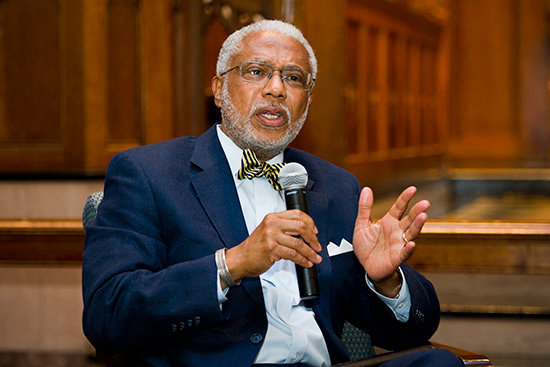 Nelson Mandela, Rosa Parks, Mahatma Gandhi, Idi Amin, Richard Nixon: you won’t find this eclectic group on many course syllabi, but they share one commonality. They are all examples of leadership—some moral giants, some moral pipsqueaks. These figures from history are among the case studies in the first MOOC (massive open online course) offered by the School of Education and the School of Theology.

Ethical Leadership: Character, Civility, and Community launched Tuesday and runs for eight weeks under the instruction of Walter Fluker, the Martin Luther King, Jr., Professor of Ethical Leadership at STH.

SED is involved, Fluker (GRS’88) says, because its dean, Hardin Coleman, approached him about teaching a MOOC on this topic, which Fluker has taught at other universities, such as Harvard, Morehouse College, and the University of Capetown in South Africa.

“I have interviewed over 20-plus leaders and leadership theorists that include our own leaders, from President Robert A. Brown and Provost Jean Morrison to deans of several schools,” says Fluker. Among those he’s interviewed outside BU are civil rights activists turned politicians John Lewis and Andrew Young, presidential advisor David Gergen, and numerous scholars of leadership.

Fluker says the MOOC will use video exercises, discussion forums, and student journals to probe its key lesson, which is that ethical leaders “are a part of stories and must be engaged in remembering, retelling, and reliving those stories.” For example, his own scholarly expertise includes the use of African American moral traditions in developing leaders such as Martin Luther King, Jr. (GRS’55, Hon.’59) and the late Dean of Marsh Chapel Howard Thurman (Hon.’67).

“Our scope, however, is not limited to African American leaders,” he says. “Rather, the vision is diverse, multicultural, and global.”

Fluker’s first MOOC is offered, as BU’s 14 others have been, through edX, the online platform the University joined three years ago. He sees several advantages to the online format over traditional classroom teaching, like “experimentation with innovative yet practical formats for teaching,” he says.

“Discussion groups are linked across the globe, students with disabilities have options to learn in their own way and their own time, and with the sheer number of students, professors are challenged to step back and continuously engage in monitoring and evaluation of what is being taught,” Fluker says. More than 6,000 students globally have enrolled in the class thus far.

Any students who get a grade of 60 or higher in the course may take a separate, six-week class online and receive graduate credit from BU. The class syllabus reads: “This course will help you get deeper into the videos and other course content as you prepare to bring your ethical leadership work to your area of ultimate concern.” Those interested may email elbumooc@bu.edu for more information.