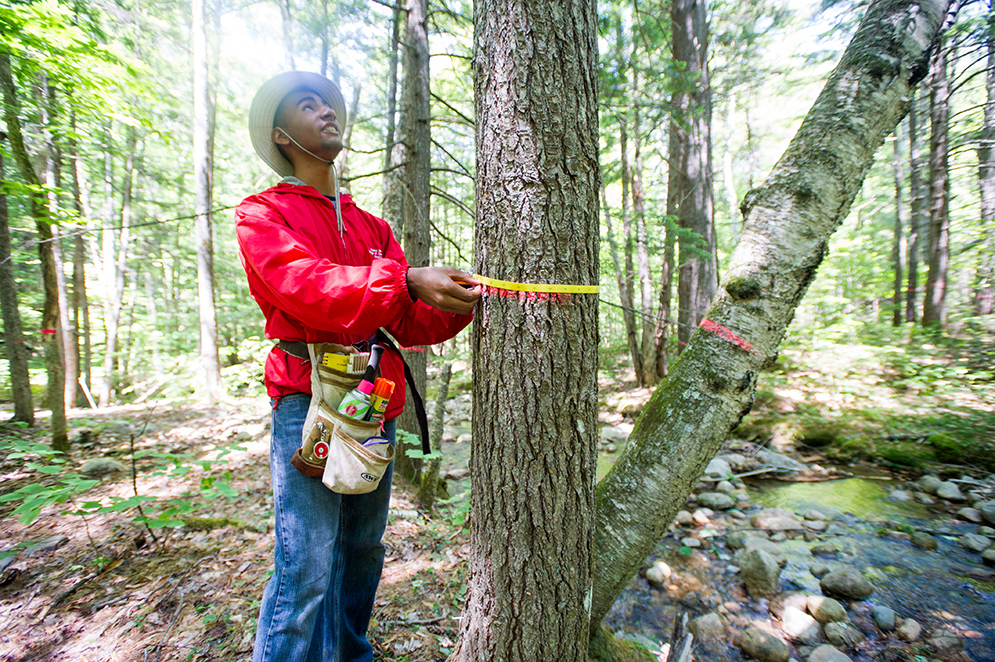 Eliandro Tavares (CGS’16, CAS’18) is part of the climate research team of Michael Dietze, a CAS associate professor. One of their tasks is measuring the diameter of trees in the White Mountain National Forest.

On a warm summer afternoon, Michael Dietze and his researchers leave their cars on the side of Bear Notch Road in Bartlett, New Hampshire, and hike into the White Mountain National Forest. They navigate the steep, wooded hillsides using a combination of GPS and remembered landmarks. A couple of hundred yards in, a white PVC pole marked #40,30 tells them they have found the southwest corner of the 10-meter square on the banks of rocky Bartlett Brook that they’ll study today.

Out come the digital calipers, tape measures, notebooks, and compass. An iPad holds a spreadsheet containing the location and details of each of the 1,500-plus trees in the one-hectare (2.47-acre) study plot, which is subdivided into a grid of those 10-meter squares. Their task: record the growth and health status of every one of those hemlocks, maples, and other tree species. This is just one of four plots they’ll survey over the course of a month, in an annual ritual that began in 2012.

“Every tree is mapped, and they’re remeasured every year,” says Dietze, a Boston University College of Arts & Sciences (CAS) associate professor of earth and environment.

The research is BU’s part in the $4.3 million, five-year National Science Foundation study Climate Change Impacts on Forest Biodiversity: Individual Risk to Subcontinental Impacts. Dietze is one of seven principal investigators, with others coming from Duke University, Michigan State University, Columbia University, the University of Georgia, and the Smithsonian Institution. There are study plots at 15 sites in the East, among them Maryland, Virginia, Georgia, Florida, and Puerto Rico. With a wide-ranging sample of the effects of climate change on individual trees, scientists hope to better predict future climate risks.

Saplings, seedlings, and even dead trees become data points, which will be fed into computer models that Dietze is helping to develop. The goal is to allow scientists to project the effects of climate change as some species surge and others recede.

Each plot has a sensor array with a battery-powered circuit board that records data on temperature and moisture both in the air and underground. Downloaded twice a year and combined with meteorological data from other sources, the information will give scientists a climatological background they can use to assess changes in the tree population.

The researchers get down on hands and knees to examine dozens of seedling plots on the forest floor and check the contents of seed-catching baskets. “If the climate is changing, you’re going to see the future forest in the understory,” Dietze says. “If a species can now migrate in, where previously it was too cold, you’re going to see it in those early stages. Or if it’s now too hot for a particular species, you’re going to see the adult trees doing fine, but that species will not produce seedlings anymore.”

Eliandro Tavares (CGS’16, CAS’18), Amber Wendler (CAS’18), and Giselle Fernandez, a University of Southern Indiana senior, signed on for summerlong internships led by BU postdoctoral associate Istem Fer. They work for a month on the plots in New Hampshire, followed by a month at another site on Michigan’s Upper Peninsula.

The four work on their own most of the time, but Dietze has driven north today for a combination checkup and pep talk. His wife, Beth, four-year-old son, Colin, and six-year-old daughter, Ellie, have come along to make a family weekend of the trip. Ellie is an intrepid hiker and budding biologist, leading the way through the brush at times and listening intently as her father patiently explains the different stages of a tree’s life.

Ellie also knows when science should end and family time begin. After tromping across yet another hillside, she stops and announces firmly for all to hear, “Daddy, it’s time to go to Story Land.”

Analyzing the data on climate change

The New Hampshire study is just one of a dizzying array of projects under way in Dietze’s plant ecology lab, which leads the development of PEcAn, the Predictive Ecosystems Analyzer, an open-source software platform for analyzing diverse data and ecosystem models, which is funded by grants from the National Science Foundation, NASA, and others. His projects focus on climate effects in a wide variety of areas, from changing tree populations to emergent diseases, invasive species to the wildfire cycle, biodiversity to biomass sustainability. “Our real niche is bringing models and data together,” he says.

Underlying most of his efforts is the role of forests in the carbon cycle. Only 40 to 50 percent of the CO2 emitted by human activities (for the most, part burning fossil fuels) stays in the atmosphere. The rest is absorbed on land, primarily by vegetation such as trees, and in the oceans. Scientists call such a carbon reservoir a carbon sink, and accurate projections of how such sinks work will be critical in predicting effects of climate change.

Despite all the projects he’s busy supervising, Dietze is technically on sabbatical, working to integrate the PEcAn tools into the 10-year, $100 million NGEE (Next Generation Ecosystem Experiments) Tropics project. Sponsored by the US Department of Energy, it aims to improve earth system models for a better understanding of how tropical forests will respond to climate change. The critical question is whether these forests will continue to work as carbon sinks or become carbon sources as vegetation dies because of a warming climate.

“The land sink is probably the second biggest source of uncertainty in climate change predictions after cloud physics, and I don’t do clouds,” Dietze says. “I count trees.”

Gathering data deep in the forest

Dietz’s researchers work in teams of two, one measuring and surveying the trees, the other inputting the results into an iPad. Fer carries a paper copy of the 34-page experiment protocol, and they often refer to it. Each tree bears a numbered tag near the ground, and most are also marked with spray paint to indicate where to measure their diameter: “at breast height,” officially 4.5 feet. The spreadsheet on the iPads has columns to record facts from the trees’ diameter and height relative to the forest canopy to signs of damage and disease.

“It might seem too much, but we need that level of detail,” says Fer. “You can have satellite data or other kinds of measurements, but you really need this individual level of data to see what is happening.”

She looks at home in the woods with her tool belt and hiking boots, bounding from rock to rotting log with the assurance of a veteran. But that’s an illusion. “Actually this is my first time in the field,” she says. “I am a computational scientist. I’ve been modeling trees, but this is the first time I am seeing a hemlock.”

An entire summer in the woods is a new experience for the interns, too. They stay at a Forest Service camp in Bartlett, usually sleeping in tents in the yard, walking the woods all day with equipment belts weighed down not just with the tools of their trade, but with water and pretzels and bug spray. Also bear spray.

“Black bears are more likely in the next plot, which is up the mountain,” says Tavares.

“There are blackberry plants there,” Wendler adds.

(In fact, their first bear encounter comes a few days later at the Forest Service camp, when one wanders through the yard without incident. “It was a very peaceful black bear,” Fer says.)

Wendler is a biology major specializing in natural resources and conservation, and despite only a few nights of camping experience, she is glad to be outdoors. Tavares majors in environmental science, specializing in analysis and policy, indoor pursuits that he says will only be helped by experience in the field. Also a bio major, Fernandez found the internship by pure chance. She says BU is now definitely on her list for grad school applications.

All three say that a summer tromping around the woods measuring tree trunks to the centimeter is more important than it might look.

“As the new generation, we definitely know the effects of global climate change, and we know it’s an issue,” Tavares says. “By the end of this we’ll be able to tell you about tree number 7516, how much that has grown or not. It might seem like one tree, but no one’s ever done this before on this big a scale.”

Studying Climate Change One Tree at a Time

Studying Climate Change One Tree at a Time
0
share this