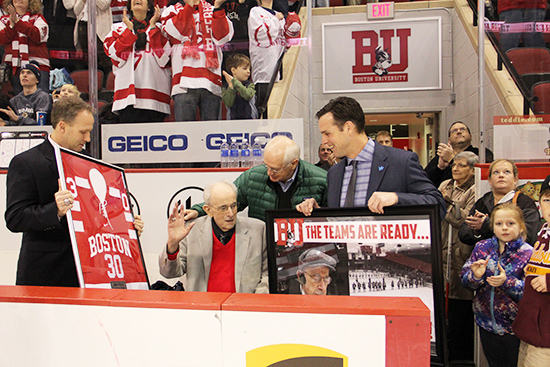 For 30 years, Jim Prior’s signature call as announcer at BU hockey home games got pulses racing for fans and players, even before the puck dropped. But according to Terrier head coach David Quinn, it was someone else’s voice that helped him get the job.

One day in 1986, the Terriers—including Quinn (CAS’89), then a sophomore defenseman—were about to start a game when officials realized that the singer scheduled to perform the national anthem hadn’t shown up.

“Jim was there, filling in as announcer or running the clock, and he pulls out a cassette tape and says, ‘I’ve got Kate Smith singing “God Bless America” right here,’” Quinn says with a laugh.

It wasn’t the national anthem, but it was close enough. After that, Quinn says, assistant coach Ben Smith and others went to bat for Prior to become BU’s full-time announcer. “You’ve got to get a guy with that preparation and thoroughness,” he says. “He had it in his pocket!”

“My dad loved Kate Smith,” confirms his son Dennis, who heard the story for the first time last week. “I think he played that song every night at dinner.”

James A. Prior, Jr., passed away July 23 at 85 of complications from a stroke, seven months after he was honored at a January hockey game and presented with a BU hockey jersey with the number 30, for his three decades on the job.

“He was a showman of the hockey rink, and he really tried to make it exciting for the fans,” says BU hockey icon Jack Parker (Questrom’68, Hon.’97), who coached the Terriers for 40 years. “But he was just the opposite away from the microphone—quiet, a real gentleman, never intrusive at all.

Quinn was a high schooler about to play in a Hockey Night in Boston showcase game at a rink in Stoneham, Mass., when he first heard Prior’s voice over a public address system. As a player, hearing Prior’s trademark “Let’s play hockey!” would get your heart going a little bit faster, he says. “It’s almost like an extra coach. He’s reminding you that it’s game time.

“I don’t know anyone who had more passion for hockey than Jim did,” says Quinn. “He is certainly identified with BU hockey as much as anybody, and he will be sorely missed.”

Prior got his start with the game as a Bruins fan and a hockey parent, says Dennis, who was a goaltender in high school and college and is now a police sergeant in Springfield, Mass.

“He loved the game, and he was always there, yelling from the stands, supportively,” he says. “He decided to get more involved, and at some point he started keeping time or running the clock. And then he moved over to announcing.”

Prior was inducted into the Massachusetts Hockey Hall of Fame and was awarded the Founders Medal from Hockey East, both in 2013. He was the announcer for the Beanpot and Hockey East tournaments and for several other college and high school teams. His long association with Arlington Catholic High School began in 1978, and it was there, apparently, that he created his signature line: “Let’s play hockey!”

He also worked with youth hockey groups. When the Eastern Junior Elite Prospects League was formed in 2012, the under-12 conference was named the Jim Prior Conference, “in honor of his dedication and hard work,” says league commissioner Henry Lazar.

A Cambridge native and longtime Arlington resident, Prior served in the US Navy for 20 years, and later worked for Boston engineering firm Stone & Webster. He married Antoinette “Chickie” Ferraro in 1962, and they raised two sons.

As Prior got more involved with the Terriers, the family would joke about BU being his other wife, Dennis says. “And my mother would say, ‘See if they wash his clothes or feed him dinner.’”

Some might assume that being a fill-in announcer for an occasional Bruins game would have been the pinnacle of his career, but his son says it was the college games—especially BU games—that mattered most to him. It was a pure form of the game, college kids playing their hearts out, not yet complicated by money and contracts.

Health issues forced Prior to miss this past season’s BU Hockey East tournament first round. His final game as announcer was the Terriers’ last regular-season home game, a 3-2 win over UNH February 20.

Prior is survived by his wife, two sons, Michael, of Arlington, Mass., and Dennis, two sisters, and four grandchildren. A funeral mass at Saint Agnes Church, Arlington, was celebrated on July 28. Memorial donations may be made to the New England Center and Home for Veterans, 17 Court St., Boston, MA 02108.

The Voice of BU Hockey

There is 1 comment on The Voice of BU Hockey