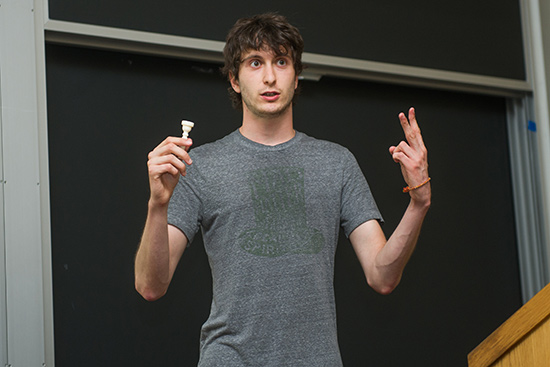 David Baylies used a 3-D printer at the Engineering Product Innovation Center to make a plastic mouthpiece as part of his electronic trumpet project. Photo by Cydney Scott

David Baylies’ small South Campus bedroom is crowded with musical instruments: an electric guitar, an electric bass, amplifiers, an electric keyboard, and his first love, an old, well-worn trumpet. But the instrument most occupying his attention this summer doesn’t even look like one.

It’s a double-deck green circuit board array, with a surface area smaller than a playing card. The bottom layer is the main processor board, a Teensy 3.2, bought online. The top layer holds a microphone, an audio input adapter, and a headset jack. A single output connects the device to his MacBook Pro, where the data is run through the Garage Band music program and output to a Peavey amp.

Baylies (ENG’17) is building a better electronic trumpet as his summer Undergraduate Research Opportunities Program (UROP) project. UROP matches students with faculty mentors across the University and provides funding for their projects.

“I’m a musician at heart,” Baylies says. “I’m in school for mechanical engineering, and so I wanted to combine the two. In doing that, I’ve grown much more passionate about engineering.” He picks up a plastic trumpet mouthpiece he made using the Engineering Product Innovation Center’s 3-D printer and blows a fuzzy note into the microphone. The sound is sampled 44,100 times a second and converted to data. A matching note comes out of the amp, while a wall of digital readouts scrolls down the laptop screen. It’s the beginning of the project—far from a finished product, but it’s a start.

Electronic trumpets already exist. The best known are the Yamaha EZ-TP and the Morrison digital trumpet, both all-black horns with vaguely steampunk looks. To Baylies’ trumpeter’s ear, they don’t do the instrument justice. They just produce perfect notes, without the nuances of human expression. There’s no sliding between notes, no subtle changes in timbre or voicing, no imperfections, no human error, all essential parts of jazz.

Baylies picks up his circa 1970 Bach Stradivarius trumpet and demonstrates with a single clear-as-a-bell note, followed by a quick jazz riff, slurred at the edges. He grew up in the Boston suburbs and was a standout classical trumpeter by sixth grade, but gravitated toward jazz in his later teens, seeking more personal expression, as practiced by great players like Miles Davis.

“I’ve found out you can look at most genres of music through a jazz lens,” he says, “because in jazz you’re challenged to understand every aspect of the music, every kind of rhythm, every kind of melody, every kind of harmony, every kind of tone.” Pop, reggae, electronic, and funk have all become part of his repertoire.

Baylies’ UROP faculty mentor, R. Glynn Holt, a College of Engineering associate professor of mechanical engineering, is excited about this notion of a nuanced, playable trumpet. “I see David’s major contributions as getting into the real nitty-gritty of the beginnings of a sound,” he says.

The Teensy processor will take the data from the mouthpiece and three trumpet valves via the microphone, analyze it, and convert the key variables to data for the MIDI (Musical Instrument Digital Interface). By choosing the right variables, Baylies hopes to produce a true trumpet voice.

Once the sound is digital, it can be manipulated endlessly. “You can turn anything into anything,” he says. “The ideal end result is a cool new instrument that allows people to do things they couldn’t do before.”

Baylies’ project was made possible by a $4,200 stipend from the BU Arts Initiative, through UROP. He spent the first few weeks teaching himself to program in the computer language C and researching processors. Now that he has the system working, he needs to assemble a prototype. He made two plastic mouthpieces so he won’t have to punch a hole in a real one for the microphone. He may take an existing valve set or make his own. Then he has to fit them all together.

“I have no concept of what it’s going to look like,” he says, “but something minimalist. I want to get rid of the bell altogether. I don’t want to pretend there’s something there that isn’t necessary anymore.”

Holt says that Baylies was a keen student in his acoustic class. “When he said he wanted to do this project and asked if I would be his advisor, I said yeah, with the caveat that there are things I don’t know anything about. Trumpet for one,” Holt says with a laugh. “I really know nothing about trumpet except that my twin brother used to play it in high school band. That’s not much to go on.”

Because this trumpet is mostly digital, Baylies isn’t sure how well it will fit into his engineering program after this summer, but Holt says the high-fidelity transduction—the faithful reproduction in voltage of the input pressure from the mouthpiece—is squarely in the area of mechanical engineering, involving fluid mechanics, acoustics, pressure sensing, and velocity sensing.

“I have no idea about the actual market out there for these electronic trumpets, but I can imagine,” he says. “When physical things are replaced by synthesized things, you open up new doors. There are so many things you can do that you can’t do with a physical trumpet. If what David gets is something that has more fidelity to the nuances of the player, which is one of his major goals, there’s a whole new world.”

“I’m going to love that,” Baylies says. “Ideally, I’ll be able to take this instrument to local jazz clubs, like Wally’s Café or the Lilypad, make new music with people, and show them what you can do with technology.”