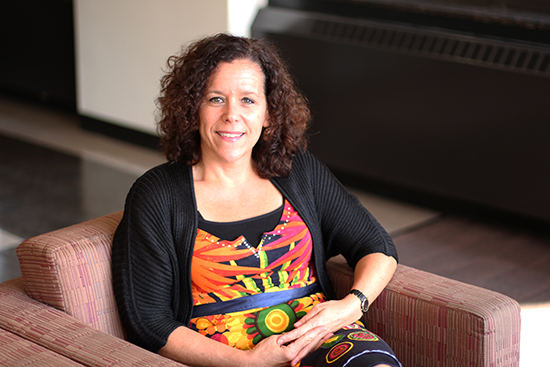 Lynn O’Brien Hallstein, a CGS associate professor of rhetoric, argues in her new book, Bikini-Ready Moms, that celebrity-fueled “momism” is a setback for gender equality. Photo by Rachel Swirsky

As if new mothers don’t face enough societal expectations and pressures, they are now taunted by celebrity-fueled media messages about postpartum “bikini-ready” bodies. Google any combination of the words “bikini” and “mom,” and out gushes a torrent of websites devoted to returning postpartum mothers’ abs to their prepregnancy tautness, or achieving a Gisele-esque body, even if they didn’t start out with one. “Join the movement. Become an After,” command the folks at bikinibodymommy.com. Skinnymom.com has regimens to reverse “lower belly pooch meltdown,” exercise moves to “lift the girls,” and a “we’ve got your back” guide to getting rid of “back bulge.”

In her new book, Bikini-Ready Moms: Celebrity Profiles, Motherhood, and the Body (SUNY Press, 2015), Lynn O’Brien Hallstein, a College of General Studies associate professor of rhetoric, gives this misguided “new momism” a swift intellectual kick in the gut. The fetishizing of celebrity “baby bumps” and high-profile new mothers “rocking” string bikinis is nothing more than an updated, ominous version of the “having it all” myth, she says, and is a setback for feminism.

The definition of good motherhood used to involve primarily the care of children. But contemporary mothers are pressured to look toned and perfect, a phenomenon that has worked its way into the expectations associated with good mothering. New mothers are bombarded with media messages to become bikini-ready immediately postpartum, which is rarely even possible.

Healthy women come in all shapes and sizes. In her book, O’Brien Hallstein analyzes media profiles of celebrity mothers to determine the ways that they encourage all mothers to engage in body work toward a specific media-touted ideal. And websites such as Skinny Mom go so far as to imply that achieving that ideal will solve any work-life balance struggles new moms might experience. According to the publisher’s description, “Bikini-Ready Moms also considers the ways that maternal body work erases any evidence of mothers’ contributions, both at home and in professional contexts.” O’Brien Hallstein, who team-teaches a graduate seminar on contemporary motherhood at BU with Anna Villalobos, a Brandeis assistant professor of sociology, also sets out ways for women to confront and deflate this trend.

Although a scholarly tract dense with footnotes and citations, Bikini-Ready Moms is as entertaining a read as it is eye-opening. O’Brien Hallstein contrasts the starkly different media coverage accorded to Kate Middleton—Catherine, Duchess of Cambridge—with that of obesity-battling Kim Kardashian during and immediately following their first pregnancies. “While individual media profiles portray Middleton as the perfect Jackie O, the individual profiles of Kardashian continue to work rhetorically to reinforce the theme that Kardashian is a pregnant fashion disaster who makes bad choices, as evidenced in her wardrobe malfunctions.” Kardashian was often described as “‘squeezing’ into ‘tight’ clothes,” writes O’Brien Hallstein, and readers were treated to close-ups of her swollen feet. “Middleton is held up as the good mother because her body reveals that she’s training well, she’s pregnant in bump only, but Kardashian’s a mess.”

You don’t concern yourself with the detritus of popular culture? It doesn’t matter. O’Brien Hallstein says that even those women who “would like to believe that we are somehow immune to these messages, academics included, are not.” She cites a fellow academic’s conclusion that “even mothers who deliberately avoid TV and magazines, or who pride themselves on seeing through the celebrity profiles, have trouble escaping the standards of perfection…that the media ceaselessly atomize into the air we breathe.”

The author says the point of her book is to acknowledge that something has to be done about the neotraditional new momism, especially in family life.

She references waves of feminism: the first, in the late 19th and early 20th centuries, focused on equal opportunities, particularly the right to vote, and the second wave, which surged in the 1960s and subsided in the 1990s, a time when feminism dovetailed with the anti–Vietnam War and civil rights movements, and ultimately became a call for sexual and reproductive rights for women.

Second-wave feminists such as Betty Friedan, author of the groundbreaking 1963 treatise The Feminine Mystique, were “rightfully concerned that there was an ironclad connection between femininity and maternity, and that maternity was women’s destiny, so they decided to focus on women gaining access separate from mothering,” says O’Brien Hallstein. “They weren’t antimotherhood.” She says her book draws attention to a new, third wave, confronting “this other thing that has reared up”—the phenomenon of the bikini-ready mom.

“One of the reasons I wrote the book is I’m really hopeful that young people will have certain conversations before the babies come. I spend a lot of time addressing the neotraditional family,” she says. “Certainly many well-educated people believe in gender equity, but when the babies come, what they do in practice is sort of almost pre–second wave.” The book’s final chapter discusses the bigger picture, citing a study showing that gender inequities persist, even among couples with well-educated, privileged men who say and believe all the right things, want to be more engaged, and fully support the idea of their partners having careers. A closer look at these couples revealed that not much had changed.

There may be more gender equality in the public sphere, but there is far less in the private sphere, says O’Brien Hallstein. And it doesn’t help that if you become a mother, you feel pressured to get your fit body back and to exercise what she calls the assumed “American right to wear a string bikini.” This thinking is misguided and dangerous and makes an impact on gender equality in a broader sense, she says, because it’s literally erasing any physical sign of pregnancy and childbirth so women can say, “Yes of course I have children, but I’ll be back in six weeks, and keep all that other stuff private and at home.”

What is true is that babies need a lot of time and energy, O’Brien Hallstein says. “Celebrity images and profiles work…to erase the difference that maternity makes in women’s lives by encouraging mothers to engage in a third shift of body work,” she writes. “I conclude that celebrity mom profiles now suggest that maternal body work is the solution to both ‘having it all’ and ‘doing it all.’ We need to pay attention to this.”

The Tyranny of Bikini-Ready Moms

There are 5 comments on The Tyranny of Bikini-Ready Moms