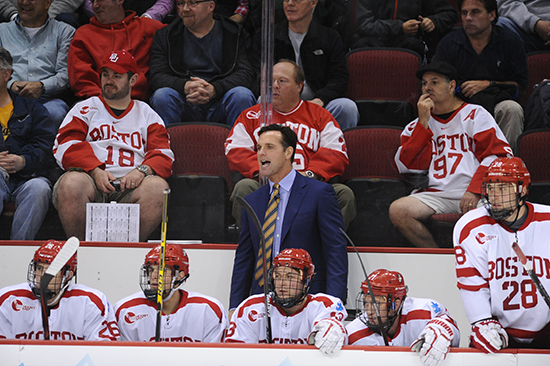 David Quinn (CAS’89) (center) is in search of his first Hockey East Tournament title as head coach of the Terriers. Photos by Steve McLaughlin/BU Athletics

After a remarkable season that has already netted a Beanpot title and the conference regular season championship, the top-seeded Boston University men’s ice hockey team (23-7-5) is hoping to capture its first Hockey East Tournament Championship in six years this weekend.

Tonight, the team—ranked sixth in the nation—will face off against eighth-seeded New Hampshire in the Hockey East Tournament semifinals at TD Garden. The last time the Terriers won the tournament, in 2009, they went on to win the NCAA Tournament. They of course are hoping that history repeats itself.

“It’s funny, once you start winning, it’s like you can’t stop,” says head coach David Quinn (CAS’89). “We’ve gone through this setting—semifinal and then a final—once already in the Beanpot, so I think the experience really helps. We just have to keep playing our style, and the results will come. I think winning the Hockey East will go a long way for us in the NCAA Tournament.”

Key to the team’s success this weekend is Jack Eichel (CGS’16). Coming in as number one in this year’s recruiting class (according to College Hockey News), the rookie phenomenon entered the postseason leading the nation in points (55), assists (37), and plus-minus (+36). He’s continued to dazzle in the playoffs, registering two goals and four assists in last weekend’s Hockey East quarterfinals, where BU was the only team to sweep its opponent (Merrimack College).

The rookie center has amassed a string of accolades. In addition to being the first freshman nominee in 12 years for this year’s Hobey Baker Award, given to the top college hockey player, he has been selected to the 2014-2015 Hockey East Pro Ambitions All Rookie Team, and earlier this week he was named Hockey East Squad Locker Scoring Champion and Army ROTC Three Stars Award winner. But it’s Eichel’s poise and awareness on the ice combined with his unassuming attitude and leadership as much as his stats sheet that has earned him the respect of fans, coaches, and players.

“Eichel’s been a phenomenal player the whole year,” says captain Matt Grzelcyk (COM’16). “He can create his own offense, make something out of nothing—he can just do it all. Even sometimes when he might seem rushed or trapped, he just knows how to handle the situation. Every time he touches the puck, something good seems to happen.”

The Terriers will also be looking to assistant captain Evan Rodrigues (SMG’15) to help lead the way this weekend. The Ontario native entered the postseason third in the nation in points (49) and second in assists per game (.97). He recorded five points (one goal, four assists) during last weekend’s sweep of Merrimack. The two-game series landed him the second-highest point total in the nation (54), one spot behind a guy named Jack.

Playing alongside Rodrigues has “been awesome,” says Eichel. “It’s been a lot of fun playing with him. He’s been a real good leader, and he’s an extremely skilled player, so he puts a lot of points on the board. He’s taught me one or two things, but overall, he just helps everyone out.”

Forward Danny O’Regan (SMG’16) rounds out a solid offense that currently ranks second in the country. While Rodrigues and Eichel seem to capture most of the headlines and awards, it can be argued that O’Regan has been the glue in this year’s team. Not only does he quietly fill up the stat sheet (he was 12th in the nation in points per game entering the postseason, at 1.24), but he brings a certain toughness to the rink that inspires teammates.

On the other side of the puck tonight, the Terriers will have to contain New Hampshire Wildcats forwards Grayson Downing and Tyler Kelleher. Downing is currently tied for second in Hockey East in scoring (21), while Kelleher is tied for sixth in points (41).

“They’re dynamic players, gifted offensively,” says Quinn. “You have to finish checks on them; you can’t let them slip out. We’ll be keeping an eye on them the whole game, because they’re dangerous players. If we can contain them, I think we’ve got a good shot.”

How do the Terriers plan on stopping the duo? The answer lies in defenseman Grzelcyk. The 2015 Beanpot MVP leads the 14th best defense in the country, allowing just over two goals per game, and entered the playoffs sixth in the nation among defensemen in points per game (.91).

Despite their success so far this season, the Terriers are taking nothing for granted.

“It’s going to be a tough game,” Eichel predicts. “We didn’t really play a good game when we were up in New Hampshire, and they’ve been pretty hot of late; they just beat Providence. We’re going to need our A game every game from here on out, ’cause we don’t take anything for granted.”

The Boston University men’s ice hockey team takes on the University of New Hampshire tonight, Friday, March 20, at 8 p.m. in the Hockey East Tournament semifinals at TD Garden, 100 Legends Way, Boston. Tickets can be purchased at the TD Garden box office, online here, or by calling Ticketmaster at 800-745-3000. Ticket prices start at $17 for balcony seats, $30 for loge seats, and $39 for club seats and the loge first row. Semifinal tickets include admission to both the BU–New Hampshire semifinal game, and the University of Massachusetts, Lowell–University of Vermont semifinal game, which begins at 5 p.m. Winners of each semifinal game will advance to the Hockey East Championship game tomorrow, Saturday, March 21, at TD Garden at 7 p.m. The winner will earn an automatic berth to the 68th annual NCAA Men’s Ice Hockey Championship Tournament. Tonight’s and tomorrow’s games will be televised live on NESN and NBCSN.

Emmanuel Gomez can be contacted at mannygo@bu.edu.