In the video above, David Wluka (CGS’66, CAS’68, GRS’70) accompanies his father, Icek, a Holocaust survivor, to the site of the former Auschwitz-Birkenau concentration camp, where Icek was imprisoned for three years. They made the trip in 1988, on the 45th anniversary of the Warsaw Ghetto Uprising.

Icek Wluka led his son David through the iron gates of Auschwitz. It was 1988, the first time he had returned to Poland since the war, and he remembered every inch of the camp where his seven siblings had died. Wluka showed David the barracks where he had slept from age 20 to 23, the crematorium where he had been forced to work, and the field where he had sown potatoes with a rifle pressed to his head.

Hoping to evoke the life the Nazis had ripped from him 46 years earlier, Icek brought his son four hours north to his ancestral hometown, Nowy Dwór, Poland. He wanted to show David where he came from: his house, his father’s blacksmith shop, the synagogue, and the cemetery where his father was buried. But the Nazis had purged every trace of the 4,000 Jews who once lived in Nowy Dwór. Even the cemetery was gone. The Nazis had used the caskets, sand, and bones for concrete and the matzevot (headstones) to fortify the roads for their tanks.

“There’s no sign that it ever was a cemetery,” says David Wluka (CGS’66, CAS’68, GRS’70). “It was just a big vacant field with holes.” Squatters had taken up residence on the land that “belonged to no one. There was no place to go back to, where our roots were, and see the house or go to the cemetery. We had no history we could put our hands on.”

There, the father and son said the Mourner’s Kaddish for the Jews who had been exhumed from this sacred ground, and Wluka was swept with emotion, watching his father praying in the barren field. When they left Poland, David and Icek were determined to save the cemetery, but life intervened, and it would be more than 20 years before David could revive the lost history of the town where his father was born.

“We had no history we could put our hands on.”—David Wluka

In 2010, to honor Icek, establish a site of remembrance, and give his own children and grandchildren a link to their heritage, Wluka, together with Ze’ev Shaked, the son of Icek’s father’s partner in the blacksmith shop, established the Nowy Dwór Jewish Memorial, a nonprofit foundation devoted to restoring the cemetery and the Jewish heritage of Nowy Dwór. In collaboration with the city’s mayor and citizens, the Jewish Community of Warsaw, and the Chief Rabbi of Poland, Wluka and Shaked secured the cemetery property. They evicted the squatters, filled in the empty graves, and put up a fence to protect the land. Just before the groundbreaking ceremony, a municipal utility crew made a poignant discovery: 12 headstones buried beneath a nearby road.

“Now that we know roughly where the headstones are, we will be careful with future work, but we can’t dig up good streets looking for them,” the mayor told Shaked. But when the groundbreaking ceremony garnered attention from the local press and Polish national television, that’s exactly what the city did.

To date, they have unearthed 125 of the estimated 800 matzevot. Because there is no record of the original burial plots, the foundation commissioned a memorial wall to mount the stones on. They are “works of art,” Wluka says, inscribed with biblical passages, poetry, and songs in Hebrew. “To think that they had been buried six to eight feet underground since 1942… When I touched the headstones at the dedication ceremony, I just lost it. I broke down completely.”

Wluka and Shaked have since expanded their undertaking to honor all 4,000 of the city’s Jewish residents who perished in the concentration camps, none of whom have graves. They established a 100-foot memorial wall of black granite inscribed with the names of the dead. The wall has reunited families separated by the war—as have the foundation’s efforts to publish the Jewish records from the local archives.

“I’ve seen the handwritten record of my father’s birth. I’ve seen the handwritten record of my grandfather’s marriage,” says Wluka, who so far has traced his own family back to 1832. “It gives us a sense of history and who we are. It is that sense of who you are, where you came from, who you were, that helps you go forward.” The foundation is translating the records and posting scans on the project’s website to help other Jewish families trace their roots to Nowy Dwór. 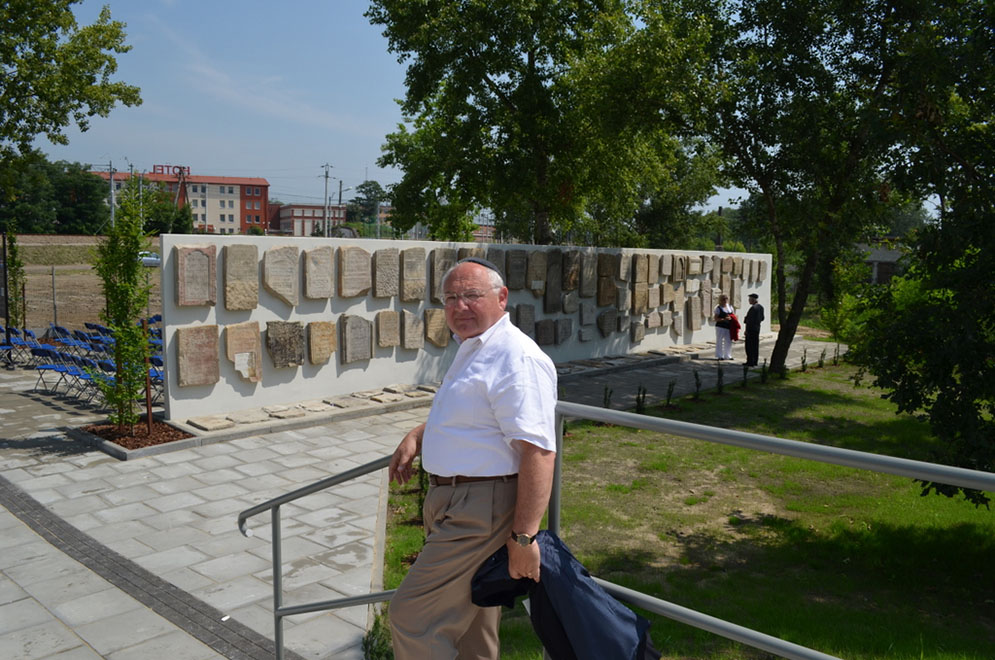 When David Wluka first visited the Jewish cemetery in Nowy Dwór, Poland, with his father, “it was just a big vacant field with holes” where the headstones had stood. Those headstones, plundered by Nazis, were “works of art” inscribed with biblical passages and poetry.

Wluka’s work figures into a widespread movement to reestablish the Jewish culture stripped from Poland during the Holocaust. Polish Jews, with assistance from the Foundation for the Preservation of Jewish Heritage in Poland, are restoring synagogues and other monuments in towns and cities throughout the country. Thanks to a 1997 law granting Jews the right to reclaim communal property, they are repossessing more than 1,400 cemeteries, many plundered by the Nazis.

Nowy Dwór has embraced the effort: the Taxi Drivers Association has commissioned a four-foot stainless steel Star of David for the cemetery fence, and the mayor has spearheaded a Jewish walking tour of the town. The tour booklet illustrates the locations of former Jewish landmarks—the synagogue, the literary presses, the rabbi’s house—even Icek’s father’s blacksmith shop.

Wluka and Shaked also establisheded an annual tolerance essay contest at the local high schools, as well as collaborated with Wluka’s cousin in Gedera, Israel, to bring 120 children from Gedera to Nowy Dwór for a three-day conference on tolerance with their Polish counterparts. The Nazis so eradicated the Jewish culture from Poland that before this conference, “the Polish kids had never seen Jews before,” Wluka says, a fact echoed by 15-year-old Bartosz Cheda in his award-winning essay: “I don’t know any Jewish citizen personally, but I know one important thing—I belong to the generation brought up in a free, democratic country….We must know that xenophobia, bigotry, nationalism, and hostility toward all the ‘others’ are actions which sooner or later will lead every society to nothing.”

“It is that sense of who you are, where you came from, who you were, that helps you go forward.”—David Wluka

While his work has expanded in ambition and scope, Wluka remains dedicated to his original goal of restoring the cemetery, to give his family—and thousands of other Jewish families—a history they can “put their hands on.” He wishes his father were here to see it. Soon after returning to the United States in 1988, Icek had a heart attack, and although he slowly recovered, early-onset Alzheimer’s stole his final years, as the Holocaust had stolen his youth.

“When we would visit my father in the nursing home, he had no clue who his great-grandson was,” Wluka says. “You think about how he came to this country with virtually nothing and made a life for himself and my mother and had three sons and put us all through college….After all he went through, to not have a peaceful end to his life was dramatically unfair.”

Wluka is raising funds to unearth the remaining 600 matzevot that have been buried beneath the roads for more than 70 years. He hopes his grandfather’s is among them.

A version of this story originally appeared in the summer 2015 edition of Collegian.

There are 8 comments on Saving an Ancestral Cemetery