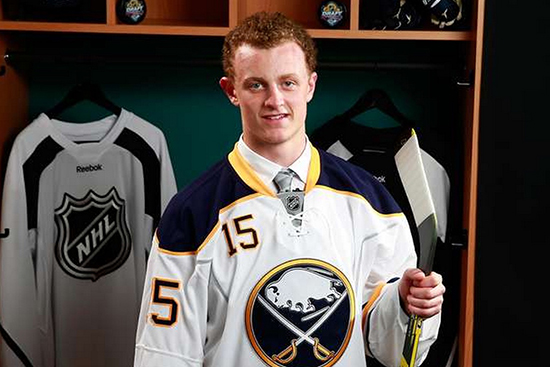 Jack Eichel (CGS’16) leaves BU with many accomplishments, like being the 2015 Hockey East scoring champion and just the second freshman ever to win the Hobey Baker Award. Photo courtesy of the Buffalo Sabres

Jack Eichel, the NHL’s number two draft pick, announced yesterday that he is leaving Boston University to play professional hockey for the Buffalo Sabres. Eichel (CGS’16), who would have been a sophomore this fall, was selected by the Sabres last Friday in the first round of the 2015 NHL draft.

Entering the league as a rookie, Eichel reportedly signed a three-year entry-level contract that gives him the rookie maximum of $925,000 a year. According to the Buffalo News, with bonuses, his salary could be closer to $3 million annually.

“I’d like to thank the Boston University family for everything that they have done for me,” Eichel said in a statement released yesterday. “This past season has been one of the best years of my life. I’d like to especially thank Coach Quinn and his staff, all of the equipment and medical personnel, my teammates, my academic advisors, and the entire athletic department. I’m looking forward to starting the next chapter in my life with the Buffalo Sabres, but I will always be indebted to BU.”

Eichel won this year’s Hobey Baker Award, the highest individual honor given to an NCAA hockey player, and was instrumental in a turnaround season that saw the Terriers advance to the NCAA Frozen Four before losing to Providence in the final game.

Sabres general manager Tim Murray previously told the press that drafting the 18-year-old Eichel was the easiest decision of his career, one that could potentially transform the Sabres, who finished last in the NHL this year. “This is a big step for us in terms of becoming big boys in the league,” Murray said.

Eichel, who hails from Chelmsford, Mass., led the nation in points (71) and assists (45) and drove the Terriers to the Hockey East regular season and tournament titles and the 2015 Beanpot title—BU’s 30th, the most of the four competing schools. The Terriers finished the season 28-8-5. In addition, Eichel was the 2015 Hockey East scoring champion, Rookie of the Year, and Player of the Year, as well as just the second freshman ever to win the Hobey Baker.

On Friday night, Eichel became the 11th Terrier in program history to be an NHL first-round draft pick. Three other BU players were also drafted: forward A. J. Greer (CGS’16), who went 39th to the Colorado Avalanche; incoming freshman Jakob Forsbacka Karlsson, who went 45th to the Boston Bruins; and Jordan Greenway, also an incoming freshman, who went 50th to the Minnesota Wild. BU was the only school with four players selected in the top 50. Last season, 40 former Terriers played hockey at the professional level.

Terrier head coach David Quinn (CAS’89) had kind parting words for Eichel, who set the BU record for points by a freshman. “My staff and I would like to congratulate Jack on taking another step towards his ultimate goal of playing in the National Hockey League,” Quinn said yesterday. “Despite playing here for just one year, his contributions both on and off the ice were immeasurable. We wish him and his family the best of luck.”

Jack Eichel to Play Next Season for Buffalo Sabres