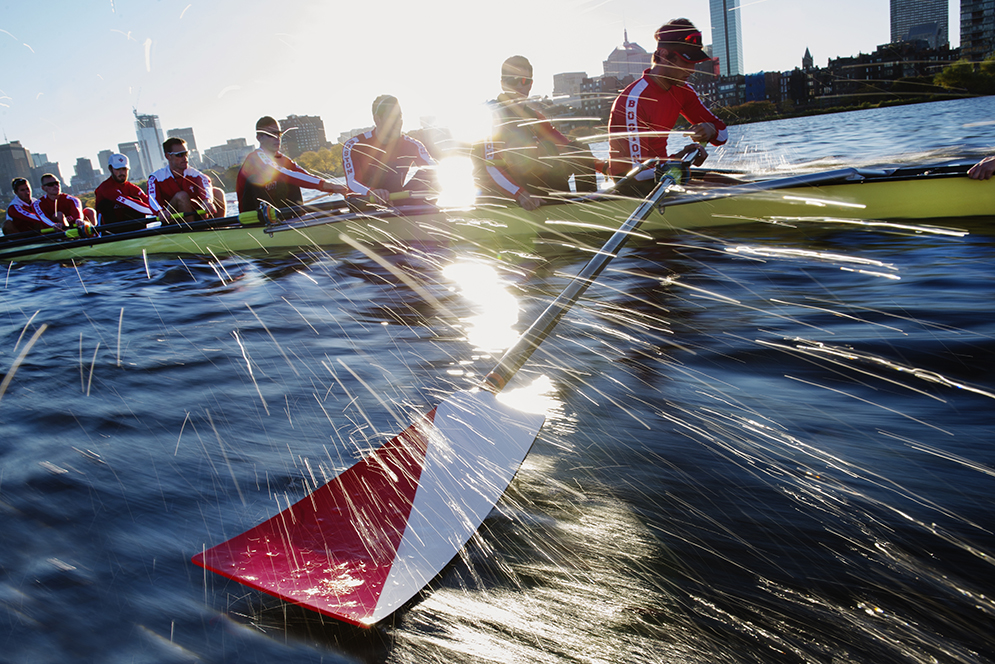 The BU men’s rowers enter this weekend’s Head of the Charles regatta following a strong season last year that saw them win bronze at the IRA National Championship Regatta. Photo by Jackie Ricciardi

More than 9,000 rowers from around the world will put their shells into the Charles River for the annual two-day Head of the Charles regatta, the world’s largest rowing event. And in the thick of it all will be the BU men’s and women’s rowing teams, who will compete in 8 of the 55 scheduled races. The regatta kicks off Saturday morning at 8 a.m. with BU’s DeWolfe Boathouse once again the official starting line.

The Terriers hope to build upon last year’s success, when the men’s and women’s rowing teams combined for 6 top-10 finishes.

On the men’s side, the Terriers will have five boats racing: three in the club eight and two in the championship eight.

“We did a lot of good things last year,” says men’s rowing head coach and two-time Olympic medalist Tom Bohrer. “We have to keep those things up and improve. Every year, we aim to be among the best. Last year, we were, and hopefully we can do even better this year.”

During last year’s Head of the Charles, the first varsity eight finished eighth overall, fourth fastest among collegiate crews. The results put BU in an elite group, as one of the best collegiate crews in the country. The men’s rowing team comes into the Head of the Charles after a strong campaign that saw them finish undefeated in cup racing this past spring and win bronze in the 2V at the IRA National Championship Regatta, the nation’s oldest collegiate rowing championship, in June.

“We know how good we can be,” says Matt Maginnis (Questrom’16), captain of the men’s team. “We have a lot of returning guys and we know the course really well. We did pretty well last year, but I really like our chances even more this year. We’ve prepared a lot, and I think this race is coming at a really good time for us. Hopefully, we can go out there and execute.”

Bohrer, a 2010 National Rowing Hall of Fame inductee, understands that a good showing this weekend will require a total team effort. “It doesn’t just come down to one guy,” says Bohrer. “Everyone has to do their part. We’ve seen some of these races come down to tenths of a second. It has to be as close to perfect as possible—team-wise—or you won’t get the results you want. No one player is going to make that happen; it takes everyone being at their best.”

On the women’s side, the openweight program will send out four boats this weekend: one each in the club four, the club eight, the championship four, and the championship eight. Last year, the club four team finished 5th in a field of 61 boats, while the varsity eight boat did not fare as well, finishing 25th out of 34. Stacey Rippetoe, director and head coach of women’s rowing, is confident the women will perform well this year.

“We have a lot of older players this year,” Rippetoe says. “I think that experience will really help us. We’re looking for better results every year. We know the competition will be tough, but we really feel confident about this year’s teams.”

The BU women’s rowing team enters the Head of the Charles after a strong 2014–2015 season. The BU openweights claimed two bronze medal victories at the Patriot League Championships in May and had a fourth place team finish, while the BU lightweights won two bronze medals at the IRA National Championship Regatta a month later, with all three BU boats finishing in the top four.

With more than 400,00 spectators expected to line the banks of the Charles River over the weekend, finding an optimal viewing spot is key. Two of the best places to catch the race are the Anderson Memorial Bridge (also known as the Larz Anderson Bridge) and the John W. Weeks Bridge, as they are the informal halfway points of the regatta. (See the map below for more information about the best places to view the race.)

“It’s such an exiting time of year,” says Maginnis. “So many people are coming out, from our coaches to alumni to us. It’s crazy how many athletes actually come out. To be able to compete in this for the fourth time—it’s really remarkable.”

“Everyone looks forward to the Head of the Charles,” says Emily Avrick (Questrom’17), captain of the women’s openweight team. “It’s literally the biggest race of the year. It’s a fun and exciting time. How many times do you really get to compete in one of the biggest races in the world? We just have to enjoy the opportunity while we have it.”

To view the best locations for watching the Head of the Charles, hover over the mile markers in the map above.

The awards ceremonies are held at the Rowing and Fitness Expo in Christian Herter Park on Saturday at 4:30 and 6 p.m. and on Sunday at 3 and 5 p.m.

Note that Memorial Drive in Cambridge will be closed from the Cambridge Boat Club to Western Avenue from 8 a.m. to 7 p.m. both Saturday and Sunday.

View a live webcast of the regatta here.

BU Heads to the Head of the Charles

BU Heads to the Head of the Charles
0
share this