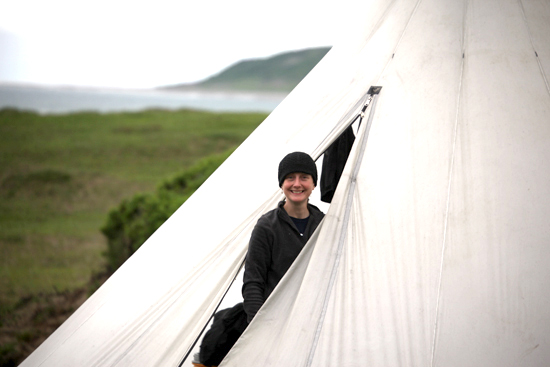 Catherine West made the breathtaking ruggedness of the Gulf of Alaska her climate change workshop last summer in part because of the feral cows.

That’s right. Wild cattle, the descendants of domestic bovines introduced by American ranchers in the 19th century, have devastated the environment on Chirikof Island in the Kodiak Archipelago, devouring most of the vegetation and trampling archaeological sites. The US Fish and Wildlife Service asked West, a College of Arts & Sciences research assistant professor of archaeology, to study the archaeological record (before the cows obliterate it) for some clue to the island’s pristine state—including the climate.

To learn about that, she studies what would seem utterly off-topic: what people had to eat. Bones and shells left over from the meat and fish that inhabitants ate centuries and millennia ago have built up in garbage pits or on the ground. The Gulf of Alaska has been a churning cauldron of climate change, alternating between periods of cold and heat, according to West, and what people ate can be an indicator of the climate in which they lived.

She tries to corroborate her data with climate-related information collected by other scientists who study things from glaciers’ advances and declines to vegetation changes. BU Today spoke to West about her work.

BU Today: What do ancient meat consumption and changes over time tell you about climate change?

West: I assume these ancient people were selecting foods based on what is available. They hunted whale, porpoise, everything you could imagine. One of the things that might have affected what they chose to hunt is the climate. If the climate changes, fish that don’t want to be warmer or colder will swim away and recolonize somewhere else. Birds won’t come and nest if the climate conditions aren’t right. Whales might migrate in a different pattern to follow the plankton or whatever they eat. The warmth or coolness of the ocean will affect, for instance, how well salmon spawn from year to year. Those bigger climate changes also affect the ocean conditions. Then people will harvest what they can. If it was not available, I won’t see it in the archaeological record; if it was available, I will see it.

If you’re studying ancient remains, why is this island fertile ground?

The far north is experiencing climate change more obviously and faster than other places in the world. Kodiak is actually a temperate place; it’s not as cold as farther north in Alaska, where they’re experiencing loss of sea ice and warm weather birds, like robins, coming to roost where they’ve never been seen before. But the Gulf of Alaska economy relies on fishing and the natural environment. People in that region are very concerned about what will happen to that environment if climate changes. Being in a place where the environment is so important helps me connect the past to the present in a more profound way than I could do in other places.

I’m concerned with understanding how people and animals adapted to those changes in the past, and what we can learn to adapt in the future. What did people do in a small subsistence community 3,000 years ago or 200 years ago to adapt to that change, and what might a small subsistence community do today to learn from their ancestors to adapt their own approaches to fishing now in the face of massive climate change?

We always think of these small groups as vulnerable to changes in climate. But I think the people living in this region were extremely resilient. They lived in such a volatile environment—volcanoes, earthquakes, extreme winter storms, starvation periods—and yet they thrived. What can we learn about that resiliency and apply to our own adaptations?

How can we be sure that changes in meat consumption had to do with climate?

How do I know what was happening in the past? I don’t always. So one of the ways I try to test this is I look to the ancient environment. I can use the chemical composition of animals in the archaeological record, which records environmental variables in their bones or shell. I can do chemical analyses to tell me what the temperature of the ocean was when that animal was living. I can look in the rings of that shell and sample the oxygen content and say, when it was a year old, it was colder; when it was two years old, it was warmer. The limitation of that is it’s a narrow focus of where it was living, so I analyze a lot of shells from all around.

Does your research leave you hopeful we’ll be able to adapt?

It does. Some concepts are vague—how we might translate from a tiny group of hunter-gatherers to a huge industrial society like we live in today. The reason I started this project with feral cattle is that this is tangible. I can see a very clear effect of human action on the landscape. I can look at what happened before that introduction, and inform a resource manager about how they might manage that landscape back to a healthy place.

What Ancient Dinners Tell Us about Climate Change

What Ancient Dinners Tell Us about Climate Change
0
share this