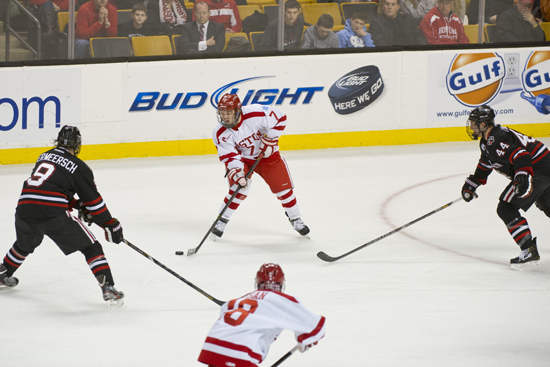 Cason Hohmann (CAS’15) (top) is tied for second in goals on the men’s ice hockey team, with seven this season. Photo by Andy Costello

When the men’s hockey Terriers skate onto the TD Garden ice tonight in this year’s Beanpot Tournament semifinals, they will be clear underdogs. Their record in the first season under head coach David Quinn, 8-14-3 overall, 3-8-2 Hockey East, has been disappointing thus far. What’s more, in facing off against archrival BC, the Terriers take on a team that has not only captured the last four Beanpot titles, but is currently ranked second in USA Today’s national polls.

“We’ve struggled lately,” says Quinn (CAS’89), “so winning the Beanpot would mean a lot for a variety of reasons. It would give our team a big psychological lift, allow our players to feel good about themselves, and in the bigger picture, it would mean BU is getting back to our winning ways.”

The men’s Beanpot Tournament, which pits the Harvard, Northeastern, Boston College, and BU hockey teams against one another, has been a Boston-area classic for decades, giving sports fans some welcome mid-winter excitement. Winning the 2014 tournament would give the Terriers their 30th Beanpot title (they last won the tournament in 2009).

“It’s obviously huge,” says forward Cason Hohmann (SMG’15). “We look forward to this game every year, especially when we take on BC. They have the best first line in the country, but if we play well as a team and turn it into a gritty game that gets them frustrated, we have a chance to beat them.”

The Eagles defeated the Terriers 5-1 at Agganis Arena earlier this season, but in their second meeting, in mid January, BU played them much tougher, fighting back from an early three-goal deficit to nearly tie it up. But the game ended with a 6-4 loss on Eagles turf. When the teams meet tonight on a neutral site in front of thousands of Boston-area hockey fans and a national TV audience, anything could happen.

A battle between two teams at opposite ends of the Hockey East standings seems like a mismatch on paper, yet as Quinn notes, the fact that it’s the Beanpot changes everything. “Obviously we’ll be a decided underdog, but we played them tough in their own building and every team tends to elevate their play come Beanpot time,” the first-year Terrier coach says.

Forward Danny O’Regan (SMG’16), who grew up in nearby Needham, Mass., can attest to the tournament’s special atmosphere. “I went to a lot of games at Walter Brown Arena as a kid,” he recalls, “but the Beanpot is a different story. Playing in front of a packed house at the Garden is something really special, and the opportunity to participate in this type of game is definitely part of what motivated me to come here and play.”

“The environment itself is what makes this game special,” Quinn says. “Boston is primarily a pro sports town, but this tournament really means a lot to the city and the fans of these four colleges. I have no doubt that we’ll be ready to play.”

In another version of the Terriers-Eagles rivalry, tomorrow night BU’s icewomen travel to Chestnut Hill to take on BC in the semifinals of the women’s Beanpot Tournament. Last season, the women’s hockey Terriers earned their second straight Hockey East title and made it all the way to the NCAA tournament finals, where they fell 6-3 to an undefeated Minnesota team. BU carried that momentum into the current season, beginning 9-1 in conference play. However, the team is  currently 18-8-1 overall and 11–5-0 Hockey East.  Boston College defeated BU 4-1 in their sole meeting this season, but the Terriers are hoping for a better result against an Eagles squad ranked seventh in USA Today’s national polls.

Much is at stake. If BU captures the Beanpot title, it will be the first since becoming a Division I varsity team nine years ago. A tournament win wouldn’t give BU just bragging rights, says head coach Brian Durocher (SED’78), but a powerful incentive for the remainder of the season.

“In the final months of the season you want to know how well you’re playing,” Durocher says. “Two wins against quality teams would provide a shot in the arm for this club and it would be a tangible accomplishment, but we just want to make sure we’re getting better, and this tournament will be an important barometer in that regard.”

For assistant captain Kaleigh Fratkin (COM’14), this year’s tournament is a bittersweet moment. She’s playing in her fourth and final Beanpot, so she understands the significance of the tournament. “One thing we tell the freshmen every year is that the Beanpot is a preview for the playoffs,” she says. “We’re in a bit of a slump right now, so I think this is a perfect opportunity to get back to the team we were the first half of the season and regain some momentum.”

Winning a Beanpot is one of the only accomplishments (they’ve made it to the Frozen Four twice, only to have their hoped dashed both times) that have eluded this senior class, and Fratkin says they are eager to change that. “Every year, the senior class has talked about how we want to be a part of the team that breaks the Beanpot streak, yet every year we’ve fallen just short.”

“We’ve had some great teams that were plenty capable of winning this thing,” Durocher adds, “but a few bounces went the wrong way and that cost us. No question the kids will have energy, excitement, and some extra motivation to win Tuesday night because we’ve had some close losses to BC and have yet to win the Beanpot.”

To give his players even more incentive, Durocher has promised to lace up his own pads for a practice if they win the tournament. “That should definitely provide some extra motivation,” Fratkin says, “but more than anything, we’ll be playing for school pride, and I think we have a really good chance to win.”

The BU men’s hockey team takes on the Boston College Eagles in the first round of the 62nd annual Beanpot Tournament tonight, Monday, February 3, at 8 p.m. at the TD Garden, Boston. Harvard and Northeastern play the other semifinal game at 5 p.m. Ticket prices and information can be found here. The games will be televised on NESN.

The BU women’s ice hockey team faces Boston College tomorrow, Tuesday, February 4, at 8 p.m. at BC’s Kelley Rink at Conte Forum, Beacon Street, Chestnut Hill, in the first round of the 36th annual Beanpot Tournament. Harvard and Northeastern play the other semifinal game at 5 p.m. Ticket prices and information can be found here. The game will be streamed live online on Eagle Vision All Access.

There are 2 comments on Terriers Head to Beanpot Tournament