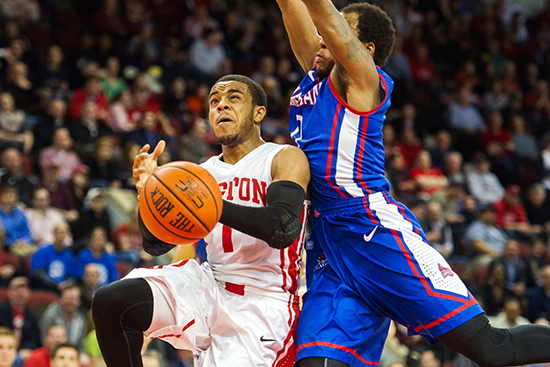 In last night’s heartbreaker at Agganis Arena, the men’s basketball Terriers ended their first season in the Patriot League without a title. The Terriers had high hopes going into the game, having won 9 of their last 10 contests, but were unable to overcome a slow start and fell to American University 55-36.

BU entered the conference tournament as the number one seed and advanced to the finals by beating Lafayette 91-54 in the quarterfinals and vanquishing Army 91-70 in the semifinals. After finishing second in the regular season standings, American bested Colgate and Holy Cross on their way to a finals matchup with the Terriers. The teams split their two regular season games, with the home team earning the victory in each meeting, but the Eagles triumphed in Wednesday’s final.

After his players missed five of their first six field goal attempts, head coach Joe Jones exhorted them to slow down, and he brought Travis Robinson (SMG’14) off the bench. The calming presence of the senior forward guided BU into the flow of the game; Robinson found Justin Alston (CGS’14) for an easy layup and knocked down a three on the following possession.

Defensive pressure kept the Terriers in the game as they trailed 24-16 heading into the break. The highlight of the first half came when Maurice Watson, Jr. (CGS’14) prevented a sure layup by stripping American senior Tony Wroblicky, then taking the ball coast to coast for a basket and the foul.

Still, the game did not go the Terriers’ way. D. J. Irving (MET’14) walked onto the court averaging a team-high 18.5 points a game in the conference tournament, but missed all five of his shots from the field and went scoreless in the first half. John Papale (CGS’14) made 2.1 three-pointers per game this season, but missed all of his three attempts from long range as the Terriers ended the contest with a season-low 36 points.

Wroblicky, the Patriot League Defensive Player of the Year, was trouble for the Terriers all night. He scored over the top of power forward Dom Morris (MET’14) and blocked three shots. Senior guard Darius Gardner bolstered the offense for American and finished with 18 points on 7 of 8 shooting from the field.

BU was paced by Morris, who poured in 10 points and snagged 8 rebounds, while Watson followed up his record-setting performance in the semifinals with 11 points and 5 assists.

As the Patriot League regular season champions, the Terriers will continue in the postseason with an automatic bid to the National Invitation Tournament, and their first round opponent will be announced on Sunday.

The BU men’s basketball team will receive an automatic bid to the National Invitation Tournament. The Terriers’ first round opponent, bracket, and seed will be announced during the Selection Sunday special on ESPNU, which will begin at 8:30 p.m. on March 16.