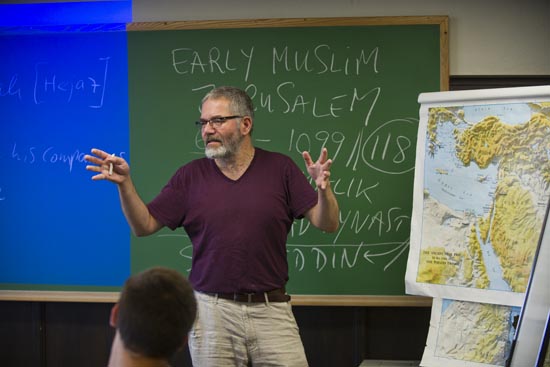 From accounts carved in stone thousands of years ago to today’s New York Times, Jerusalem has always been headline-worthy. It is a beautiful, vibrant, modern metropolis where every ancient byway tells a story of faith, siege, prosperity, and grief. To study Jerusalem—its tumultuous history, dramatic architecture, politics, power struggles, commerce, and shifting population –is to gain an invaluable understanding of three of the world’s major religions and the global impact and legacy of their long long-simmering conflicts and periodic alliances. In the College of Arts & Science summer course Holy City: Jerusalem in Time, Space, and the Imagination, taught by Michael Zank, a CAS professor of religion and director of the Elie Wiesel Center for Judaic Studies, students from diverse backgrounds gather around a table for two and a half hours twice a week to discuss and debate everything from the city’s urban landscape and development to the biases reflected in Jerusalem-related mass communication, scholarship, and religious texts.

Jerusalem, home of the iconic Church of the Holy Sepulchre, the Western Wall, and the Al Aqsa mosque, embodies three of the most influential world religions—their “sacred place and sacred time,” as Zank puts it, as well as the notion of “city branding,” a modern phrase for centuries of Jerusalem’s marketing of its “holiness.” Judaism’s origins date back to roughly two thousand years before the birth of Jesus. A group of Jews, followers of Jesus, became the first Christians several decades after his birth, and Islam, drawing on Judeo-Christian and Bedouin beliefs and values, arose about seven centuries later in the desert settlement of Mecca.

For those who have never visited Jerusalem but plan to, or those for whom the place looms large in their imaginations and their beliefs, the course invites them to comprehend the only place on earth where Easter pilgrims reenacting the Stations of the Cross weave past Muslims kneeling toward Mecca and Jewish men with forelocks donning prayer shawls, their heads bedecked with the small scroll boxes known as tfillin.

The 19th-century British Prime Minister Benjamin Disraeli famously remarked that the history of Jerusalem is “the history of the world.” One can grow dizzy riding the scholarly roller coaster of Jerusalem’s long history, which dates back 4,500 years to the early Bronze Age. The patriarchal period, the exilic period, the Persian period, the sanctuaries at Bethel and Dan, the many claims on the region known as Samaria, the Kingdom of Israel’s ancient capital between the Mediterranean and the Dead Sea; the claims to the land by Egyptians, Assyrians, Babylonians, Greeks, Romans, and British—the chapters reel past. Sixteen wars have been fought over Jerusalem, which has, according to popular sources, been destroyed twice, besieged 23 times, attacked 52 times, and captured and recaptured 44 times.

But Zank’s course is more about comprehension, analysis, and context than it is about rote learning of events forever mired in scholarly debate. Zank himself has “never verified” the above statistics, which “can probably be matched by many other ancient cities,” he says. “Far more significant to me is that the city was intentionally destroyed only twice, both times as a punitive action against irredentist Jewish regimes trying to defy the empires, and that it was otherwise carefully maintained by a great variety of empires that claimed it as a holy city, which in turn conferred legitimacy upon those empires, including Byzantine Roman, Sassanid Persian, Muslim Arab, Catholic Latin, Egyptian (Fatimid, Ayyubid, Mamluk), Ottoman, and British.” An expert in German-Jewish intellectual history, Zank is currently writing a book on why Jews, Christians, and Muslims care so deeply about Jerusalem. He also blogs about Jerusalem-related matters.

Zank’s course tracks the transformation of an ordinary ancient city into the holy city of the three religions that share Abraham as their biblical patriarch—Judaism, Islam, and Christianity—and examines how modern Jerusalem has been shaped by British rule, Zionism, and Palestinian nationalism. It’s impossible in a semester, or even a lifetime, to learn everything there is to know about the city, but using both secular and religious lenses, Zank constructs a vivid mosaic of a city that has been written about, he says, more than any other in the world.

The students in the summer course come from the School of Engineering, the College of Communication, and the School of Management as well as CAS, and include a Muslim student from Dubai, a half-Jewish student from Venezuela, and a retired Jewish man from Brookline. “As a Muslim, I thought it would be good to have a holistic understanding of Jerusalem,” says Asma Bashir (CAS’14), a psychology major. Her classmate, Evergreen student Jordan Krason (CAS’68), who has visited Israel several times, was drawn to the class to learn about one of world’s major “hotspots.” Shaha Alfehaid (COM’17) says she wanted to understand the interplay of the Holy City’s three major religions.

This particular day, the class is focusing on the so-called Judahite monarchy, which was centered in Jerusalem and spanned 1000 to 586 BCE. The students have read the period’s history before class, but Zank breathes life into the facts; imagine, he says, the Israelites’ rise to prominence after the destruction of their original tribes. “The city expands westward and is fortified,” says Zank. “Its population swells ten- to twelve-fold.” And during the Assyrians’ siege in 701 BCE of the fortified cities of Judah, the only city that survives the onslaught is Jerusalem. “It’s the beginning of the notion that the city is special,” Zank notes. “It is now the chosen city, and there was a huge prophetic effort”—today we’d probably call it branding—“to promote that idea.”

Like that of his colleague Elie Wiesel, BU professor emeritus and 1986 winner of the Nobel Peace Prize, Zank’s teaching style is often Talmudic—resembling an ongoing, illuminating argument. He points out that in the Books of Exodus and Deuteronomy, God revealed the Ten Commandments to the prophet Moses on Mt. Sinai, but the legal adoption of the Commandments came much later, during a period of radical reform that followed the implosion of the Assyrian empire. The Torah’s edict to banish idol worship “was something Israelites should have done from the beginning of their existence in the Promised Land.” Yet it took centuries to become law, Zank explains. “Where,” he asks, “was the Torah all this time? Nobody seemed to know this text.”

The assumption is that if you follow these laws, Jerusalem will be indestructible. But if you don’t follow the laws meticulously, it will be destroyed. And, notes Zank, Jerusalem was destroyed one generation later. “What,” he asks the class, “do you think of that assumption?” Bashir, the psychology major, comments on the notion of the sins of the fathers being visited on the sons. “It’s still a very common logic,” says Zank. “Whenever you experience something bad, you haven’t followed the commandments properly. Or you’re being punished for something your parents did.”

Zank’s banter is playful and provocative as he implores the students to put themselves in the mindsets of the conquerors and the conquered. The course is about the history of Jerusalem, yes, but he’s emphatic that it is also about “preparing students to handle some of the complexities of thinking about and analyzing information” on a conflict that continues to rage in today’s headlines.
In the case of the Jewish diaspora in Babylonia, Zank cites Psalm 137, By the Rivers of Babylon:

By the rivers of Babylon we sat and wept
when we remembered Zion…
How can we sing the songs of the Lord
while in a foreign land?
If I forget you, Jerusalem,
may my right hand forget its skill.
May my tongue cling to the roof of my mouth
if I do not remember you,
if I do not consider Jerusalem
my highest joy.

The psalm famously concludes with a bitter call for revenge: “Happy is the one who seizes your infants and dashes them against the rocks.” These, says Zank, who appears to know most of the Old Testament by heart, “were not meek people.” But all three religions teach forgiveness as well as repentance, he says, noting that after the second destruction of Jerusalem in 586 BCE, during decades of exile, the Israelites underwent “an intense period of reflection.” Like the Christians and Muslims who followed, they believed in a God of Israel who, for their own good, “moves the people of his faith around like a big chess player,” says Zank. “That things happen for a reason is one of the most commonly believed notions among Muslims, Christians, and Jews. The evidence,” he says, is in the text. “This God cares, and there is only one God.”

Before Zank goes on to speak of the Persian period, the demise of prophets, the institutionalization of the Torah, and the rise of laws (“In a royal city you need prophets and in a temple city you need law”), Zank asks the students if they’d like to take a break. The students answer in unison that they don’t need one. “They never take a break,” says Zank. “This is a very strange class.”

Jerusalem: How Did It Get to Be the Holy City?

There are 6 comments on Jerusalem: How Did It Get to Be the Holy City?

Jerusalem: How Did It Get to Be the Holy City?
One Class, One Day
6
share this