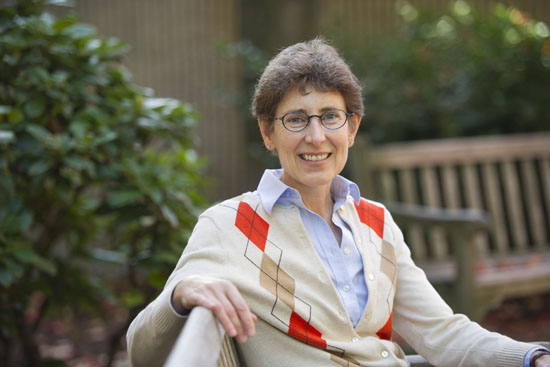 Alice White, the new chair of the ENG mechanical engineering department, comes to BU from a 30-year career at Bell Labs, where she was chief scientist. Photos by Cydney Scott

Reflecting on the near-absence of engineering classes in public schools, Alice White recalls a recent conversation with a new neighbor, a kindergarten teacher who won a presidential award for teaching science. “I mentioned that I was joining the College of Engineering at BU,” says White, the new chair of the mechanical engineering department. “And the teacher asked, ‘What’s engineering?’”

A career scientist who is passionate about her field, White proceeded to describe some of the innumerable things engineers do. The teacher realized that many of her lessons, like encouraging her small charges to investigate why some objects sink and some float, are the essence of engineering. From tinkering under car hoods to digging moats for sandcastles, the science of engineering pervades our lives. So why—aside from the sexy field of robotics—does engineering continue to dwell at the monochromatic margins of the scientific and academic lexicon?

“You don’t really hear the word engineering in school unless your parents happen to be engineers,” says White, who comes to BU after three decades at communications research giant Bell Labs, where she rose from postdoctoral fellow to chief scientist. “Engineering is just not part of the vocabulary and is absent from the curricula of regular high schools,” she says. She wove awareness about the subject into the lexicons of her two grown daughters. White is an expert on photonic device technology, among many other subjects, so it’s especially fitting that part of her BU mission is to shine a light on engineering itself.

Although White “ran away from” academia at the start of her career, she says, she’s excited about launching a new chapter at BU. “Here I’m surrounded by youth, and they are so energetic and enthusiastic,” one of many contrasts to working in industry. Her first order of business is a search for new faculty, but she is also setting up her own lab for basic research, a major shift from her years of applied research at Bell, where data were presented on a quarterly basis. “It’s really great to be part of something that is growing and moving up,” says White, who has a doctorate in physics from Harvard University.

“Dr. White is the consummate interdisciplinary scientist, with an extraordinary record of high-impact research and innovation while leading one of the world’s most prestigious corporate research laboratories,” says Kenneth R. Lutchen, dean of ENG. “These skills translate excitingly for our mechanical engineering department. Moreover, almost all these areas intersect with strengths in other departments throughout the college.”

Not only is White impressed with BU engineering faculty, students, and interdisciplinary activities, but also by the dean’s vision of educating socially conscious, entrepreneurial “societal engineers,” she says.  The best engineers are “creative people—curious, interesting, and interested, and I think it spills into many other areas,” she says, commending the dean’s realization that “one way of making engineering interesting today is to make the connection between engineers and their impact on society. He has a great vision for the school.”

White’s positions at Bell Labs included director of integrated photonics research, vice president of the Physical Technologies Research Center, and president of the New Jersey Nanotechnology Consortium. In tandem with her leadership roles, she was active in efforts to improve K-12 science education by advancing Bell’s participation in science fairs, and spearheading employee-led youth robotics teams. “I always enjoyed mentoring students,” she says. The author of more than 135 publications, White holds five patents and has broad expertise in telecommunications-related areas, among them materials science, semiconductor processing, and nanofabrication. One of her major achievements is the invention of mesotaxy, a technique in which a crystalline metal layer is grown inside a silicon wafer by bombarding it with metal ions. If created on a large scale, the layers could lead to application in a new generation of electrical circuit components. But not all her scientific pursuits require an advanced degree to comprehend: when her children were in elementary school, she developed a portable kit to demonstrate the principles of optics to children. It’s still used today.

Although international students are flocking to engineering (nearly half of the college’s graduate students are from outside the United States), White is troubled by the field’s lack of appeal to young Americans. “It’s almost a crisis,” she says, one that’s escalating even as engineering jobs beckon, demanding at least 20 percent more trained engineers, according to the federal Bureau of Labor Statistics. In a 2012 Forbes magazine report on the 15 most valuable college majors, 5 engineering fields were represented. And engineering leaders like White are devoting considerable energy to attracting more women and minorities to the field. According to the Society of Women Engineers, women accounted for a dismal .4 percent of undergraduate engineering degrees in 1966. Nearly half a century later, that percentage hovers at just 20 percent. Minority representation is of even greater concern, White says. A widely cited 2007 National Science Foundation study found, for example, that African Americans accounted for only 6 percent of the nation’s engineering graduates. White has reached out to Gretchen Fougere, ENG assistant dean for outreach and diversity, to discuss efforts to broaden enrollment, and she hopes to play a role in BU’s Women in Science and Engineering, which is aimed at increasing the representation and success of women at every educational level.

White is just settling into her Cummington Street office, which she plans to decorate with the work of her older daughter, a visual artist whose prints—one an abstraction of neurons—are inspired by science. It’s a passion the whole family shares—White’s husband is a freelance science writer.

BU’s first woman chair of mechanical engineering began her career at a time when women with advanced degrees in physics or chemistry often took jobs as schoolteachers, because, she says, “there was no pipeline” for women to enter industry. Bell Labs provided that pipeline, for minorities as well as women. “They had a real commitment to diversity,” she says. For a time, she was the only woman physicist among nearly 1,000 staff scientists. “Maybe it was a little harder to get credibility with them, but once they realized I had skills—such as nanotechnology and nanofabrication—that they didn’t, they were just great,” she says.

At BU, White says, she’s eager to “encourage collaboration by being collaborative myself.” She’s particularly excited about interdepartmental and intercampus collaborations in biomedicine, biomechanics, and robotics, which bring together electrical engineers, mechanical engineers, and systems engineers. For her, moving from an environment focused on “getting things done and getting them out there” to one giving her the opportunity to have her own lab to explore more fundamental problems is a gift. Over the years she has been nursing “a huge number of those problems, just begging to be looked at.” And, she says, she’s looking forward to doing something “fun and new.” As for young people who assume the words “engineering” and “fun” are mutually exclusive, White is ready and willing to set them straight.

From Bell Labs to BU, with a Passion for Engineering

There are 3 comments on From Bell Labs to BU, with a Passion for Engineering

From Bell Labs to BU, with a Passion for Engineering
3
share this