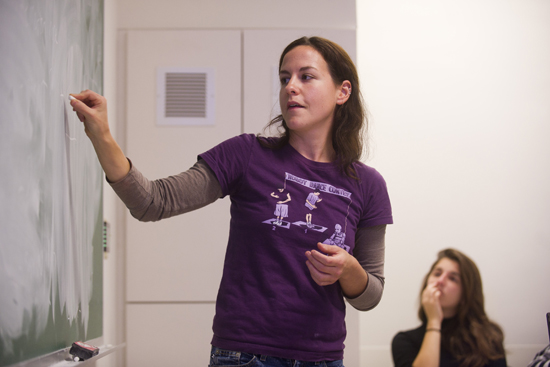 Quick: Who invented the iPad? If you said Apple, you flunk, having picked a latecomer to the touch-screen party. The iPad’s true visionary: Star Trek.

Back during the Reagan administration, Captain Picard let his fingers do the data-retrieving on a device that anticipated today’s iPad as he helmed Star Trek: The Next Generation. That TV show continued a timeless tradition of science fiction anticipating science fact. The original 1960s Star Trek had those wireless communicators that look an awful lot like cell phones. And long before the advent of the boob tube, writers like Jules Verne and H. G. Wells variously imagined helicopters, submarines, space flight, and tanks before they were reality. So what does sci-fi spy in our tech future?

Robots, of course, although different artists diverge as to whether mechanized people are boon or bane, as a recent visit to Joelle Renstrom’s Evolution of Science Fiction class demonstrated. The College of Arts & Sciences lecturer teaches the writing seminar this semester to 40 students in two sections, many of them tech-enthusiasts from the College of Engineering craving a glimpse into the techno-future. (One rides to class on a motorized scooter he cannibalized from a Razor handle and electronic parts.) 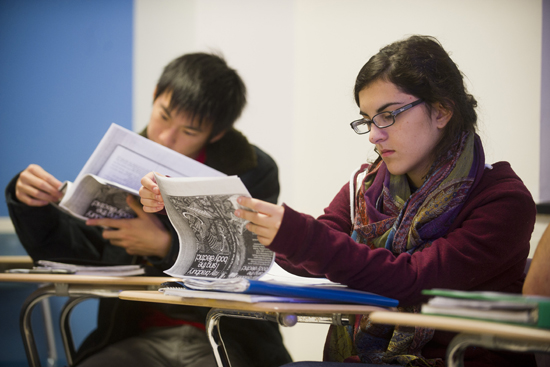 On the day we visited, the class was analyzing the Ray Bradbury short story I Sing the Body Electric, in which a little girl, grieving her mother’s death, initially rejects a robot grandma meant as a replacement, but comes to love the robot after it demonstrates that it cannot die. Renstrom was focusing her charges’ attention on the man-versus-machine dichotomy, on whether the little girl and her siblings exchange real love with their grandmotherly gizmo.

“Does anyone doubt that the kids feel emotion for her? They feel something like love from her,” she insisted. Some students debated whether love that’s artificially programmed is the same as organic human love, prompting Renstrom to ask, “Does Robot Grandma have a soul?…Soul can be kind of a religious thing, but let’s think of it as something that’s essential, that we humans have that separates us from machines.”

One student was troubled by technology’s seeming infallibility: “These computers right now, they lack imperfection.”

“Yeah,” replied Renstrom. “Robot Grandma—does she have any flaws? She’s pretty perfect.” I Sing the Body Electric, she suggests, may be Bradbury’s retort to Walt Whitman, who wrote the poem celebrating the human body from which Bradbury took his title—“Oh yeah, Walt? Well, check out this vessel for the soul.”

“Engineers are sometimes seen as nerdy, I guess, but I like the science part of the class,” says Cameron Mahoney (ENG’15). “We get to talk about technology that’s maybe possible, but not yet. Or that writers thought might be possible when it was written, and now it is. And we can see how technology has progressed through time.” 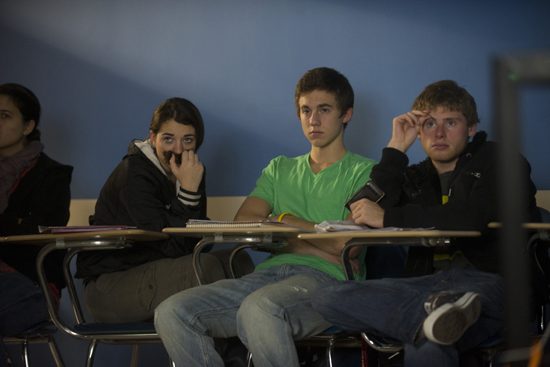 But you needn’t be nerdy to apply to this class. Renstrom, who blogs about science fiction, holds degrees from the University of Michigan, in English, and the University of British Columbia, in creative writing. Readings include such science-light classics as excerpts from Mary Shelley’s Frankenstein. Class member Jacqueline MacDonald (CAS’15) plans to major in religion, yet says she took the class out of a longtime enthrallment with the literary, “story aspect” of sci-fi. Suspending disbelief while reading far-out premises might impede some readers, but not MacDonald: “I think religion ties more into fantasy than science fiction, with all the mythology.”

As a kid, Renstrom, 33, only dabbled in science fiction reading. “I was more a literary snob,” she admits. “I was totally thinking, I’m going to write some great literary novel, it’s going to be very serious, it’s going to make people think and feel and blah blah blah.” Then, when an illness marooned her on her couch one day after college, she took in a Buffy the Vampire Slayer marathon on TV. The show fell in the horror genre, but like science fiction, rested on fantastical premises. It proved to be a eureka moment. “I watched it for 12 hours, and I was like, oh my God, this is compelling storytelling—this is not crap.”

Renstrom’s course offers various reminders of technology’s limits, starting with the syllabus, which warns of consequences should a student’s cell phone go off during discussions: “That person will have to perform a song or dance in front of the class.” And unlike Grandma Robot, real-life technology is imperfect. Prepping for an in-class screening of scenes from the TV show Battlestar Galactica, Renstrom had to briefly interrupt the proceedings with a call for help to the IT folks when the speaker system wouldn’t turn on.

“Isn’t this ironic?” she mused aloud. “Don’t you love technology?”

One Class, One Day: The Evolution of Science Fiction

There are 2 comments on One Class, One Day: The Evolution of Science Fiction