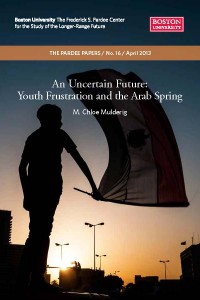 An Uncertain Future: Youth Frustration and the Arab Spring

Many scholars and media analysts have attributed the Arab Spring revolutions of 2011 primarily to the desire for regime change and democracy by citizens in the region. In this paper, M. Chloe Mulderig, a 2011 Pardee Graduate Summer Fellow and Boston University doctoral candidate in anthropology who had done field work in the region, argues that cultural and economic factors preventing youth from obtaining the usual markers along the path to adulthood — quality education, secure employment, marriage and family – played a significant role in the uprisings, and that must be acknowledged. Looking at the situation through an anthropological lens, she maintains that countries that don’t begin to address the issues creating widespread youth frustration face the prospect of long-term continued unrest even as new governments are established.

M. Chloe Mulderig is a doctoral candidate in the Department of Anthropology at Boston University and was a 2011 Pardee Graduate Summer Fellow. Her upcoming dissertation explores the creation of religious identity and hypocrisy among young women in Fes, Morocco. Her current research focuses on issues of youth identity, religious experience, and political authority in both Morocco and the greater Islamic world.