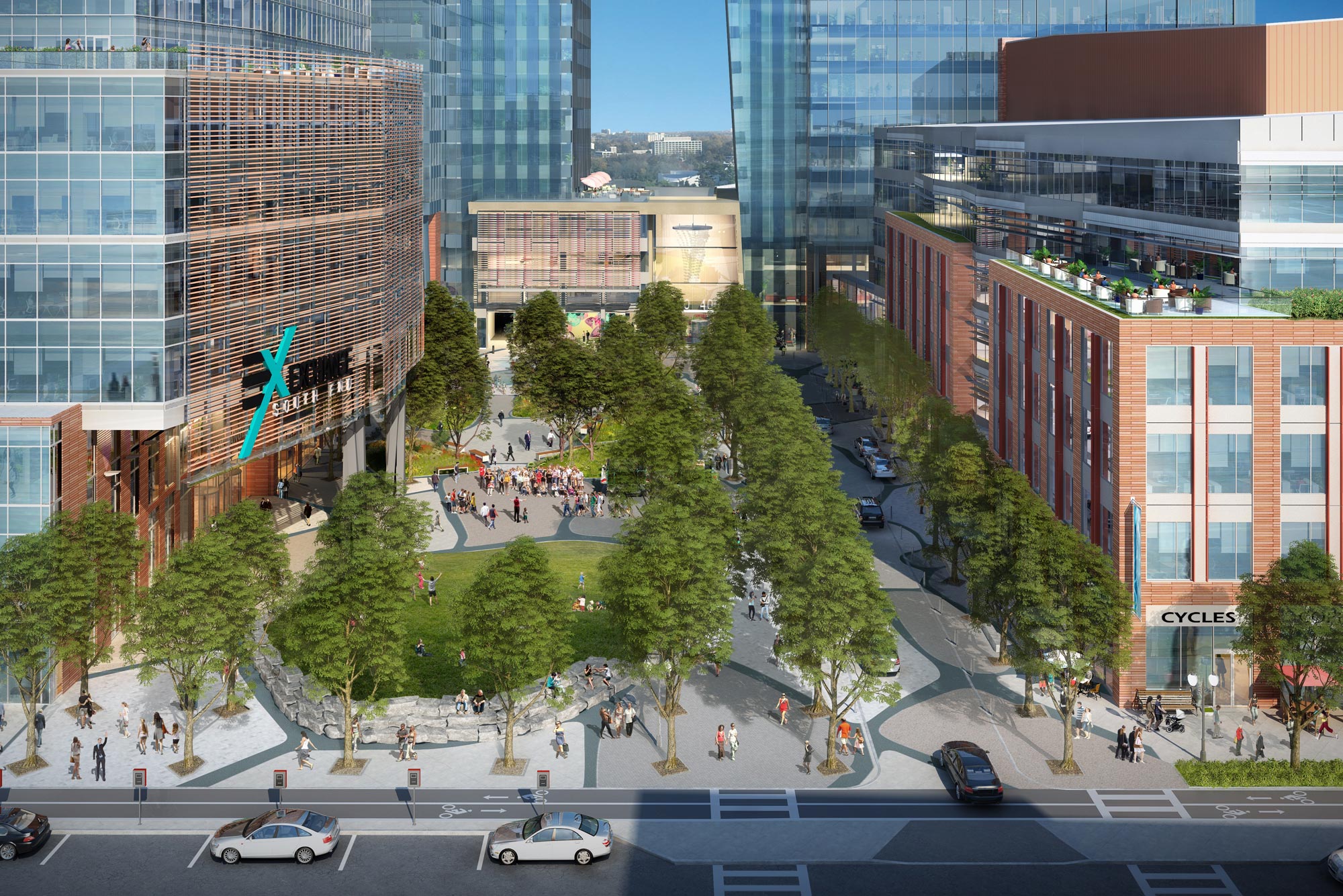 The Exchange South End project will be centered around a one-acre-plus public park and event space known as Albany Green. Rendering courtesy of the Abbey Group

A major construction project being built next door to the Medical Campus will bring new life to Albany Street.

Developer the Abbey Group has broken ground on the $1 billion Exchange South End project, which will include 1.6 million square feet of mixed-use space in four buildings on the 5.6-acre site formerly occupied by the Boston Flower Exchange at 540 Albany St.

Exchange South End will host life sciences and technology companies, as well as retail and restaurants; there will be no residential units. The buildings range from 6 to 23 stories, with the taller ones built on the eastern side of the site, closest to the Southeast Expressway.

“The site was attractive because of the incredible intellectual capital and amazing medical research going on at the BU Medical Campus,” says Audrey Epstein Reny, an Abbey Group managing partner.

The project is privately funded and not connected to the University. Boston-based Abbey Group, founded in 1979, is perhaps best known to the BU community as developer of the Landmark Center near the Fenway Campus.

When completed, the site will center around a one-acre-plus public park and event space known as Albany Green, mixing green space and hardscape, which could host food trucks or outdoor markets. The park will also include a play structure and a water element, Reny says, while restaurants fronting it may have outdoor patios. “It’s meant to be an interactive and engaging space,” she says.

The development will also include a 30,000-square-foot indoor community space; while plans are still taking shape, she says, it is likely to be used by visual or performing arts groups, based on a survey of the community’s interests.

“The Exchange South End development is another important step in adding to the renaissance and vitality of the Albany Street corridor of the South End,” says Michael Donovan, BU vice president for campus planning and operations. “The development of office, retail, and life sciences space by the Abbey Group will complement the research activities taking place at the Medical Campus and serve as an important new cluster for life sciences discovery and innovation.”

There will be 1,145 parking spaces on site, and Abbey Group is also improving infrastructure near the project, in cooperation with the city, to mitigate traffic. This work includes the rebuilding of Albany Street, with three redesigned intersections, wider sidewalks, improved handicapped accessibility, protected bicycle lanes, and a bus rapid transit lane.

The developer is meeting with neighbors as needed, Reny says, and offers a regular email blast to anyone interested in project updates from the Abbey Group. Those interested can sign up at the project website.

“We’re very excited that our project manager is a South End resident, so he is particularly sensitive and tuned into the neighborhood,” Reny says. “He has been living and raising his family here for a long time.”

The site is just northeast of BU’s National Emerging Infectious Diseases Laboratories (NEIDL), and only a short walk from the Henry M. Goldman School of Dental Medicine, the School of Public Health, the School of Medicine, and Boston Medical Center. The first new lunchtime option for Medical Campus employees and students is probably two years away. In the meantime, they may encounter noise, vibrations, and other disruptions typical of any large construction site.

Following the recent demolition of the Flower Market building, the Abbey Group is beginning excavation in preparation for the first phase of construction. In the coming weeks, vibrations may be noticeable as sheathing is placed below ground in preparation for foundation work. Suffolk Construction, the construction manager for the project, will be implementing mitigation steps, including monitoring impacts in nearby buildings, Reny says.

“Given the size of this development and its proximity to the Medical Campus, the University will be in regular and continuous communication with the Abbey Group regarding construction activities,” says Donovan, “so that both the Medical Campus and the developer can effectively plan to mitigate impacts throughout the project.”