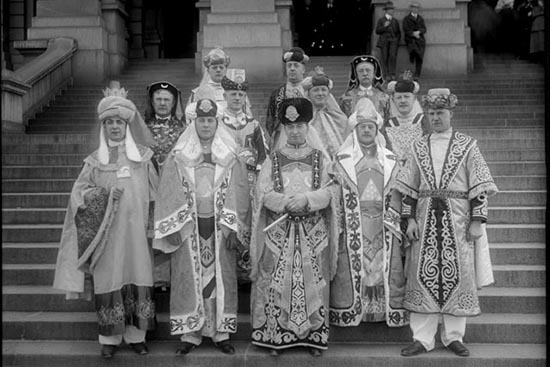 This photo of Shriners in their fraternal attire graces the syllabus of William Moore’s class on fraternal organizations. Photo courtesy of the Denver Public Library

The magnificent innards of Boston’s Grand Lodge of Masons dazzle the eight BU students on a recent visit: the vast meeting halls with their triplicate sets of wooden thrones, upholstered tiers of seating, and central altars with cushioned tops, the exquisitely sculpted ceiling of Corinthian Hall, and the tiny hand-laid Italian tiles on the floors.

Then, in the library, tour guide Walter Hunt, grand historian of the lodge, asks for questions. “I have a quick question,” pipes up Leah Turner (CAS’16). “There’s a document over here with a lock of hair attached to it.”

The hair belonged to a deceased 19th-century Mason and was attached to his membership diploma in a memorial not unusual for that time, Hunt explains. In fact, when loyal Mason George Washington died, the Massachusetts Grand Lodge successfully petitioned Martha Washington for a lock of his hair, now stored in an urn made by Paul Revere (who once served as grand master of the lodge) and brought out whenever a new lodge grand master is installed. “It’s probably the most valuable artifact we possess,” Hunt says.

From the sublimity of its architecture to the idiosyncrasy of its hair samples, Freemasonry (founded in 18th-century England and devoted to charitable works) is part of the syllabus for Mystic Orders and Secret Societies: Fraternalism in America. Taught by William Moore (GRS’99), a College of Arts & Sciences associate professor of American material culture, the class covers other groups, among them the Daughters of the American Revolution, the Knights of Labor (a late 19th-century labor organization), the Grand Army of the Republic (a fraternal organization of veterans of the Civil War Union Army, whose Lynn, Mass., hall the class also visits), and various African American and women’s organizations.

As you might have guessed from the Masons’ wide open tour for Moore’s class, the secrecy in secret societies depends on your definition of the word secret. Their rituals and activities, Moore says, arose before the internet and social media (even advertising) were around to publicize them. (Membership has its privileges in terms of viewing certain rituals and artifacts the public doesn’t see, such as Washington’s locks.) The syllabus includes a photo of Shriners (who are affiliated with the Masons) bedecked in their organization’s robes and headgear. Moore, who directs BU’s American & New England Studies Program, says his course serves up an academic answer to the obvious question: “Here are these guys dressed up in funny coats. What the hell is that about?”

In a timely reminder of these groups’ ongoing role in contemporary America, when Supreme Court Justice Antonin Scalia died in February, he was with brothers in an exclusive hunting fraternity, the International Order of St. Hubertus (a group not studied in Moore’s class). More than a magnet for influential public figures from Washington to Scalia, fraternal groups have played a broader part in the nation’s politics, the course argues.

The Anti-Masonic Party, the country’s first third party, won several electoral votes running a former attorney general as its presidential candidate in 1832. The party’s pledge: to wipe out Freemasonry. Despite their gilt-edged membership (besides Washington and Revere, Benjamin Franklin was also a member), the Masons drew opposition from those who thought its secrecy was un-American and its members un-Christian.

Hints of those conflicts linger today. The DaVinci Code was catnip for conspiracy theorists with its talk of masonic secrets. And while not denominational, the Masons require members to profess faith in one God, something the Vatican deems a renunciation of Catholic teachings on the Trinity and Jesus’ divinity.

Political science aside, sociologists “are interested in fraternal groups from the standpoint of what role do voluntary societies have,” Moore says. He cites Harvard’s Robert Putnam, whose book Bowling Alone laments the decline of social capital of the kind fraternal membership provided in its heyday. (Masonic membership, for example, peaked around 1960 and has since slipped.) These societies also provided such benefits as insurance to their members. But the groups have been divisive as well, setting up ins and outs that breed suspicions à la the Anti-Masons, says Moore.

Turner is taking the class both as a history major and a sorority member. “I was interested in learning a bit more about secret societies and the way they relate to my life,” she says of her membership in a sororal organization. You’d think a millennial, reared in the let-it-all-hang-out exhibitionism of the selfie age, would find the secrecy of fraternal organizations alien. In fact, she says, she enjoys the class in part because of the surprising parallels. Articles read in class posit that “people joined these societies because they were so bored with their day-to-day life. You could definitely argue that today, we are also so bored with our lives that we spend all this time cultivating an image of ourselves online.”

At one point during the tour, Hunt jokes that he’s waiting for the students to ooh and ahh at the magnificent rooms. In fact, they inspired a different kind of awe, Turner says afterwards. “It seems like … a sacred space, not in the sense of a religious aspect, but a space that clear is taken very seriously by the people who are Masons. It almost felt, like, inappropriate to make comments.”

In case you’re wondering, Moore has not joined a fraternal organization (although he was initiated into the Boy Scouts’ national honor society at age 15). It’s one of several areas where he separates his academic interests from his personal ones.

“I am a historian of surfing,” he says, “but I do not ride waves in my spare time.”

There are 8 comments on Class Unveils “Secrets” of Secret Societies

Class Unveils “Secrets” of Secret Societies
One Class, One Day
8
share this