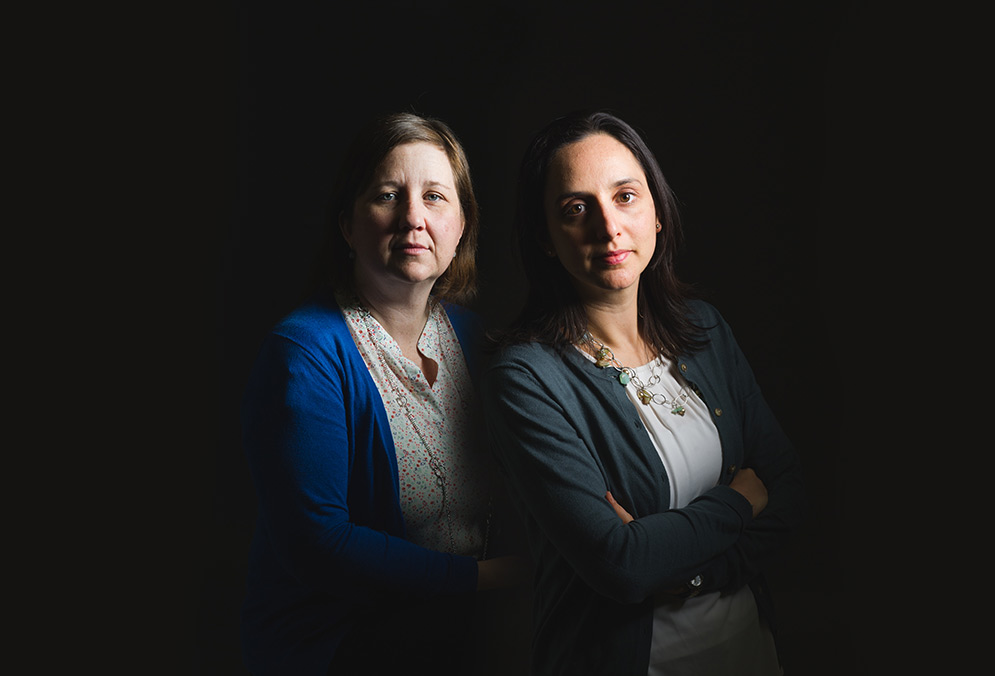 In this four-part series, BU Today looks at the work of BU researchers and medical experts who study and treat the causes and consequences of violence. Considered together, the four stories depict a vicious cycle of hurt, frustration, and vengeance that reverberates through every aspect of American life.

Like many freshmen, Jill had been a victim of bullying long before she arrived at college from her Midwest town. Elementary and middle school were especially difficult: classmates teased her, ignored her, or went out of their way to exclude her. Once or twice they spread rumors about her. That treatment didn’t end in high school, where the bullies were the popular kids. Looking back, Jill believes she was targeted because she was smart.

As she settled in at college, Jill felt confident in her ability to do her coursework. But she was homesick, and by spring, she was still struggling to find a circle of good friends.

Holt and colleagues collected data from 1,337 first year students at four different universities, looking for information about past victimization.

The first year of college can be a time of great growth and great stress, as students cope with life away from home, new friends, and more rigorous academics. Experts say it can be more challenging for students like Jill, who enter college with a history of child abuse, sexual assault, bullying, or other trauma.

But exactly how first-year students adjust to college—or don’t—isn’t clear. Melissa Holt, a School of Education assistant professor of counseling psychology, and her colleagues are trying to find the answers. By doing so, they hope to better understand how to help these students thrive.

“There really is this gap in research, in understanding,” says Holt, who has spent much of her career studying how the experience of trauma ripples through victims’ lives. “By default, many students who get to college are resilient in some way. But there really was not anything out there that said, if you’ve been victimized prior to college, how do you adjust in college?”

And because that first year is a make-or-break time for many students, she adds, “we knew that the first year was particularly important to understand.”

Holt and her colleagues, among them Jennifer Green, an SED associate professor of special education, began amassing data in 2012 to help tease apart students’ reactions to that critical first year. They asked first-year students—Jill was one of them—at four colleges and universities across the United States to complete a survey with questions about their experiences with victimization, including bullying, child maltreatment, and dating violence. They also asked about the students’ initial connectedness to college, their transition, and their social and emotional well-being. In fall 2012, 1,337 students filled out the survey, and the following spring 450 of those students took another survey. The researchers then contacted a group of these students in 2013 and in 2016, conducting personal interviews with a number of them.

“We expected that some students would have a hard time when they entered college or would have difficulty with adjustment, perhaps in part because they had experienced previous victimization or trouble with peer relationships,” says Green. “And we also anticipated that there would be students who would really do quite well in a new college context and would be very successful when they arrived at college in a way they were not in their K‑12 setting.”

The researchers have analyzed only the data from the first year of the study, but their work is already bearing fruit. Previously reported results published in the Journal of American College Health found that bullied students moving into college remain at higher risk for anxiety and depression, but many report an active social life, strong academic achievement, and a positive college experience. Although past bullying can be a burden, college offers young adults a chance to reinvent themselves. “For better or worse, I think that although I was bullied and it sucked, I wouldn’t be who I am today [without it],” one student said. “It’s been able to give me the confidence to be who I am.”

10.8 percent of students surveyed said they had experienced attempted rape. These students were typically among the students who reported polyvictimization, including sexual violence. The group was at greatest risk for depression during their first year of college.

The latest results from the team’s work, published online in the journal Psychology of Violence in August 2016, gives additional cause for both hope and concern.

One surprising result: peer victims generally didn’t report higher levels of anxiety and depression than the little-or-no victimization group. “So that piece is hopeful. That’s great,” says Holt. On the other hand, the polyvictims—especially those with a history of sexual victimization—experienced more anxiety and depression during the first year of college than their peers.

“What we’re finding is that the people who experience multiple forms of victimization might be at greater risk,” she says. “Also, since we know that sexual minority youth are at greater risk for victimization, one of our implications is that colleges should make sure they have someone trained in counseling LGBTQ students, and helping negotiate some of the unique challenges they might experience.”

Holt is quick to point out that increased anxiety, depression, and stress do not spell doom for first-year students. “If you’re victimized, you’re not destined to have this negative outcome. It’s not that simple,” she says. “It’s hard to get into college. If you’ve experienced all these prior victimizations and you’re in college, that’s fantastic. You’re resilient.”

“Whether it’s a college campus or youth in adolescence or younger, I think paying attention to that broader victimization history is so important to understanding what has gone on for that person,” says Holt. “Often we only understand those forms of victimization in isolation, and I think that is limited.”

This desirable, and somewhat elusive, concept of resilience, along with grit, has attracted increasing attention from both scientists and the public in recent years.

Resilience, according to the American Psychological Association, “is the process of adapting well in the face of adversity, trauma, tragedy, threats, or significant sources of stress—such as family and relationship problems, serious health problems, or workplace and financial stressors.” In an influential 2009 Social Science & Medicine paper on resilience in populations, which examined data from survivors of the 1999 floods in Mexico and the September 11, 2001, terrorist attacks in New York City, the authors describe resilience as “a process of ‘bouncing back’ from harm, rather than immunity to harm.” The paper also notes that “it has long been observed that people often function remarkably better than objective circumstances suggest they should.”

Sandro Galea, Robert A. Knox Professor and dean of the School of Public Health and an expert on trauma and resilience, says that a person’s response to trauma is driven by many factors, from genetics to childhood experiences to the nature of the trauma. He also notes that resilience—when, how, and if a person bounces back—is largely driven by context.

82.4 percent of students reporting polyvictimization, including sexual violence, were women.

“There’s a constellation of factors that determine resilience,” Galea says. “These include social support, protection from other stressors, and being surrounded by an environment where your experiences are understood.”

There’s evidence for this in a recent paper emerging from this same SED data set and published in the Journal of Child and Family Studies in June 2016. The study, by Gerald Reid (GRS’17), a doctoral student in counseling psychology in Holt’s group, found that perceived social support from friends, significant others, and especially from family might protect previously bullied first-year students from anxiety during their adjustment to college.

While Holt and her colleagues continue to parse the data from this group of students, they also hope to expand their research. “We’re interested in exploring youth when they’re in high school and then following them to different trajectories,” Holt says. “Some of them are going to go to college, some are going to the military, some are going to the workforce. What might it be about victimization that helps determine those pathways?

“Whether it’s a college campus or youth in adolescence or younger, I think paying attention to that broader victimization history is so important to understanding what has gone on for that person. Often we only understand those forms of victimization in isolation, and I think that is limited.”