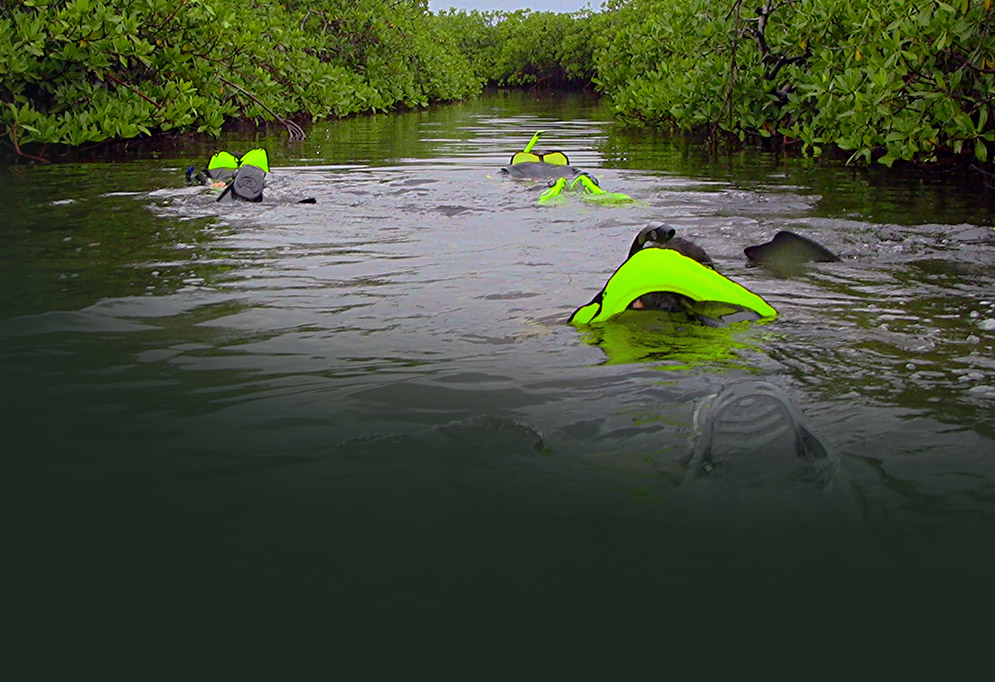 The photos evoke what a stoner must see while watching Fantasia: a kaleidoscope of vibrant-hued corals in all kinds of shapes. As striking as their colors and forms—although you wouldn’t know it by looking at the photos—is their neighborhood: they’re clinging to mangrove roots, not a place you’d expect to find them.

For four years, Boston University undergraduate students have snorkeled around an atoll off Belize to study mangroves, the “flooded forests” with roots breaking the water surface that are the membrane between islands and sea. It’s not research for the squeamish.

“We often saw large rays, barracudas, upside-down jellyfish,” says Zachary Bengtsson (CAS’15). The long days in the water could chill the body, and the students endured numerous stings and bites from jellyfish and bugs that didn’t appreciate intruders. Despite the discomforts, Bengtsson loved all of it. The highlight came in 2013 when the students, acting on a suggestion of their professor, Boston University Marine Program (BUMP) director John Finnerty, looked for and found corals, better known for living in magnificent reefs, not in underwater forests. 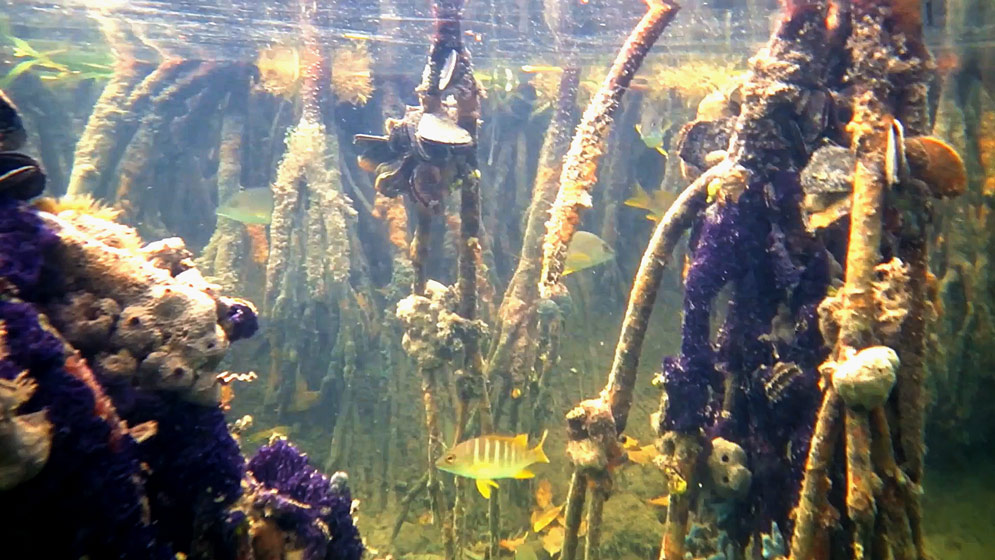 Only one previous study has reported that coral can also be found in mangroves.

Only one previous study had reported that coral can also be found in mangroves, which have canopies and shade that would seemingly block the sunlight corals need; the animals feed via symbiotic, photosynthesizing algae living inside them.

“All the major reviews about how important mangroves are talk about everything but corals,” says Finnerty, a BU College of Arts & Sciences (CAS) associate professor of biology and winner of a 2013 Metcalf Award for Excellence in Teaching. It’s unknown, for example, if corals migrate back and forth between mangroves and nearby reefs, he says.

Deciding to fill in some of those blanks, his students returned to Belize for a snorkeling census in November and December 2014. They’d paddle for three to five hours at a time around the mangroves, measuring, flagging, and photographing the coral population. They tallied about 30 species, looking hale and hearty, untouched by prolonged bleaching, the potentially lethal process corals use to expel their algae. 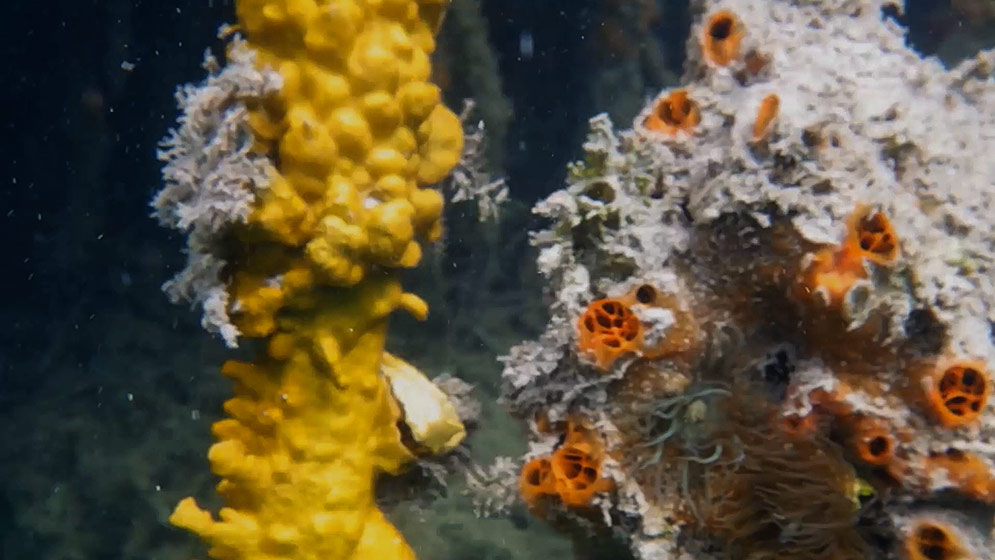 This matters because both corals and mangroves are endangered. Beyond being habitats for diverse creatures, mangroves are important sediment stabilizers that “basically establish land and make islands, just like corals do,” Finnerty says. But mangroves are being cut down around the world in the name of tourism. Case in point: actor John Travolta has supported a wildlife resort-cum-airport not far from the University-researched mangrove forest.

This will be self-defeating, says Finnerty: “You cut them down, and the island will disappear.” And what of the corals the mangroves house? Some of his students will return at the end of 2015, in a multiyear effort to track the size and health of the coral and other creatures. “We can ask, how are you doing one year later?” Finnerty says. “Have you grown substantially? How does a coral grow in a mangrove versus…in a reef or seagrass, where it’s getting more direct sunlight?” The students hope to measure sunlight and temperature in the mangroves to better define the corals’ needs. They also plan to transplant coral nubbins (pieces of coral pruned from the tips) from the nearby reef to various mangrove roots and see how they do. 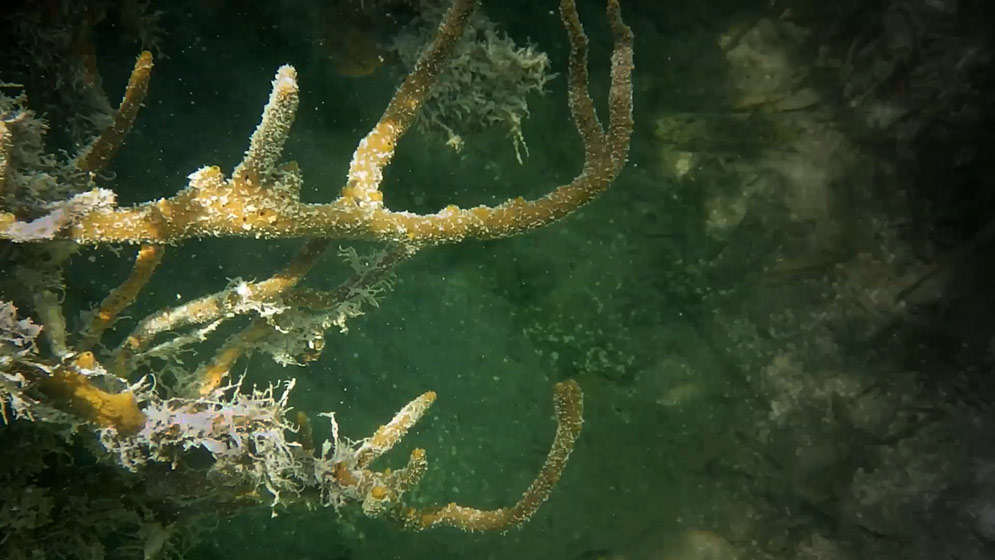 It could be that mangrove shade shelters corals from excessive sunlight, which can cause bleaching.

It could be that mangrove shade shelters corals from excessive sunlight, which can put their photosynthesis in overdrive, a destructive process that forces them to bleach off their algae, says Finnerty. That might make mangrove corals more resilient than their reef-dwelling cousins in a world warming from climate change. “That’s the really interesting possibility,” he says. “This may provide some sort of insurance for the reef against conditions that would cause massive dying.” It’s possible that only mangrove corals will survive rising temperatures; alternatively, it’s possible those corals could migrate to the reef and repopulate it should temperatures ever improve.

The BU work is important in part because much of the coral preservation effort needs to be better informed by science, Finnerty says. For example, attempts to restore dying reefs by transplanting corals onto them—what he calls the “Johnny Appleseed approach”—might introduce predator-prone species to a reef, turning it into something “like a buffet table.”

Bengtsson says that with little known about mangrove corals, “it’s really exciting to get the chance to research an area with so many unanswered questions.…We need to understand why these corals are here and what role they play in the greater ecosystem.”

Despite the sometimes daunting conditions, Kirsten Kuhn (CAS’15) says she found herself entranced by the “overwhelming beauty and mystery.…There’s something deeply interesting and ecologically important going on” in the mangroves.

Almost a dozen students worked on the research, and they hope to publish a paper in 2016 detailing the coral species they’ve found. Their work is funded through the Boston University Marine Program.