Albert Einstein once said, “The whole of science is nothing more than a refinement of everyday thinking.”1 This sentiment, shared by a community of self-professed science lovers, (myself included) is true. I think about science all the time. Like when I compare nighttime constellations to skeletal formulas of organic compounds. Or when I relate reading musical chords to the translation of amino acids from mRNA.

I cannot help it. It just happens. Which explains why, at 7pm on Tuesday, after the effects of a 4.6 magnitude earthquake shook the city of Boston2, I was Googling convergent and divergent plate boundaries. 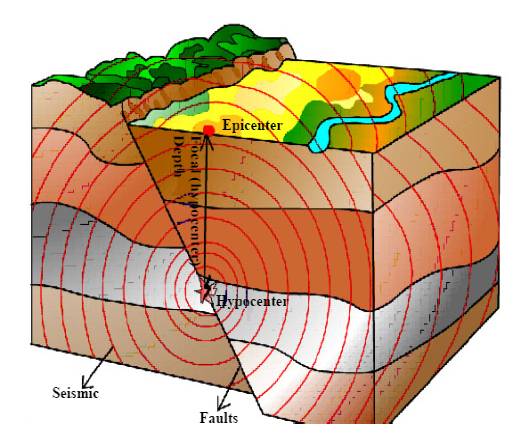 Diagram of an earthquake ll http://www.cwb.gov.tw

Earthquakes are a surprisingly common; thousands occur each day but are of such small magnitude that they are rarely felt. Contrary to popular opinion, these tremors do not only occur at fault lines where two continental or oceanic plates meet, but anywhere on the earth’s crust. As layers of the crust shift toward (convergent) or away from (divergent) each other, the resulting stress between the plates increases gradually. When this stress is suddenly released, seismic waves send vibrations throughout hundreds of miles of rock, initiating quakes on the surface as well as possible volcanic activity. The strength of the waves determines the quake’s magnitude on the Richter scale from 1.0 to 10.0; exceeding 7.0 is considered to be major3.

The earthquake felt on campus was the result of plate movement in southern Maine. I did not think there were many major fault lines in New England, but little tremors measuring less than 2.0 shake the Pine Tree State several times a year. In fact, in 2006, Maine experienced a slew of earthquakes caused mainly (haha) by the aftermath of last ice age.4

Even though the massive ice sheets that once covered North America have since melted, the crust is still recovering from supporting their weight.  Ice ranging from a mile to two miles thick pushed the Earth’s crust down by 500 feet, creating a landscape designed by centuries of mountain building and erosion.4

According to geologists, the continental plate under New England still has to rise about another 230 feet to recover from the weight of the ice age4. However, if the past is any indication of how gradual this recovery will be (and it is), future quakes will be rather minor and go undetected. So, instead of being too shaken up the next time you feel the ground move, double check for construction down the street.

Ashley Mayrianne Jones (CAS/COM ’14) is an ecology major and animal-lover from New Hampshire hoping to obtain a graduate degree in science and medical journalism. She can be reached at ashjones@bu.edu.