Are human-mediated changes to the environment destroying species?

Hercules is a liger, a lion-tiger hybrid. Photo Credit | Acarvin via Wikimedia Commons

His father was an African prince, his mother, a fiercely independent Indian huntress. By all laws governing society, geography, and biology, Hercules should have never been born. Yet in 2002, the newborn cub rose to fame as the largest hybrid feline at the Jungle Island Zoo in Miami, Florida. The lion-tiger mix inherited the best of both worlds, growing into a 12-foot-long, 900-pound carnivore with the capability of running 50 miles per hour and consuming 100 pounds of meat in a single sitting.1 His caretakers insisted that the birth was a mere “accident”, but can such hybridization ever be truly natural?

Hybridization, the interbreeding of two related yet genetically distinct species, is estimated to occur in at least 25% of plants and 10% of animals.2 A hybrid displays traits intermediate between those of its father and those of its mother, indicating either the creation of new characteristics or the introgression of genes from one taxon directly into another.3 Likewise, the species is identified by a portmanteau system of naming in which the first half consists of the father’s species, and the second of the mother’s species.4 The hybrid lineage may end with this newborn, the first member of the F1 (first hybrid) generation. For successful generations of hybrids to occur, the two parent species must share at least some breeding traits, be geographically and reproductively available to each other, and produce viable and fertile offspring. Often, members of the F1 generation will mate with each other as opposed to either of the parent species, thereby laying the foundation for the establishment of a brand new species with selective traits.3

Hybridization in the wild, especially among plant species, is essentially an indication of disturbance.5 Anthropogenic, or human, have facilitated an abnormal rise in hybrid mating.6 Such alterations to the environment could possibly result in decreased genetic diversity among species as unique alleles are is lost to a homogenized gene pool. Given enough time, the fit hybrids have the potential to replace their weakly adapted ancestors.2

It’s Getting Hot in Here…

One of the major anthropogenic factors affecting not only species hybridization, but the ecosystem as a whole, is an increase in global temperatures due to carbon emissions. The influence of the greenhouse effect, coupled with levels of carbon approaching 400ppm, has initiated the migration of species from warmer to cooler climates (and vice versa) as organisms attempt to maintain their ideal temperature ranges.7 As organisms encounter similar species in their new habitats, they may reproduce with them. A substantial number of natural hybridizations occurred during the post-glacial Pleistocene era when carbon levels exceeded those of today.8

The most recent example of temperature- mediated hybridization is between polar bears (Ursus maritimus), and grizzlies (Ursus arctos) in a hybrid tentatively referred to as a “pizzly” or “grolar” bear. In 2006, an Inuvialuit hunter from Victoria Island shot what appeared to be polar bear. However, the animal possessed characteristics of a grizzly, with brown patches of fur, long claws, a concave facial profile, and a humped back. DNA testing confirmed the individual to be first documented case of a polar-grizzly hybrid in the wild, a genetically possible but improbable phenomenon given the differing habitat ranges and breeding rituals of the two related species.7 Human-induced climate change, which has caused some animals to shift their range northward, may have driven grizzly bears into polar bear territory and grizzly bears have been recorded in Canada’s western Arctic Nunavut province periodically throughout the last 50 years. An alternate theory proposes that polar bears have been driven southward by the melting of the ice caps, bringing them into closer contact with grizzly bears. Three more hybrid individuals were reported after 2006, and scientists expect more encounters between grizzlies and polar bears in the future.

Deforestation and urbanization result in decreased habitat area, leading to increased competition between individuals and smaller populations. Habitat destruction may either isolate a singular region from a larger range, or can combine the ranges of several species via the removal of a natural barrier such as a mountain range or river way.3 Facing the deterioration of their territory, organisms extend their ranges to overlap with those of other individuals, leading to a higher density of individuals per unit space. Along the borders where one territory overlaps another, individuals are forced to share resources including food, shelter, and potential mates. Natural selection predicts that the most successful reproducers will be those most fit for the new environment, whether or not the parents are of the same species. 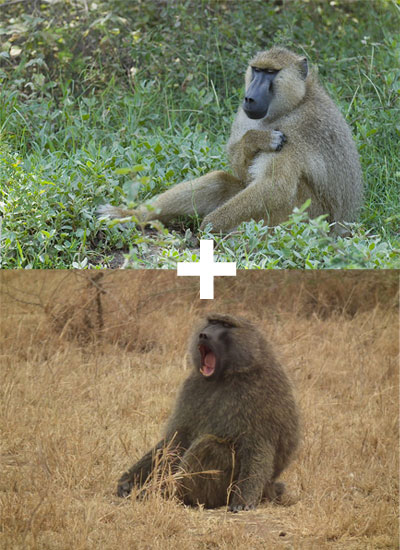 For example, yellow baboons (Papio cynocephalus) and Anubis baboons (Papio anubis) in Kenya did not interbreed 30 years ago; however, the proportion of hybrids has increased over time with the construction of tourist lodges.2 Historically, the yellow baboons occupied the south and east territories and the neighboring Anubis lived in the north and west. Typically, baboons stay close their natal locations, separated from other populations by physical obstacles like long stretches of waterless land. However, researchers observed an alternate immigration pattern of Anubis baboons that were foraging from tourist lodges. The immigration of Anubis coupled with their successful reproduction led to hybridization zones between the two baboon species. The hybrids are not selected against as would be if they had a genetic fitness lower than their predecessors. Male hybrids undergo puberty earlier in life than the purebred males and as a result, have higher reproductive and competition success. Researchers noted an increase in overall Anubis alleles in yellow baboon populations as well as in the number of offspring resulting from mating between hybrids. By 2000, almost 1/3 of the previously homogenous population had a mixed genome.2 Clearly, hybridization poses a great threat to the genetic integrity of indigenous populations, especially if interbreeding occurs with a non-native species.

Non-native, or invasive, species are particularly threatening to genetic diversity because they carry foreign alleles and often lack predators and diseases that would naturally eliminate them from the population. An invasive species may be more aggressive than its indigenous cousins, and thus more successful in finding mates. Genetic pollution from the invasive species may lead to homogenization or even extinction of the local population as its natural alleles are replaced.3 An invasive species, which tends to increase exponentially when colonizing a new territory, also has the potential to outnumber the area’s native individuals.

Introduction of an alien species may be accidental, as was the case of the marsh frog Pelophylax esculentus family, which is derived from a cross between P. lessonae and P. ridibuntus.9 Translocations of water frogs into new habitats have been associated with stocking of fish populations and garden ponds. The genetic integrity of native frog population has been aggravated by the recurrent introductions of alien species, and hybridization persists at a steady rate.  As the number of hybridogenetic individuals increases, scientists have been able to identify three subsets and potential new species of water frog, each adapted to a different geographic location. The hybrids have been shown to succeed in different environments given its heterozygotic nature, suggesting that the hybrid may eventually overtake one or both of its parent species.9 What does this mean for the future of this species, and so many others that have been genetically altered as a result of anthropogenic hybridization?

Not all effects of hybridization are negative; in fact, many individuals can benefit from reproducing with other species. An intermediate amount of genetic drift in a population corresponds to increased genetic diversity, allowing for new fitness characteristics including disease resistance and higher habitat tolerance.9 Hybridization can help to prevent extinction of rare and endangered species by preserving their unique homozygous alleles within the heterogeneous genome of the F1 generation. Yet the strong adaptive capability of hybrids can also work against the parent species if environmental conditions favor hybrids and thus change the relative fitness of the entire population. In this case, the presence of a very fit F1 generation may drive one or both parents to extinction.6

Still, there is no guarantee that a newborn hybrid will survive past birth, much less live to reproduce and replace its parent species. Many individuals suffer from embryonic fatality or premature death due to fatal recessive or deleterious mutations.9 Those that survive are often sterile, either genetically or physically, and therefore unable to reproduce and continue their lineage.3 In addition to mutations, hybrids may also inherit less-than-desirable traits from the weaker of the parent species, resulting in a reduced capability to handle physical stress. A poorly adapted hybrid may also display lower disease resistance, ineffective foraging ability, or reduced predation survival compared to its parents.10 Even though some hybrids inherit the “good genes,” there is an equal potential for a mixed genome to lead to the individual’s demise.11 Interfering with the process of natural selection certainly will not help anyone: humans, natural species, or anthropogenically-created hybrids.

What constitutes an organism as a hybrid? Biologists still lack an explicit operational rule to define species boundaries on genetic tree information.8 While some hybrids have been classified as new species, such as the red wolf, others have been denied the rights to conservation based on lack of genetic integrity.9 The decision whether to preserve a species or not is largely influenced by the method of hybridization, while natural hybrids are eligible for protection, anthropogenic hybrids are not.9 Yet in the case of endangered species, perhaps conserving hybrid offspring will be crucial in preserving their distinct alleles for the future. In either case, management of population biodiversity must be sustainable.10 Going forward we must ask ourselves what type of selection-natural or anthropogenic – will ensure the continuation of a species.

One Comment on Lions, Tigons, and Pizzly Bears, Oh My!