The Synapse Weekly – exploring therapy with a modern twist.

Robots are going to take over the world. Seriously! They’re all creepy and decidedly mechanic. Remember I, Robot?! Will Smith was trying to warn us. Don’t believe me? Look at the Svedka ads. Think there any similarities between that anthropomorphic robot and those seen in Smith’s 2004 blockbuster hit?

This thing is just waiting to kill you in your sleep. | credit http://www.svedka.com

The human race is doomed. WAIT, WAIT! HOLD THE PHONE.

This seal, which looks like stuffed animal, is actually a robot. Even better: it’s used for good. These soft and fuzzy robots were developed in Japan to interact with hospital patients undergoing long-term medical care.1 Known as Paro, this cuddly model is the eighth in a series of robots designed for therapeutic use.1

Paro works by “learning” about its surroundings. It is equipped with five sensory tools that measure mechanical pressure, light, sound, posture, and temperature.1 Each tool helps Paro understand something about its environment. The pressure sensors help indicate when Paro is being stroked or hit; the light sensors differentiate between light and dark; the posture sensors allow Paro to position itself in space.1 Paro is also able to recognize its name, basic commands and sounds.1

With all of these abilities, Paro is essentially an interactive stuffed animal. It hugs its owners, responds to verbal cues, learns preferred behaviors and can imitate a baby harp seal.1 All of this technology is amazing, but the most impressive thing about Paro is its rehabilitative services. In the United States, two nursing homes in Pennsylvania tested Paro’s effect on patients with Alzheimer’s disease.2 The nursing homes reported positive effects, likening Paro therapy to that of visiting animals.2 While the effects of Paro are comparable to live animals, there are a few extra benefits. Paro is hypo-allergenic, always available, and does not require intensive care.2 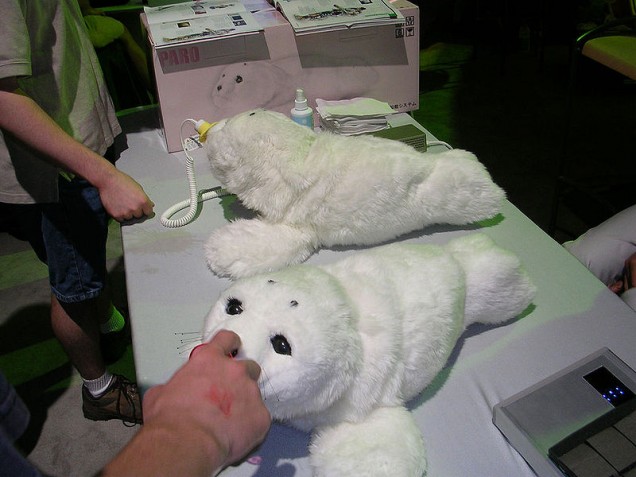 Paro Seals may be the future of robotic therapy. Credit | Aaron Biggs via Wikimedia Commons

Paro robots have been available in the United States since 2009, but are not often used.3 While cost is a minor factor ($6,000 dollars a seal), the biggest concern is ethical in nature.4 Those who argue against Paro therapy assert that humans – not robots – should be doing all therapeutic work.3, 4 By substituting human interactions with robotic interactions, there is a possibility that no true progress is made.3, 4 Paro supporters claim that Paro is not a substitute for human interaction, but a supplement for care.1, 4 Others are skeptical of Paro’s true therapeutic nature.4 Today, clinical trials are still in progress, and ethical debates continue.

Despite these ethical debates, one thing remains true. Unlike SvedkaBots, Paro is one cute and helpful robot.