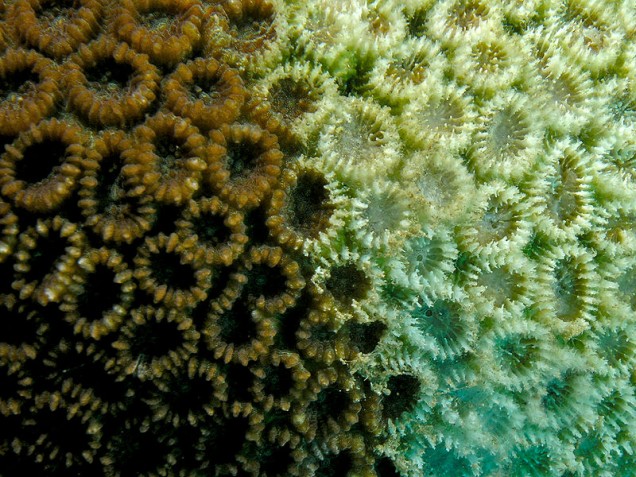 What if everything you relied upon for survival – your food, your home, your protection – was suddenly stripped away? This tragedy is currently happening to aquatic organisms like plants, fish, and other animals because of the alarming death rates of coral reefs. Corals, invertebrate animals with skeletons comprised of crystalline calcium carbonate, are at the very bottom of the food chain of oceans, feeding on phytoplankton and zooplankton.1 Coral formations like reefs cover an estimated 0.1-0.5% of the ocean floor in warm and tropical climates surrounding islands.2 Corals can only survive in a narrow optimal temperature range of approximately 73 °F-79 °F.3 The thermal limits signify temperature boundaries at which corals can live optimally; the slightest changes due to recent global warming trends, increasing CO2 levels, and over-nutrification are becoming disastrous. Because of their importance as a habitat for other organisms, the 80% decline in coral populations in various tropical and subtropical regions of the World Ocean is an increased threat to global aquatic biodiversity.4

Coral reefs are some of the most productive and diverse communities on the planet; they have many uses and provide many ecological services. Coral reefs function as physical barriers for currents and waves in the ocean, and over time, provide appropriate environments for sea grass beds and mangroves (as can be seen in Figure 1).2 Coral reefs’ high species assortment make this aquatic biome one of the most bio-diverse, providing homes and resources for countless marine animals.5 Corals provide a great deal of other ecological services. They act as a physical barrier that slows down erosion, which lets land build up, by blocking or slowing down waves from reaching the rocks of cliffs. Biotic services that offer suitable environments for nursing, spawning, feeding and breeding for a number of organisms, including algae, fish, sharks, eels, and sea urchins, are also provided by coral reefs. Furthermore, corals serve biogeochemical functions as nitrogen fixers in nutrient-poor environments.2

Corals also provide benefits to humans. They generate seafood products consumed and enjoyed around the world, and account for 9-12% of the world’s fisheries.2 Coral reefs contribute to the tourism industry by providing swimming and diving areas, as well as producing aesthetic goods like jewelry and souvenirs.5 Coral has also proven to be useful in the medical world, with successful use of coral skeletons in bone graft operations, and with the increased inclusion of coral reef substances in pharmaceutical products. Additionally, and most superficially engaging, is the contribution of household or public aquariums in the economy, which accounted for $24-40 million in 1985 and has been growing rapidly since.2 Knowing the importance of corals gives us motivation for assessing the causes and effects of coral population, and gives us insight as to why we should pay attention to this topic.

In total, corals contribute an estimated $30 billion to the global economy.6 However, a combination of disturbances, both natural and anthropogenic, or human-induced, has resulted in global declines of up to 80% in coral reefs over the recent three decades.7 This decline is worldwide, where parts of many reefs are being lost rapidly.8

One of the main causes of the approximately 80% coral population decline is an increase in global temperature, as a warmer climate leads to other underlying causes such as increased ocean acidity. 1, 4, 9. An approximate 34 °F-36 °F annual increase in water temperature in the tropical zones of the world’s oceans is likely caused by global warming.4 Prolonged exposure to increased temperature results in the partial or complete loss of corals. Since corals exist in environments dangerously close to the top of their upper thermal limit of 73 °F-79 °F, they are vulnerable to the thermal stress that causes mortality.3,7,10 Increasing anthropogenic carbon dioxide (CO2) leads to the warming of the atmosphere and the ocean; these rising upper ocean temperatures cause widespread thermal stress, resulting in a phenomenon known as coral bleaching.6 Coral bleaching is called so because corals lose their color and turn white when affected, since the symbiotic zooxanthellae are released from the host coral.2 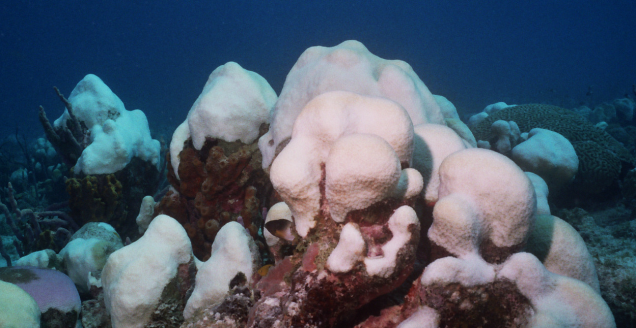 Coral bleaching is the result of calcification. Credit | Hazel Oxenford via Wikimedia Commons

Calcification, the process that builds calcium up into a solid mass, is depressed with increased temperature and CO2 levels; this depression inhibits coral skeletal growth and destroys coral health.7 Though corals can recover from bleaching events, these can still leave a negative impression behind on certain corals. Examples of coral decline after a large bleaching event can be seen in Figure 2. Coral bleaching can be caused by a decrease in salinity, due to run-off from clear cuttings and urbanization, as well as the release of poisonous substances like heavy metals.2

Atmospheric CO2 levels are currently 30% higher than their natural levels throughout the last 650,000 years, and in the last 200 years, approximately one third of all CO2 emissions have been absorbed by the ocean, affecting marine organisms at all depths.12 As carbon dioxide reacts with a body of water, the water surface becomes more acidic. This can negatively impact corals as well as countless biological and physiological processes such as coral and cucumber growth, sea urchin fertilization, and organisms’ larval development, especially for those who cannot survive outside a certain pH range.12 Ocean acidification caused by increasing CO2 levels decreases calcification rates in corals; this decrease results in a decline of coral populations.7

A similar large anthropogenic contributor to coral decline is water pollution through wastes from waterside construction sites and run-off from deforestation sites. Anthropogenic nutrification, the continuous excess nutrient enrichment of coastal waters, is a large contributor of coral population decline; populated sites have significantly higher levels of nutrients than underdeveloped sites, whereby the underdeveloped sites had increased coral cover.11 Corals must also endure mechanical damage from ships, anchors, and tourists colliding against them, which gets harder to do over time since the corals are not strong enough to withstand constant grazing and spillages.4

An essential part of saving coral populations from further decline is proper assessment of the situation. Researchers should evaluate biotic pigments like chlorophyll in the water around reefs since they play key roles in the uptake and retention of nutrients, which would better understand and improve nutrification problems.11 Aerial photographs, airborne sensors, and satellite images are in the future for quality observation and assessment of coral reef structures and communities.9 Remote sensing technology is also a plausible way to monitor coral reef growth in the future, and to find linkages between growth and different land processes so that we can better understand coral growth.13 Satellite imaging seems to be a good way to better our understanding of coral reef structure and growth, as well as potential threats to this diverse aquatic system through implementation of spatial and time-relevant data. Remote-sensing data is already in use to map and monitor coral reefs, and it is likely that this usage will increase in the future, due to these great advantages.6

The prediction of large-scale coral extinction is very real, with an estimated 80% of reef-building coral populations having been lost in shallow areas of tropical and subtropical zones.4 It is thought that coral bleaching will only become more frequent and intense over the next decades because of anthropogenic climate change that warming and subsequent water acidification will destroy coral reef-building capacities in the decades to come, and that oceanic pH levels will decrease 0.3-0.5 units by the end of the century due to continued absorption of anthropogenic CO2.9 Each of these factors will result in negative impacts on marine organisms.12 The future of coral populations is still very much undecided, but the balance can be tipped in the favor of saving corals if people are proactive about it. The effects of coral population decline have recently come into sight, but now it is clear what needs to be done to minimalize the causes so that coral populations can start steadily increasing. Major physical damage to coral reefs, usually mechanical, can require between 100 and 150 years for recovery, which puts into perspective how important it is for the planet’s inhabitants to make positive changes.14

1Keller, N.B. and Oskina, N.S. (2009). About the correlation between the distribution of the Azooxantellate Scleractinian corals and the abundance of the zooplankton in the surface waters. Pp. 811-822. Oceanology, 49; 6.