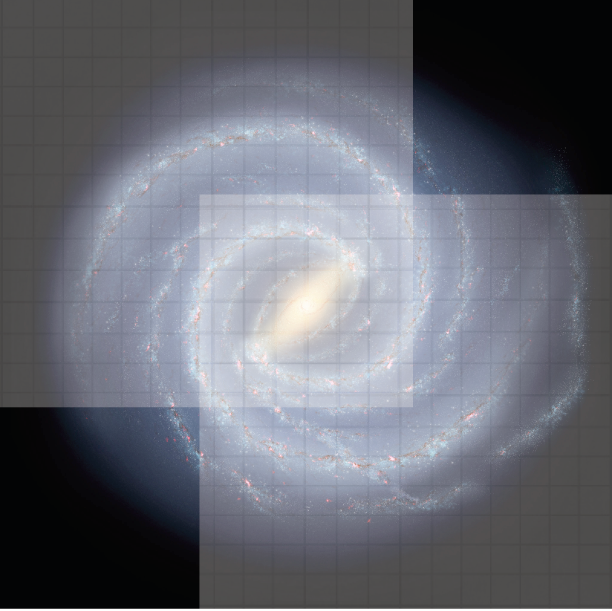 Scientists at Boston University are mapping carbon monoxide in the Milky Way. Illustration by Evan Caughey

A star is born! No, it is not the next American Idol, but one of the celestial bodies illuminating the night sky. Like you, researchers at Boston University have asked themselves how these twinkling objects come to be. To find out, the Astronomy Department initiated the Galactic Ring Survey (GRS) in 1998 in New Salem, Massachusetts.1 Along with the Five College Radio Astronomy Observatory (consisting of University of Massachusetts, Amherst College, Hampshire College, Mount Holyoke College and Smith College)2, BU began an eight-year-long project intended to scan and map out concentrations of carbon monoxide (13CO) gas in the Milky Way. 1 The main purpose of this research was to determine where future stars may form using 13CO gas, which is less common than 12CO or hydrogen in the universe, and thus allows for a narrower scope or error field.3

New stars are most likely to form in the galactic ring, a large area of the Milky Way found inside the solar circle.3. The ring contains 70 percent of all the necessary molecular gases crucial to star formation, including 13CO, 12CO, oxygen and hydrogen. 4 This region is important to the evolution and structure of our Galaxy. However, because the region dominates a large expanse of the Milky Way, it is hard to collect a complete image of the area, making it challenging to estimate distances to, from, and between star-forming regions.3 Most of the ring still remains to be researched; the GRS has only explored the areas between Galactic longitude 18o and 55.7o, only about 10 percent of the entire galaxy.1

New Stars and the Milky Way

Stars are the basic building blocks of any galaxy.5 The Milky Way alone has more than a hundred billion stars, and the capability of producing yet another billion.6 Stars contain and distribute many of the essential elements found in the universe: Carbon, Nitrogen, and Oxygen.5 In addition, stars act as fossil records to astronomers; their age, distribution, and composition of reveal the history, dynamics, and evolution of a galaxy.5

A side view of the Milky Way galaxy. Credit | Digital Sky LLC via Wikimedia Commons

Stars form within dust clouds at different rates and at different times over billions of years. The first form of a star, a mere infant blob of heated gases, is known as a Protostar. New stars are formed when a Protostar sustains nuclear fusions of hydrogen, which enable the development of a hot helium core by preventing the high temperature within to cause the collapse of the star.5 These stars then enter their mature state, a period that can last from just millions of years to more than tens of billions of years. The larger or more massive the star is, the shorter its life span. For example, the Sun is an average-sized star and is expected to stay in its mature state for another ten billion years.5 Small stars, which can be up to ten times smaller than the Sun, are known as Red Dwarfs, and are the most abundant form of stars in the universe. 5 On the other hand, the most massive stars can be up to 100 times the size of the Sun and are known as Hypergiants.5 However, these stars are extremely rare in our current universe because their life span is so short and their deaths is so violent.5 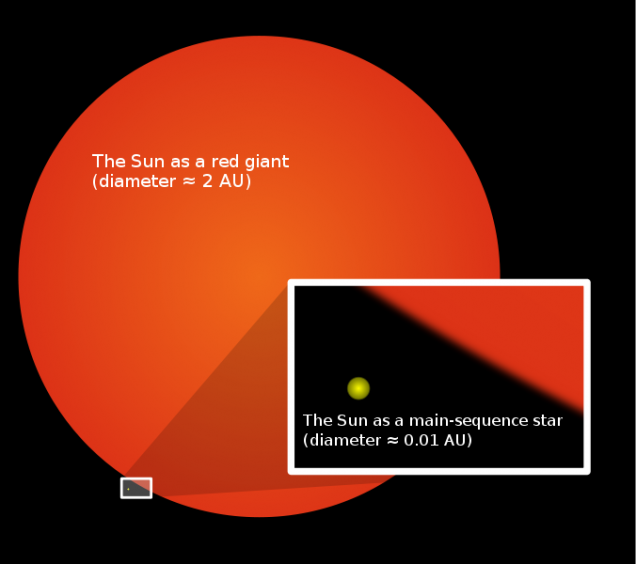 Near the end of its life, a star will often grow into massive red giant. Credit | Mysid via Wikimedia Commons

As stars begin to reach the end of their lifespan, hydrogen fusion within the star stops and temperatures inside the core begin to rise, causing the star to collapse.5 At this stage the star becomes a Red Giant. The dead star still produces heat and light as elements within the stars fuse with hydrogen outside the star’s outer layers.5 Depending on size, explosive and extravagant chemical and nuclear reactions may occur within the star.5 These reactions will ultimately determine what form the dead star will take. Most stars will become White Dwarfs; others, usually if they are larger, will form into Novae or Supernovae. Novae form when the outer layers of the dead star explode, while a Supernovae forms when the core of the dead star explodes.5 The remains of a dead star either form neutron stars, or black holes. Neutron stars are created when electrons and protons in the dead stars combine into neutrons as it collapses.  Black holes, are formed when the mass of the collapsing stars is three times larger than the mass of the sun and the gravitational pull is so strong it can pull anything within gravitational distance into its core.  At other times the remains of the stars incorporate into dust already present in the area and may contribute to the formation of planets, comets, asteroids or new stars.5 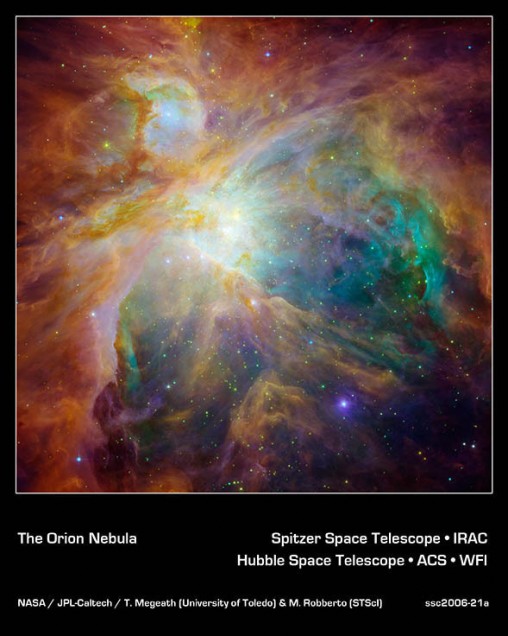 Using a 14-meter telescope with a beam-width of 117 cm, Boston University’s team of astronomers collected vast amounts of images that allowed for a wide range of research to be conducted. 7 The primary advances that emerged from this project were the ability to detect significant samples of star forming clouds, determining the distances of the star clouds and with the distances establish size, mass, luminosity and spatial distributions of clouds. 1

“The images we collected are beautiful, and show that the gas clouds in the Milky Way are not the round blobs we had imagined, but rather more like cobwebs or filaments,” commented Professor Jackson, one of the project’s designers. According to Professor Jackson, over 800 molecular clouds, which are found between stars with the potential to produce new stars, were discovered. 7 The temperature of these clouds was measured and it was discovered that they are very turbulent structures. Turbulence within clouds creates structures of gas and dust that increase in mass, and which collapse due to its own gravitational pull.5 As the gas and dust structure collapses, other materials at the core of the clouds heat up, becoming the basis of a Protostar.5 Each of the observed clouds seemed to have the same amounts of turbulence and thus the potential to become a new star.

Although the actual data collection of the project ended in 2005, the GRS continues to impact new research. 7 One of the largest areas still being researched is the structure of infrared clouds, which were first discovered in the solar system by the GRS. They are dense, cold clouds that will form large gas clumps. 7These clouds are cold because they are in the early stages of star-formation. 7 Eventually these clouds evolve into massive stars. 7

According to Professor Jackson, over one hundred research papers have used the data collected by the GRS, during and after its conclusion. 7

“I think the GRS data will be used for years to come,” stated Professor Jackson.

This publication makes use of molecular line data from the Boston University-FCRAO Galactic Ring Survey (GRS). The GRS is a joint project of Boston University and Five College Radio Astronomy Observatory, funded by the National Science Foundation under grants AST-9800334, AST-0098562, & AST-0100793.

4Where is M13? (2006). The Galactic Coordinate System. Retrieved March 4 2012, from http://www.thinkastronomy.com/M13/Manual/common/galactic_coords.html.