"The Little Magician" himself. Credit | Library of Congress

Perhaps the best part about spring semester are the long weekends scattered throughout the first few weeks of school. My personal favorite is President’s Day Weekend. The reasoning behind this is quite simple: presidents are awesome. Sure, this day in February is set aside for the more famous Abraham and George, but all presidents are pretty cool. This is because presidents are always controversial and even the boring ones have some sort of distinguishing characteristic (read: Martin Van Buren’s crazy facial hair).

One distinguished and controversial president suffered a severe case of polio at the age of thirty-nine, and went on to win the presidential office at age fifty.3 This president was Franklin Delano Roosevelt. His policies are famous, even today, and he brought the nation comfort during the Second World War. However, let’s focus on what made him even more awesome: his drive to overcome a devastating disease.

Poliovirus is an infectious virus that causes the disease known as polio, or poliomyelitis.3 Viruses differ from bacteria in that they are not truly independent, live organisms. Viruses are composed of a hard shell that encircles genetic material, which may be either RNA or DNA.4 The virus injects its genetic material into a cell, where it essentially hijacks the cell into producing viruses rather than performing normal life functions.3 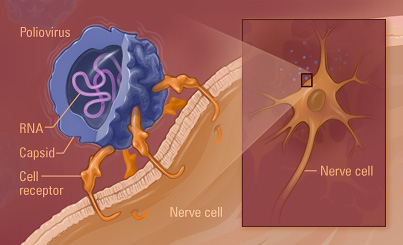 Polio presents itself in a variety of ways, depending on the degree of infection. Not all people infected with poliovirus show signs of the disease, and up to 95% of infected people are asymptomatic while remaining able to spread the disease.3 Of symptomatic patients, most experience flu-like symptoms followed by a full recovery.3 However, not all are so lucky. Approximately 1% of people infected with polio experience some form of paralysis.3 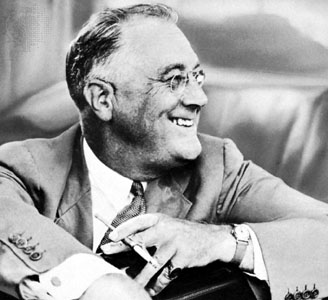 Of those paralysis-inflicted individuals, Franklin Roosevelt may be the most famous. Infected at the age of 39, Roosevelt fought to survive the disease.2 The road to recovery was not easy, and his age exacerbated the infection. At the time, the polio mortality rate for adults in the United States was six times higher than the child mortality rate.3 While Roosevelt’s survival is impressive, the poliovirus left him partially paralyzed. Not to be discouraged, Roosevelt continued combating the aftermath of his illness through intensive rehabilitation.2 Three years after his infection, FDR was able to walk with the aid of crutches.2

FDR was not the only American who suffered through poliovirus. Throughout most of the twentieth century, the United States suffered a polio epidemic.4 During this period, over 600,000 people suffered paralytic polio.5 For several years, nobody knew how the disease was transferred or how to prevent infection, which only added to the hysteria regarding the disease.4 Because of this, medical researchers dedicated a great amount of time to studying the virus, with support and funding from three philanthropic organizations.

These organizations are now known as the Rockefeller Institute, Rotary International and the March of Dimes.4 FDR himself founded the March of Dimes in 1938, inspired by his own experience with the disease. Money from Roosevelt’s organization funded clinical trials for two unique  vaccinations and provided free vaccines for thousands of children across the United States.4 The aggressive funding and vaccination of the disease led to the eradication of polio in the US, and other nations were soon to follow.4 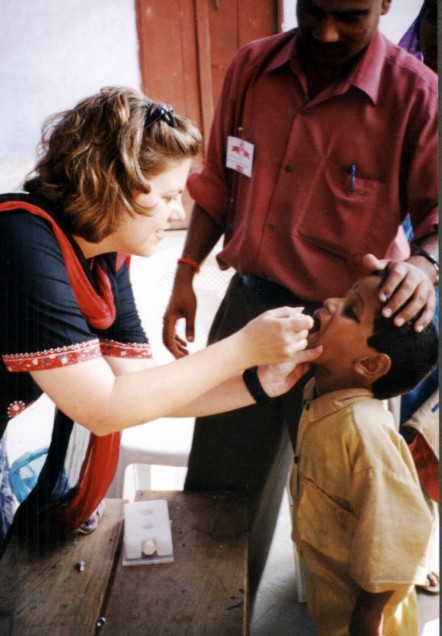 Most recently, India experienced its first year without any reported cases of polio.5 In a few weeks, the nation will confirm this with a variety of diagnostic tests.5 While India holds its breath for confirmation of this exciting news, it also prepares to vaccinate more children to prevent a resurgence of the virus.5 India is one of four nations still fostering polio infections, along with Pakistan, Afghanistan and Nigeria.5 These nations are known as endemic environments, which means that the disease is retained within a population without additional factors promoting the spread of the illness.5

The eradication of polio in India would be a major step toward eliminating the disease, but there is still much more work to be done. There remain three other endemic nations, and several African nations have been re-infected within the last year.5 Still, there is hope – and a lot of it is due to the perseverance of one of the United States’ presidents.

5 Post-polio Health International. (2011). PHI: Incidence Rates of Poliomyelitis in US. Retrieved from http://www.post-polio.org/ir-usa.html