The Science of Sunless Tanning

Aren’t you glad I didn’t get a real tan?

Some people tan, and some burn but Snooki Polizzi of Jersey Shore turns orange. Still, although the celeb may resemble a common citrus fruit, she may be doing her skin a favor by choosing tanning products over actual sunlight.

A “tan” is actually the body’s natural way of responding to the ultraviolet radiation. UV rays stimulate production of red, yellow, and brown pigments within skin cells called melanocytes. These pigments absorb the

UV radiation in sunlight over time in order to protect the cells from further damage. The amount of pigment within the melanocytes varies among skin tones and ethnicities, which is why individuals with lighter skin are more likely to burn than tan.

Aside from leaving a nasty burn, too much sunlight can have damaging results. Solar ultraviolet radiation (UV rays) come in two forms; UVB radiation, which gives the skin a bronze tint or a sunburn, and UVA radiation, which penetrates deep past the first few layers of the epidermis. UVA rays are not affected by latitude, altitude, or season and are not absorbed by the ozone layer. Extreme exposure to either type of UV ray initiates mutations within the melanocyte skin cells that can later lead to cancerous tumors. As the melanocytes reproduce to support an ever-growing skin layer, a few tumorous cells may multiply into thousands.

The damage caused by exposure to UV radiation is irreversible and accumulates over a lifetime.  According to the Skin Cancer Foundation, a single sunburn during adolescence more than doubles one’s chance of developing melanoma.1 Artificial tanning beds, which are between 10 to 12 times more powerful than the sun, triple the risk.2 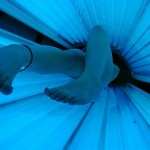 The damage caused by exposure to UV radiation is irreversible and accumulates over a lifetime. Is the tanning bed a safe alternative to natural UV? | Photo courtesy Wikimedia Commons via Flikr user Evil Erin

Sunless tanning gels, creams, and lotions color the skin without exposure to ultraviolet radiation.  The main ingredient in such products is C3H6O3, or dihydroxyacetone (DHA). DHA is a simple sugar derived from sugarcane, sugar beets, and the fermentation of glycerin.3 The colorless 3-carbon sugar compound binds with the first layer of skin, the stratum corneum. These “dead” skin cells lack a nucleus and organelles, and are thus unable to reproduce. However, the dead cells still contain keratin, an amino acid responsible for skin coloration.

When DHA chemically reacts with the keratin in the skin cells, there is a resulting darkening effect. These pigments, called melanoidins, range from yellow to brown, just like the natural melanin of the deeper skin layers. The “fake” color gradually fades as the dead skin cells flake off — typically within a few days. Prolonged water submersion or heavy sweating can lighten the tan by accelerating the shedding process.

You and Your Hue

Dihydroxyacetone is currently the only tanning product deemed safe by the Food and Drug Administration.4 There are no known health risks associated with the product, although some users have reported turning “orange” instead of the promised “beach-goer” brown. The reason is purely due to individual natural skin tones; concentrations of DHA can range from 2.5 to 10% or more to coincide with varying shades of light, medium, or dark skin. A lower concentration (lighter shade) product may be better for new users or those with a paler complexion.

Despite the apparent safety of the product, recent studies suggest that using a product containing DHA makes the skin more vulnerable to UV radiation in the first twenty-four hours of application. Guess that’s another reason why Snooki shouldn’t be allowed outdoors.