Dogs are “man’s best friends,” but do we know about their origins?

Uncovering the origins of the dog starts by looking at its genome.

Dogs have been beside us for thousands of years, but until very recently, little was known about both their genetic origins and their domestication process. Researchers around the world have been investigating dog genes from mitochondrial DNA (mtDNA), to compile complete genomes. The research has also given important insight towards the origin of the first dogs and the specific genes that cause diseases that both humans and dogs share, such as diabetes.

The Origin of Species 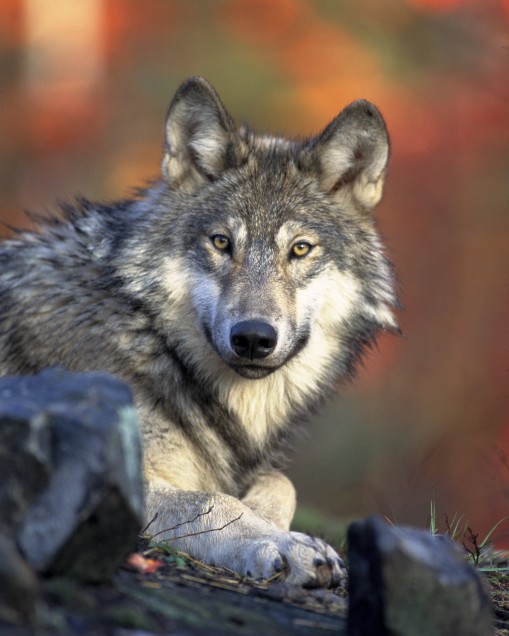 Dogs are direct descendents of the grey wolf.

Until canine gene research began, many people assumed that dogs were close descendants of wolves that were domesticated by primitive humans to aid in hunting about 15,000 years ago.1 Through gene research, scientists have been able to clearly prove that dogs are, in fact, straight descendants of the grey wolf (Canis lupus), and were domesticated as early as 45,000 to 135,000 thousand years ago. The domestication process of dogs began from separate and distinct populations throughout East Asia, which then interbred and backcrossed. Backcrossing, the breeding between an individual with its parents or siblings, allowed generations to develop homogenetic breeds. Researchers distinguished four maternal clades, or matriarchal lines, according to genetic differences. Each clade indicates the particular origin of a breed or group of breeds based on the breed’s genetic background, specifically the genetic of mtDNA. The largest and first clade holds the genes of most known breeds, further supporting the fact that dogs may have been domesticated prior to the dates that archeological records indicate. The other three clades were formed afterwards and encompass more specific and unique dog breeds. However, each clade gives insight into the original maternal lineage of modern dog breeds.2 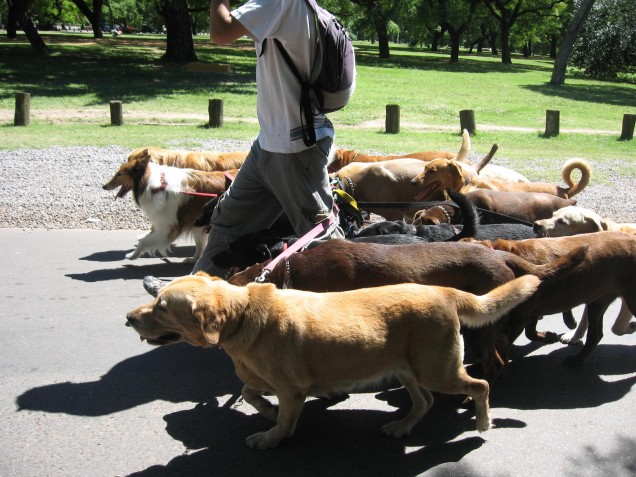 The selective breeding of dogs by humans has led to a wide variety of breeds.

Dogs are one of the first examples of human manipulation of nature. Primitive humans initiated the evolution of dogs by breeding specific phenotypes of wolves, even without our modern knowledge of genetics. Through selection against genes for aggression and other traits predominant in wolves, the first domesticated generation of “dogs” began an evolutionary change. Subsequent generations had less harsh or menacing features; limbs and bone structure became smaller and new traits such as barking, a unique trait that is distinct from a howl because of tone and pitch, emerged.1 Dog breeds were then created by humans who wanted a specific kind of dog: a herder, a hunter, a guard, or a guide. Scientists have determined that specific dog breeds developed because of controlled breeding and possibly pre-natal modifications, although the real mechanics of how dog breeds specifically emerged are still unknown. Through very close and controlled breeding, different breeds continued to evolve. Tracing the lineage of each specific modern breed is complicated, however, because mtDNA can only show the mutations that occurred in the early stages of domestication. Any modifications of genes found in mtDNA are those that occurred prior to the creation of modern breeds. In other words, the full extent of gene modification in modern breeds is still very much unknown and is currently being researched.2

To determine the lineage of individual breeds, loci research, which is based on the location of genes on chromosomes, has to be implemented. Loci research detects the genetic changes that might have occurred because of a genetic drift, of movement of a gene from one chromosome to another.2 This allows researchers to see divergence in allele frequencies and distinguish between breeds. Further research on loci has shown that dog breeds can be clustered by ancestry. Several clusters have already been determined: K2 includes all breeds of Asian origin, such as the Akita and the Shar Pei; K3 includes mastiff-type dogs, such as the Bulldog and the Boxer; and K4 includes working-type dogs and hunting breeds, such as the Collie and the Sheepdog.2

Early research began in the late 1990s, but advances were minimal because genetic research was predominantly focused on humans and mice. By 2004, however, scientists had created a fully integrated radiation hybrid map of a dog genome. An integrated hybrid map is a genome map made from DNA fragments which are divided through radiation. These fragments are then synthetically injected and reproduced inside a hybrid cell made from the DNA of two individual species.2 This allowed further research initiatives to identify specific breed genomes and to create a comparative map between human and dog genes. In 2005, the largest canine sequence, the Boxer genome, was made public. It revealed that dog genes replicate at lower rates than humans and the deletions or insertions of nucleotide bases are rare. Following this discovery, mapping of other breeds became easier because similar sequences, certain genes that are linked together, divide dogs into two groups with similar gene structures. One group probably developed from the first domestication and the second from specific breeding. Therefore genome-wide association mapping can be used for later construction of breed genomes.2 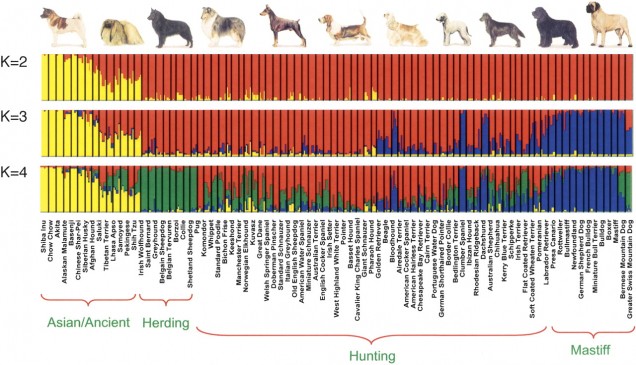 This chart shows the different allele frequencies found in the K2, K3, and K4 cluster.

Because the canine genome has fewer reported genes than the human genome, and is more primitive in content, it allows for an easier insight into disorders present in both human and dogs, such as cancer, diabetes and narcolepsy. Diseases linked to specific dog genes and loci can help identify similarly linked genes in humans. This advancement allows human biologist to identify the mechanisms that may cause certain diseases, and to identify the interaction between genes and their effects on diseases. For example, the discovery of the gene that targets narcolepsy on dogs has indicated how certain genes in the human body relate to our sleep patterns and disorders. It has also opened a new approach to cancer research. By identifying the sources, origins, and developments of cancer and tumors in dogs through canine genes, researchers may understand the predisposition and susceptibility of genes to cancer.