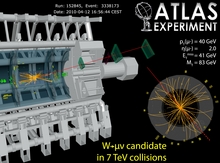 The ATLAS experiment is a large detector system developed by a collaboration of physicists from around the world to study very-high-energy proton-proton interactions at the Large Hadron Collider (LHC) at CERN, a laboratory for high energy physics near Geneva, Switzerland. This experiment will probe the origins of electroweak symmetry breaking and the particles associated with the new physics (such as the hypothetical Higgs Boson) that must appear at energies at the symmetry breaking scale. Boston University personnel were involved in the construction and installation of the muon detectors for ATLAS. The detectors occupy a region the size of a five-story building and will measure the trajectories of muons in a magnetic field with a precision of better than 1/10 of a millimeter. This permits the determination of the muon momentum, which will be an important ingredient in searches for new phenomena at the LHC’s energy scale, which will be an order of magnitude greater than currently available. Boston University also played a leading role in the development of computing and analysis tools that have been crucial since the experiment’s inception. It is expected that many important discoveries in particle physics will be made at the LHC in the coming decade. These discoveries will improve our understanding of the fundamental particles and their interactions, and also of the nature of the early universe. One important goal of the LHC is to search for particles that may be responsible for the so-called “dark matter” of the universe. Possible candidates for this mysterious phenomenon are the particles associated with supersymmetry theories.