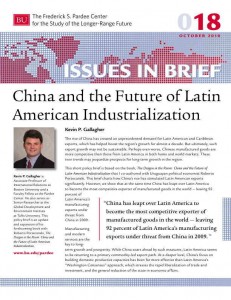 China and the Future of Latin American Industrialization
By Kevin P. Gallagher

The rise of China has created an unprecedented demand for Latin American and Caribbean exports, which has helped boost the region’s growth for almost a decade. But ultimately, such export growth may not be sustainable. Perhaps even worse, Chinese manufactured goods are more competitive than those from Latin America in both home and world markets. These twin trends may jeopardize prospects for long-term growth in the region. Based on research for his most recent book, economist and trade expert Kevin Gallagher discusses how China’s rise to prominence on the world trade scene has affected Latin America and what Latin America might learn from China’s ascendency to improve the long-term outlook for its own economic future.

Kevin P. Gallagher is Associate Professor of International Relations at Boston University and a Faculty Fellow at the Pardee Center. He also serves as Senior Researcher at the Global Development and Environment Institute at Tufts University. This policy brief is an update and expansion of his forthcoming book with Roberto Porzecanski, The Dragon in the Room: China and the Future of Latin American Industrialization.