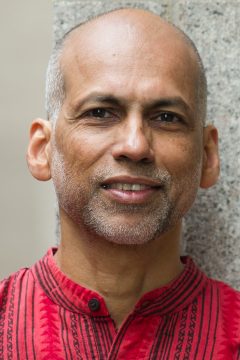 André de Quadros, music educator, conductor, ethnomusicologist, writer, and human rights activist has conducted and undertaken research in over forty countries. His professional work has taken him to the most diverse settings, spanning professional ensembles, and projects with prisons, peacebuilding and reconciliation, psychosocial rehabilitation, refugees and asylum-seekers, poverty locations, and victims of torture and trauma.

He is deeply committed to justice and equity, peacebuilding and reconciliation. During the Iraq war, in 2008 and 2012, he co-directed Aswatuna: Arab Choral Festival in Jordan that brought together community choirs from Iraq, Jordan, Lebanon, Palestine, and Syria. Since 2010, he has co-directed the Community Heartsong, a historic project with young Palestinian and Israeli choral musicians in East Jerusalem working to foster understanding between the two communities. Common Ground Voices based in Jerusalem has been a space for building understanding through grassroots peacebuilding efforts.

For nearly a decade, André de Quadros has worked in Massachusetts prisons, jails, and detention centers with a focus on empowering people in incarcerated settings to tell their stories through improvised music, song-creation, poetry, movement, and theater.  The approach co-created by him is called Empowering Song.

As a public intellectual engaging with community, he has given countless international talks, lectures and workshops with community groups. Most recently, he co-founded the justice-focused media initiative, The Choral Commons, a media space for podcasts, webinars, educational resources, and choral creations with a focus on social justice projects.