Background: There are many opportunities in the emerging area of vehicular networking. These span from providing basic Internet access to enabling communication for autonomous control of the entire transportation infrastructure in a way analogous to packet switching in computer networks (see our recent vision paper). Many of these opportunities focus on real improvements on system efficiency, congestion, and driver safety, but some also deal with improving the driving experience.

Description: There are significant technological hurdles in realizing our transportation vision. In particular, safety-critical applications such as active braking require new levels of system performance which are difficult to guarantee with conventional networking techniques. Moreover, the lack of infrastructure for an intelligent transportation system is a barrier as is the expectation of systems that must accommodate a wide range of technology adoption. 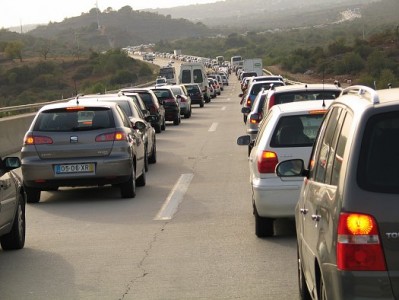 Our research focuses on the communication aspect of the vision as a medium to enable technologies to be efficient, reliable, and resourceful. Providing communication under these conditions requires new adaptations of existing models by synthesis of concepts from wireless communications, cellular telephony, mobile ad hoc networking (MANET), and opportunistic and delay tolerant networking (DTN). While there are several proposed architectures for implementing vehicular communication, the standard likely to emerge is one proposed in the IEEE 802.11p. The physical layer of 802.11p is a dedicated short-range 5.9 GHz for communication among vehicles and with roadside infrastructure. Due to the extent of our current and future transportation systems, any emerging communication system is likely to be hybrid, being comprised of ad hoc mobile and mesh components plus fixed roadside access points or cells. Below we summarize some of our recent activity in this area.

High data rate communication among moving vehicles is difficult to achieve in a general sense. Localized communication is most promising using direct communication (a la CB radios), but mobility conspires to interfere with any stability of a formed network. Roadside infrastructure such as cell towers is costly and not well adapted to the demands of either high data rates or data sources that operate continuously. The latter point — the exclusion of services such as telemetry — is perhaps most interesting in transportation networks but would require massive provisioning in each cell. This suggests that future systems might exploit both mobile (MANET) and fixed infrastructure (access points or cell towers) as well as in-network processing to reduce communication out of a local region for sensing and control applications.

To this end, we are investigating routing protocols for communication that account for localized consumption of data, high mobility rates of vehicles, and the fragmented nature of the vehicular networking environment. We have drawn upon related research in MANETs and DTNs, proposing a novel routing scheme (ITSC05). The scheme is a simple and adaptive protocol that relies on labeled data to make distributed routing decisions. Further, we have developed a model to emulate the message passing behavior in the vehicular networking environment (INFOCOM ‘07). With the help of this model, we show that messaging can be achieved even when the network is not fully-connected. This model characterizes the performance of the messaging protocol under various vehicular traffic conditions.

Parking in urban areas is often a painful experience, especially during popular events (e.g., during baseball games at Fenway Park here in Boston or weekends near popular restaurants). We have explored the use of mesh networks of wireless parking meters operating in conjunction with mobile devices in automobiles (IEEE VTC 2002). With such a system, many variants on the parking paradigm are possible such as spot reservation, time-tiered pricing models, and automatic ticketing. In 2006 we subsequently investigated and developed a prototype system with the help of an undergraduate design team for sensing vehicular occupancy at meters using wireless sensor motes. The motes are connected through a gateway that populates a database that is accessible via the Internet and Google Maps (ParkSens).

A challenge with high mobility rates in vehicular environments is the short duration of connectivity available. To compute results on statistics such as waiting times at toll booths or traffic rates on sections of the highway, data must be collected from many nodes in the environment. We are considering techniques for congestion monitoring using sampling methods and in-network processing. This scheme leverages our work in labeled data — data that can be propagated within the system without strict custody transfer but rather using attributes that guide the dissemination process in a stateless manner.

Internet-based video sources are increasingly popular as network capacity tolerates their bandwidth consumption. The availability of these sources permits emerging applications such as large-scale parking space occupancy monitoring (IPark), traffic monitoring, and security. In our efforts to develop low-cost, in-network video sensing capabilities (e.g., CESN 2007) we have recognized that many applications will exploit mobility. Problems abound in image processing dealing with multiple cameras, fields of view, and occlusion; especially when attempted on low-cost embedded computer devices.

We are investigating the application of image recognition techniques to determine vehicular traffic flow conditions on highways (we have a network of video cameras positioned to track vehicles across multiple fields of view on the Massachusetts Turnpike). Recently, mapping companies such as Google and NAVTEQ have implemented projects that capture images of streets to provide a map user a real perspective of the location. We are investigating techniques for equipping vehicles with cameras that use images to enhance the driving experience. Examples include the use of images to gain perspective on inter-vehicle distance beyond the line of sight and image recognition of road signs to alert a driver of special zones or speed limits.