Background: The supply of commercially available wireless spectrum through authorization by the Federal Communication Commission critically lags behind the recent and anticipated increase in demand. This disparity has been fueled greatly by the explosive rise in the usage of smart-phones and numerous on-line applications that run on them. Recent deregulation initiatives aim to alleviate this looming wireless spectrum shortage. Thus, they enable providers to lease their excess spectrum for secondary usage. Efficient and robust pricing policies are an integral part of the success of these deregulation efforts. 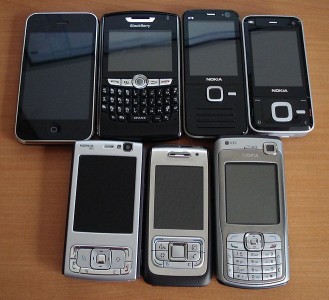 Description: We investigated how a wireless spectrum provider should optimally price its excess spectrum to secondary users whose arrival rate is regulated by a price-dependent demand function. On the one hand, a provider must ensure that the quality of service of its primary users, who typically have long-term contracts, is not significantly affected by the admission of secondary users. This is because presence of secondary users may increase the blocking of primary user calls and hence lead to a punishment in the form of loss of business due to poor service. On the other hand, the provider is interested in attracting as much traffic from secondary users as possible and maximizing its profit. We set our goal to find a pricing policy that satisfies this objective. A pricing policy is a rule that dictates which price should be advertised by the provider at any given time. We showed how to compute the optimal pricing policy using stochastic dynamic programming. The optimal policy advertises prices (possibly different) according to the occupancy level of the spectrum. We also investigated the design of computationally efficient single-price policies. We showed that a threshold policy is the optimal single-price policy and performs close to the optimal policy. Under mild assumptions imposed on the demand function, we showed that threshold policy generates profit as long as the optimal policy does. In addition, we showed that its profit is unimodal with respect to price, which enables efficient computation of the optimal threshold policy. We took advantage of this property and introduced an online threshold policy that operates by measuring the reaction of secondary users to a specific price and does not require the demand function to be known. We further provided an adaptive version of this algorithm that adjusts the operating price and threshold to changing demand function and call statistics.

Results: In the figure on the left, we demonstrate the performances of the optimal, threshold and static policy. Static policy is a single-price policy that is shown to perform efficiently when all users can be regulated by price. However, in the presence of primary users, its performance worsens significantly while the threshold policy that we proposed receives nearly optimal results. In addition, we provided simulation results showing that the online threshold policy and its adaptive version closely follow the optimal profit without the knowledge of the demand function. Finally, we showed that the pricing policies mentioned above, which we classify as occupancy-based policies, are insensitive to call length distribution.  We provided numerical evidence that the optimal occupancy-based policy performs close to the optimal general policy, which depends on the call length distribution. 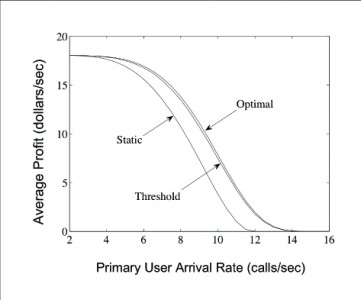