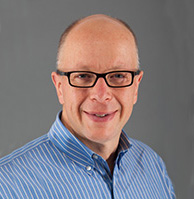 Mark Crovella is Professor and Chair of the Department of Computer Science at Boston University, where he has been since 1994. He also currently serves as Chief Scientist of Guavus, Inc. During 2003-2004 he was a Visiting Associate Professor at the Laboratoire d’Infomatique de Paris VI (LIP6). He received a B.S. from Cornell University in 1982, and an M.S. from the State University of New York at Buffalo. He received his Ph.D. in Computer Science from the University of Rochester in 1994. From 1984 to 1994 he worked at Calspan Corporation in Buffalo NY, eventually as a Senior Computer Scientist.

His research interests center on improving the understanding, design, and performance of parallel and networked computer systems, mainly through the application of data mining, statistics, and performance evaluation. In the networking arena, he has worked on characterizing the Internet and the World Wide Web. He has explored the presence and implications of self-similarity and heavy-tailed distributions in network traffic and Web workloads. He has also investigated the implications of Web workloads for the design of scalable and cost-effective Web servers. In addition he has made numerous contributions to Internet measurement and modeling; and he has examined the impact of network properties on the design of protocols and the construction of statistical models. As of 2014, Google Scholar reports over 20,000 citations to his work. He has given numerous invited talks and tutorials, and is a founder of and consultant to companies involved in Internet technologies.

Professor Crovella is co-author of Internet Measurement: Infrastructure, Traffic, and Applications (Wiley Press, 2006) and is the author of over two hundred papers on networking and computer systems. He holds ten patents deriving from his research. Between 2007 and 2009 he was Chair of ACM SIGCOMM. He is a past editor for Computer Communication Review, IEEE/ACM Transactions on Networking, Computer Networks and IEEE Transactions on Computers. He was the Program Chair for the 2003 ACM SIGCOMM Internet Measurement Conference and for IFIP Networking 2010, and the General Chair of the 2005 Passive and Active Measurement Workshop. His paper (with Azer Bestavros) “Self-Similarity in World Wide Web Traffic: Evidence and Possible Causes” received the 2010 ACM SIGMETRICS Test of Time Award, and his paper (with Gonca Gursun, Natali Ruchansky, and Evimaria Terzi) “Routing State Distance: A Path-Based Metric for Network Analysis” won a 2013 IETF/IRTF Applied Networking Research Prize. Professor Crovella is a Fellow of the ACM and the IEEE.