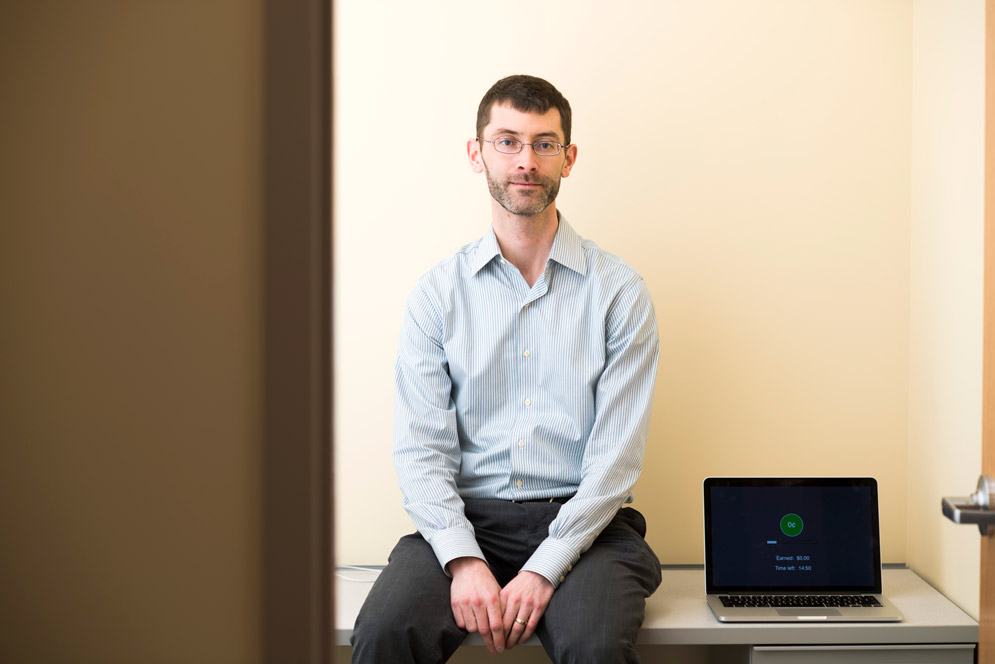 “Attention, Green Line passengers. There is a service disruption due to some track repairs. Shuttle buses will be available between Kenmore and Arlington stations.”

Regular MBTA patrons know what it feels like to learn about a service change. Thoughts and questions pile up. This train is standing-room only. What if I can’t make the first shuttle? Do I wait for another? I really need to get to that event. How long should I wait? Think of an alternative. How far is the Arlington T station by foot? What’s the price of an Uber to get there?

To Joe McGuire, this calculus represents the type of real-world experience that drives his basic research into decision-making. In his Cognition & Decision Lab, McGuire, a College of Arts & Sciences assistant professor of psychological and brain sciences, zeroes in on the neural processes we use to make choices based on available information and our experiences. He develops theories that help us understand how we choose.

“When people make decisions, they’re doing it in complex and challenging environments where it’s not always clear what’s going happen if you do this or if you do that, and you might not get to find out for a while,” he says. “We want to know how people use the information they do have to make the best decision they can.”

For example, deciding how long to wait for a future reward—such as the T shuttle bus—when the timing is uncertain. “One of the most important things people have to be able to do is to be flexible, to be able to adapt to different situations and environments,” McGuire says. “And when you become interested in a question like how does self-control work? it’s possible that the answer will look very different in different situations. In our laboratory tasks, we look at situations where in one case successful performance means being extremely patient and in other cases successful performance means cutting your losses.”

His research, at the intersection of neurobiology and the social sciences, offers the potential for interdisciplinary collaboration, says Paul Lipton, a CAS research associate professor and director of the undergraduate program in neuroscience. “We have behavioral economists in the department of economics keyed into understanding the economics of decision-making and the psychology behind the motivation of those decisions,” says Lipton. “These intersections are becoming stronger and Joe’s work, in neurobiology, is adding to that the brain systems that support different strategies by which one makes decisions.”

Decision science is a field that has gained currency in popular culture and the media. Two of the most famous practitioners have won the Nobel Prize in economics: Daniel Kahneman (in 2002), known for his experiments with his late collaborator Amos Tversky that showed how cognitive biases influence our judgments, and Richard Thaler (in 2017), who has demonstrated that government policies can nudge people to make beneficial decisions, such as picking a mortgage that makes financial sense. Their books, along with those of other researchers, like Angela Duckworth (Grit: The Power of Passion and Perseverance) and Dan Ariely (Predictably Irrational: The Hidden Forces That Shape Our Decisions), have been national best sellers.

McGuire, who joined the BU faculty in 2015, attributes the rising interest in this work to a broadly shared urge to understand our actions. It’s a desire he shares. “What grabs my interest about it is that it’s puzzling oftentimes why people do what they do, why we ourselves could do what we do,” he says. “We don’t have perfect insight into even our own decisions and our own cognitive processes. Everyone wants to know why people differ from one another in what they choose and the outcomes they end up with.”

Advances in technology play a role in the field’s rise. Researchers like McGuire use functional magnetic resonance imaging (fMRI) in experiments that correlate changes in brain responses to stimuli. This technique yields a statistical analysis of the magnetic properties of oxygenated blood flowing to parts of the brain that can be rendered in colorful images. (In the images, scientists can see patterns of brain activity evoked by a task or stimulus.) The journal Nature notes that fMRI has emerged as a “workhorse of brain imaging” since its debut in 1992, and that 2010 saw an average of four studies relying on fMRI published every day.

McGuire uses fMRI and other techniques to test theories about cognitive processes. A 2015 paper he published in Nature Neuroscience with coauthor Joseph Kable of the University of Pennsylvania, used fMRI to examine how people calculate the costs and benefits of waiting for a reward. An analysis of brain activity suggested that people reassess the value of the situation based on how they experience the delayed reward. Sometimes they wait and other times they do not; they calculate their actions in a dynamic way, rather than from a fixed idea that persisting is the right option every time.

This finding challenges the assumption that persistence is always a good quality. “Certainly in many situations, educational achievement and areas like that, the way to do well is to keep at something,” McGuire says. “On the other hand, it’s also possible to persist at something so long that it becomes counterproductive. What we’ve been really interested in studying is situations where as time goes on, while you’re waiting for something or working towards something, you might be revising, and updating, and reestimating your expectations about it.”

In one of the meetings of his course Introduction to Cognitive Psychology, the subject is perception. He shows the 60 students a pair of textured patterns on a projection screen. The first is a set of vertical ridges. The second is more difficult to discern, but becomes recognizable as the same pattern slanting at an angle. Why is the second one harder to see?

In discussion with students, McGuire explains how the visual cortex is more responsive to cardinal orientations (think east, west, north, and south) than oblique orientations (the slanted image). We are wired over millennia and then trained to recognize certain patterns. He uses an audio sample to show that the idea applies to hearing: an unfamiliar or unusual speech pattern is harder to comprehend than a familiar delivery. Sometimes, McGuire replies to a student’s question, our expectations for these patterns can change based on our recent experiences, making previously unexpected perceptions more easily discernible.

The lecture and lab course, with outside reading assignments, like the late Oliver Sacks’ writing in The New Yorker about face blindness, in addition to a textbook, has several goals. McGuire wants to show that it’s possible to turn abstract topics like perception and decision-making into measurable actions. He is introducing the would-be neuroeconomics students to typical research questions, but for other students, he says, “it’s useful to know a little bit about how people’s minds work. So whether you’re deciding how to vote or whether you end up working in law or in medicine or any number of things, these topics can matter.”

“We’re really enthusiastic and excited to have Joe McGuire on our faculty,” says Chantal Stern, a CAS professor of psychological and brain sciences and director of the Cognitive Neuroimaging Center.

Stern says McGuire is adept at bringing his research to basic situations that people face. Take waiting for email responses, for example. Some people will reply immediately. Others will respond the next day. After a few days, most people assume they won’t hear back. McGuire creates mathematical models around this cognitive behavior, and through the use of fMRI, examines the interactions between brain structure and brain function.

An example of such decision-making: when McGuire came to Boston to give a lecture to the faculty as part of his job interview, a blizzard threatened to close the campus. Stern told him he could postpone the meeting, and he ended up staying for three days before he could deliver his lecture. “At that time, he made it clear the wait was worth it for him,” Stern says. “That is a good example of the sort of thing he is studying at a basic science level—how you make those decisions. They are really complicated decisions from a behavior standpoint. How does a brain figure those out?”

Which brings us back to the T shuttle. The answer about whether to wait for a bus or take an alternative route—as with all decisions in such situations—depends on the information you see now and what you have seen in the past.

“First of all, things like persistence are more a matter of getting yourself calibrated properly to your environment than about forcing any particular outcome, always waiting or always not waiting,” McGuire says. “Then, second, when you see what someone else has done, you’re inclined to say they’re chasing sunk costs, or they’re lacking self-control. Sometimes, it’s because they’re working with different information.”

Author, Michael Goldberg can be reached at mihaelscottgoldberg@gmail.com.